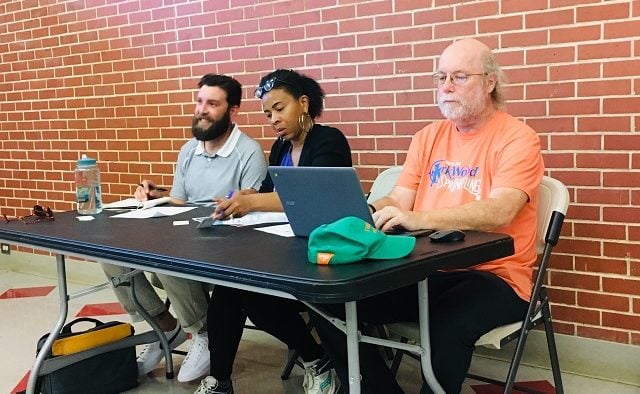 Presentations on the ongoing improvements to MARTA and the sewage system in the Sugar Creek basin were the main focus of the NPU-O meeting on April 23, 2019 at Bessie Branham Recreation Center.

Louis Grisoglio of MARTA offered an overview of the station rehabilitation that will begin this summer.  For each of the 38 MARTA stations, there will be wi-fi, restroom upgrades, improved signage and bicycle repair stations. Currently Vine City, North Avenue, and Peachtree Center are receiving elevator and escalator improvements.

MARTA is expanding retail in and around the stations.

“At [H.E.] Holmes we have a container village for small businesses,” Grisoglio said. “We’re working with the City of Atlanta to help businesses get started, and after they build up their business and get exposure they can move out into a storefront. We want to empower local businesses.”

In addition, there are now farmers markets one day a week at West End, College Park, Five Points, and H.E. Holmes stations.

Sugar Creek Basin runs parallel to I-20 from Edgewood until it crosses I-20 south of Fayetteville Road.  It then runs roughly parallel to Bouldercrest Drive until it empties into the South River on the other side of 285.

The rehabilitation project is intended to extend the life of the sewer system by at least 50 years.

Speaking of the cured-in-place liners that are being used in some sections, Little said, “The product has been around for 50 or 60 years, and the tests they’ve done lately say that it’s as good as the day it was put in. We used to say we know it will last for 50 years now we think it’ll last for 100. It’s hard to tell.”

Residents will receive notices if access to their property is required.

“We want to work with the residents before, during and after the process,” Lee said.

Beginning this month, the Department of Watershed Management will be offering monthly composting and rain barrel workshops. The $40 registration fee includes a rain barrel or compost bin to take home. People can sign up for the workshops by emailing Yolanda Bozeman at yobozeman@atlantaga.gov or calling 404-546-1262.

A community meeting hosted by the Department of City Planning to discuss a brownfield revolving loan for the Pullman Yard will be held at the Bessie Branham Recreation Center on May 9, 2019 at 6:30 pm.