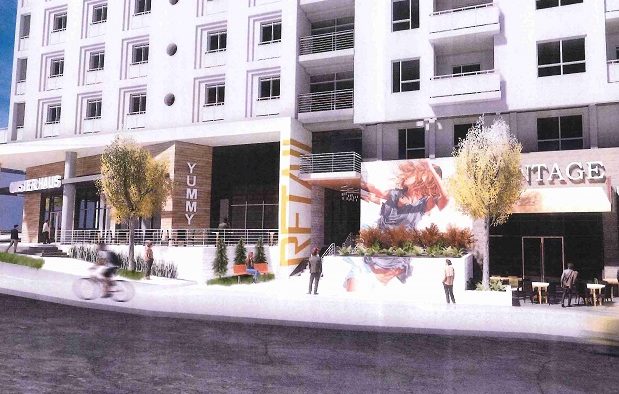 This is the portion of the design plan giving an example of how the developer plans to incorporate the telecommunications vault at the project site. Image obtained via the city of Decatur.
Share

At its regular meeting Tuesday night, the Decatur Planning Commission recommended that developer Mill Creek Residential be granted several exceptions to the city’s building standards to allow them to address physical challenges with the Bank of America site.

The project site is on northern side of the block bordered by Clairemont Avenue on the west, Church Street on the east and Commerce Drive to the north, the property where the Bank of America building and lot is now. The mixed-use project will have about 200 residential units with retail on the ground floor.

Harvey Wadsworth, Mill Creek’s Atlanta managing director for development told the commission the exceptions will ensure the mixed use complex’s street-level retail businesses are pedestrian-friendly and accessible, while still maintaining a pleasant buffer from traffic along busy Commerce and Church Streets and Clairemont Avenue

“Something that we have been really focusing on with this community is the development at the street level, which is kind of generating several of the special exceptions that we are asking for,” Wadsworth said.

The significant slope of the site and difference in grade between the side of the lot facing Clairemont and the side facing Commerce has been a challenge. To address this, Mill Creek has requested an exception that allows the front of the businesses, including restaurant patios, to be higher than two feet above the adjacent sidewalk in certain sections.

The alternative, said Wadsworth, would be to have a series of steps up and down every few feet around the exterior of the development. The exception allows them to keep the front of the businesses — which they hope will include many restaurants with outdoor dining — on a flat plane, with the sidewalk sloping up and down in front as needed.

The presence of a large, underground AT&T telecommunications vault underneath the existing sidewalk is another issue. It is mostly hidden now by a landscaping berm. But, once that is removed to accommodate the development, Wadsworth said, it would be exposed.

“It’s a concrete box, with a bunch of computer racks and data center equipment and cables inside,” he added. Since relocating it is not feasible, they want to enclose it in a decorative brick and put a planter and piece of public art on top.

“There would still be a hatch that would allow a worker to access the equipment the one or two times a year that they need to,” he said.

This would require an exception to the required width of the street landscape buffer in that spot to allow the sidewalk to be routed around the vault. The sidewalk would need to be narrower at that section, but still at least five feet wide to comply with ADA regulations.

The planned construction of the Commerce Drive cycle track would provide some additional buffer there between the sidewalk and car traffic.

“There is still the curb and then the bike path would have a curb,” he said.

Finally, the developers requested an exception allowing for all of the parking spaces to be 8.5 feet by 18 feet, instead of the 9 feet by 20 feet spaces required for residential and retail parking lots. The mixed-use development will be adjacent to the new Bank of America building, which is slated for development as an office building in the future, Wadsworth said.

The smaller parking spaces are allowed for office uses and the development would have some shared parking with the bank building.

During the public hearing regarding the exceptions, Decatur resident John Leake, 255 West Parkwood, objected to allowing the reduced parking space size and said he was concerned that the four entrances to the underground parking would cause traffic problems on the adjacent thoroughfares.

In response, Wadsworth clarified that two of the parking entrances would be on the alley between their development and Two Decatur Center and the Town Center parking deck.

“I guess our belief is that the more access points you have you disperse traffic and you don’t create bottlenecks and log jams and it’s better to have fewer cars going through more entrances, then that just a steady traffic flow through one,” he said.

Speaking on behalf of the Decatur Downtown Development Authority, which also reviewed the requested exceptions at its last meeting, Decatur Assistant City Manager Lyn Menne told the commission that the DDA has worked with Mill Creek for years to come up with a workable plan for the site, and that she believed that the options presented were in the best interest of the community.

“Our board has been involved in this site and this project for a long time and we did review various suggestions and options for the property,” Menne said. “It has been on our list of underdeveloped sites for three decades, because it is this basically suburban type bank on this corner and a large surface parking lot. Our board supports these exceptions which we think will help create a nice appearance and be a gateway into the downtown district.”

In a related matter, the commission also recognized the developer’s decision to not use the conditional use permit (CUP) it had previously been granted. The CUP consisted of a density bonus allowing construction of more apartment units than would ordinarily be allowed under the current zoning, provided the additional units be designated as affordable housing units.

As discussed at the DDA meeting, problems related to groundwater at the site prevented the construction of enough parking to support the additional density.

The Planning Commission’s recommendation now goes forward to the Decatur City Commission, which will need to give final approval for the exceptions to be allowed.