A little-noticed House Bill approved this Legislative session will get rid of the state’s Immigration Enforcement Review Board if Gov. Brian Kemp signs it.

The measure was tucked into House Bill 553, which ostensibly dealt with the State Victim Services Commission.

“It’s on the governor’s desk,” Dempsey told Decaturish. “It does dissolve the IERB.”

The provision flew so low under the radar that even one of the bill’s cosponsors, state Rep. Mary Margaret Oliver, D-Decatur, was not aware of it.

“I do not know, but will call Legislative Counsel Monday,” Oliver said when she was asked about the bill’s language concerning IERB.

Former IERB member Phil Kent was also unaware of the changes and didn’t notice them when a reporter first contacted him about it.

“What makes you think that?” he asked. 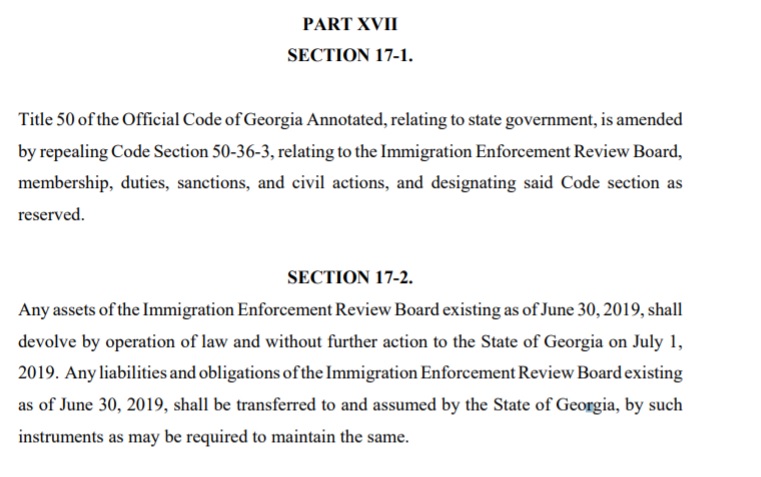 The board itself was not well known to the general public and functioned primarily as a way to handle complaints filed by The Dustin Inman Society, a hardline anti illegal-immigration group.

The Dustin Inman Society was one of the IERB’s most prominent critics. Group founder D.A. King was thrilled when he heard that the board could soon become extinct.

“If this is what it appears to be, somebody in leadership recognized the glaring need to abolish a very corrupt and efficient shield against enforcement of state laws aimed at protecting Georgians from the loss of jobs, benefits and services to the crime of illegal immigration,” King said. “While there were pro-enforcement board members, not all fit that description. Adios, IERB. Good riddance. The laws over which IERB had authority should now be enforced  — or not — like the rest of our state laws. Hooray!”

The board quickly fell under the spotlight when Lt. Gov. Casey Cagle attempted to boost his bid to become Georgia’s next governor by filing a complaint against the city of Decatur with the board. Cagle, who ultimately lost the Republican primary to Brian Kemp, accused the city of Decatur of being a Sanctuary City, harboring people suspected of being in the country illegally and refusing to cooperate with Immigration and Customs Enforcement.

The city said it does not detain immigrants without a valid warrant from ICE and never has. Decatur doesn’t have a jail. What the city did do was put a longstanding policy in writing regarding cooperation with Immigration and Customs Enforcement.

Cagle appointed members to the IERB and the board’s preliminary May 19 ruling was issued a few days before the Republican primary.

The city of Decatur fought back.

Decatur filed lawsuits challenging the board’s compliance with state transparency laws and questioning the legitimacy of board members who had overstayed their terms, prompting two members of the board — including Phil Kent — to resign.

The case, which had dragged on since November 2017, was quietly resolved on Jan. 8. The IERB settled both lawsuits filed by the city by agreeing to improve its compliance with state Open Records and Open Meetings laws. In exchange, Decatur removed a provision from its policy regarding ICE cooperation that said officers would face disciplinary action if they violated the policy. City Attorney Bryan Downs said that line was unnecessary because officers who violate any policy already are subject to disciplinary action.

The settlement also declares a May 19 preliminary ruling issued on Cagle’s behalf “null and void.”

The IERB agreed to pay the city $12,000 in attorney’s fees. The board definitively ruled that Decatur’s policy does not violate the state’s “Sanctuary Policy” statute.

Downs was not immediately available for comment regarding the potentially imminent dissolution of the IERB.

Mayor Patti Garrett said she didn’t know anything about the bill, referring questions to the bill’s sponsors.

The IERB was created in 2011. As of Monday, April 15, a press release announcing the board’s formation had been removed from the governor’s official website.