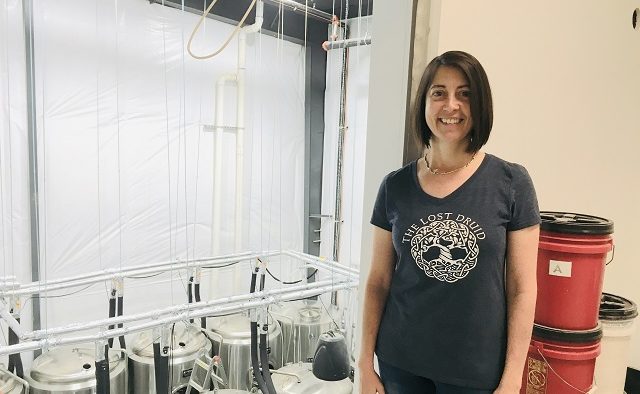 A new brewery, The Lost Druid at 2866 Washington Street in Avondale Estates, will preview its offerings during May Ham Fest on May 4 with a limited menu and four beers.

Owner Stacia Familo-Hopek and her husband brewer Rob Hopek are aiming for a full opening in mid-May. At that time, there will be 21 beers available, 12 from taps connected to tanks in the brewery and nine specialty kegs all of which will rotate frequently. The kitchen will provide mainly sandwiches, salads, and small plates.

“We are not a full brew-pub,” Rob Hopek said. “We are a production brewery.”

“We are very much a product of the change in the law,” Familo-Hopek said, referring to Senate Bill 85 passed in 2017 which allows breweries to sell food on site.

Familo-Hopek said that after a 20-year career as an organizational psychologist, “I needed to do something completely different to stretch myself, to grow, to challenge myself. So it just kind of came together.”

“What’s interesting is that women were the first brewers, way back when,” she said.  “Why that died out, I don’t know, but what I am excited about is seeing more and more women getting into the business and breaking through some of those barriers. The more that women choose to be involved, the more space there’s going to be for us.”

For Hopek, the brewery is a combination of his love for chemistry, botany, and beer. The name comes from a personal affinity for the ancient Druids and the importance of wood in his brewing process.

“We’ll be doing barrel-aging but I also do a lot with wood alternatives, whether it be spirals or honeycombs,” Hopek said. “It allows me to work with a lot of different wood varieties, not just oak.”

He added that there would not be a few constant flagship beers, but that varieties would rotate frequently, with the most popular returning based on customer demand.

The brewery will include solar panels on the roof and will be  welcoming to cyclists and pedestrians.

There are multiple bicycle racks and there will be pet-friendly outdoor seating in front and back.

Inside, multiple outlets make the bar a convenient place to sit with a laptop and a beer, making it writer friendly.

“What we want to create is an opportunity for people to just come and socialize with one another or if they want to sit quietly, they can do that as well,” Familo-Hopek said.  “Ultimately we want a comfortable environment where people can enjoy a selection of beer and find what they enjoy the most.”

An official opening date for the brewery was not available, but the owners hope to be up and running soon.