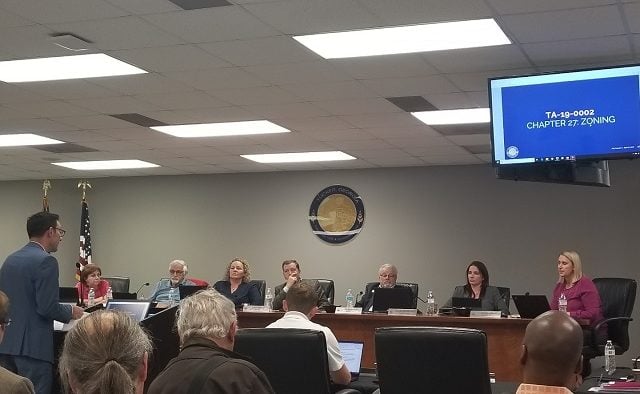 Tucker City Council listens to a presentation about updates to its sign ordinance at its meeting Monday night. Photo by Cathi Harris
Share

The city expects about $13 million in revenue and about the same in expenses, Tucker City Manager Tami Hanlin told council members. The projected amount of revenue assumes a city property tax millage rate of less than 1 percent and does not include the existing $4 million in reserve funds or the portion of the DeKalb Special Purpose Local Option Sales Tax (SPLOST) that the city expects to receive. Of the projected $13 million in revenue, about $8 million is budgeted for operating expenses with the remaining $5 million for capital projects.

“We are now seeing the full amount of revenue from all sources, and can project what we will have for the coming year,” Hanlin told Decaturish after the meeting. The city charter requires the city manager to submit a draft budget to the city council by March 31, with a final budget to be approved no later than April 29. The city council has held three public work sessions to develop the final budget presented to the council.

The new budget includes funds for four new staff positions: a city finance director to report directly to the city manager; a receptionist for the Tucker Recreation Center, and two part-time positions in the Parks and Recreation Department.

The budget also includes increases in the general operating expense line items for landscaping (from $361,200 this year to $560,700, due to the increased parks acreage); communications (from $114,800 to $278,780, due to an expansion in community events); and global information systems (GIS)/information technology(IT) — an increase from $643,933 to $828,367– to accommodate growth in the system and improved security.

Many of the Capital Fund projects are multi-year projects, Hanlin noted. Because the city adheres to a zero-based budgeting policy, the staff will ask for continuing approval on these projects each fiscal year.

– The council voted unanimously to approve a requested rezoning and concurrent lot-width variance for 4062 Comanche Drive. The rezoning allows the property owner to construct two single-family detached homes in place of the existing single home on the property.

– The council heard a first read of proposed changes to the city’s sign ordinance. The final ordinance will be discussed and voted on at the next meeting on May 13.

– Council members voted to defer the first and second readings of proposed changes to the downtown overlay district and official zoning map to the June 19 and June 26 meetings.

Information about the proposed changes to the sign ordinance and updates  to the downtown overlay district and the zoning map are available on the Plans and Studies page of the city website.