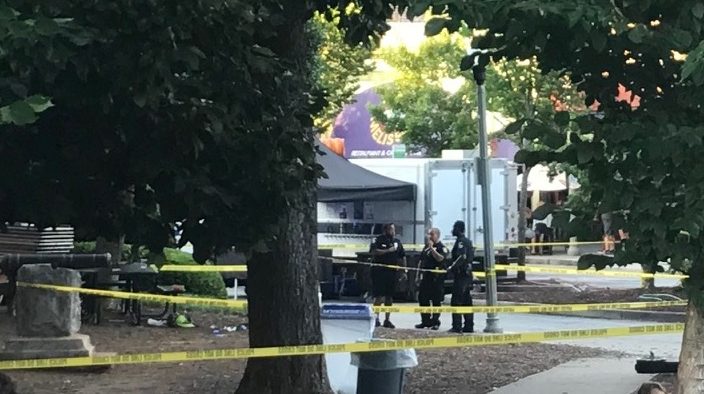 UPDATE: The suspect, Jerry Dean Johnson Jr., was indicted on charges of criminal attempt to commit a felony, aggravated assault, aggravate battery, and willful obstruction of law enforcement officers. The case against Johnson is pending. Here is our earlier story …

A witness and Decatur Police both confirmed an assault with a baseball bat occurred on the Decatur Square Saturday evening.

The victim, who was not identified, was transported to the hospital and is in critical condition.

A witness said the victim was being loaded into an ambulance around 7:30 p.m. Crime scene tape could be seen in a photo provided to Decaturish.

“On Saturday, May 25, 2019 at approximately 7:15 p.m., Decatur Police responded to the 100 block of East Court Square in reference to an injured male,” Police Lt. Jennifer Ross said. “Witnesses stated the injured male was struck in the head by a male suspect using a baseball bat and provided a detailed description of the suspect and his clothing and a direction of travel. Officers located the suspect in the 100 block of Clairemont Avenue and a foot chase ensued. The suspect, later identified as 43-year-old Jerry Dean Johnson Jr. of Arizona, was captured in a nearby parking deck without further incident. The suspect and victim are acquaintances, but the motive is unclear at this time.”

The incident happened at the end of the Decatur Arts Festival, which is taking place this weekend.

This story will be updated if more information becomes available.