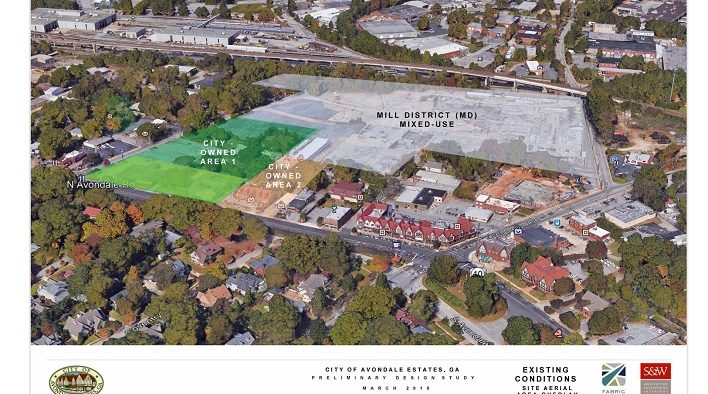 Avondale Estates plans to create a park along North Avondale Road and develop city-owned property adjacent to the park. Image obtained from the city of Avondale Estates.
Share

The Avondale Estates Mayor and Board of Commissioners held a work session Wednesday, May 15, 2019 which focused primarily on plans for redevelopment in the city.

Avondale Estates plans to create a park along North Avondale Road, and issued a Request for Qualification from firms interested in developing city-owned property adjacent to the park. The city received one response from Fabric Developers, LLC. The board plans to have a work session focused on that RFQ next Tuesday at 5:30 p.m. at City Hall.

– At the April work session meeting, the firm Davenport and Company recommended that Avondale Estates form an Urban Redevelopment Agency (URA). Teresa Finister of Murray Barnes Finister, a public finance law firm, gave a presentation to the board on what forming a URA would entail. According to Finister, the state of Georgia originally adopted the law which authorizes the formation of URAs in 1955 in order to deal with the issues of urban blight. In the last 10 years, a number of cities have used the law to facilitate downtown revitalization projects.

Powers granted to municipalities under the law can be exercised directly by the municipality or delegated to a URA. Those powers include appropriating funds, entering contracts, exercising eminent domain, zoning or rezoning, and acquiring or disposing of property within the predetermined limits of the urban redevelopment zone with fewer restrictions than normal. The process requires that the city designate specific blighted areas appropriate for redevelopment, form a detailed plan and hold public meetings before moving forward.

Finister described a URA as a “Powerful, flexible, and easy-to-use legislative tool for local governments” which allows cities to take a community-wide approach, issue tax-exempt bonds to pay for projects, and collaborate with other public entities and private enterprise more easily.

The Board of Mayor and Commissioners agreed to begin the first steps of forming a URA by placing discussion items on the agenda of future meetings.

– The board is considering regulation of short-term rentals based on what other municipalities have done and the recommendations of the Georgia House of Representatives Committee on Short-Term Rentals. Discussion will include whether to issue licenses, require insurance, tax rentals, regulate the amount of time a space can be rented and the number of times it can be rented, occupancy, and parking.

– At the regular meeting on Monday, May 20 the board will be voting on a resolution to create an Arboretum Board to manage the creation of an Avondale Estates Arboretum.

“This is a tree city.  I think this is a great idea and I want to thank you all for doing this,” said Avondale Estates Garden Club member Christi Granger.