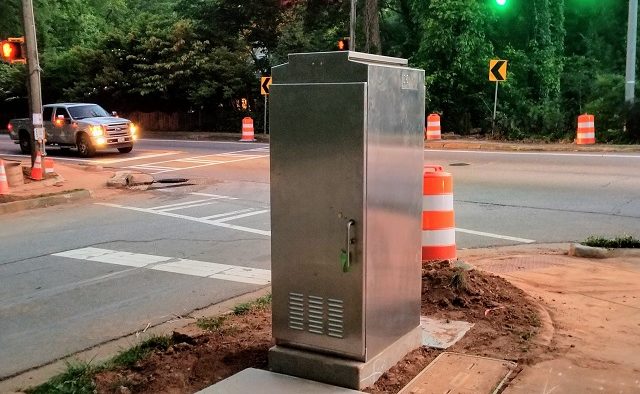 This is the view of the newly installed box. on Kirk Road. Photo by Cathi Harris
Share

One component of a long-awaited upgrade to the traffic light at Candler Street and Kirk Road is is prompting safety concerns from some nearby residents, as well as displeasure at the lack of input local citizens have into changes to state routes that run through the city.

Lucius Herrmann, who lives on South Candler Street, says the Georgia Department of Transportation’s (GDOT) decision to move the traffic signal box from its old location along the southwest side of Candler to a spot on the northeast corner of Candler and Kirk Road blocks the sight line of cars waiting at the intersection and endangers pedestrians and cyclists who need to cross either street.

“The planned location of the box clearly blocked some of the view for motorists waiting at the traffic light on Kirk Road,” says Herrmann. “It also blocks part of the view of pedestrians crossing from north to south on Kirk Road.”

Herrmann notes that old location of the signal box on the southwest side of Candler was across the street from the intersection and out of sight of both pedestrians and drivers.

“That location on the west side of the road has worked well for over 30 years,” Herrmann says. “This is a busy intersection. It’s part of a designated Safe Routes to School. I can understand that there are reasons that make moving the box easier and more convenient [for them], but is that worth making the intersection more unsafe?”

Installation of a new signal box – which houses the electrical components controlling the traffic and pedestrian walk signals – is part of a larger project to improve safety at the intersection and has been in the works for almost a decade, says Assistant City Manager David Junger.

The new traffic lights will be mounted on large metal mast arms and be more visible to cars. There are also new pedestrian signal lights covering the north-south crosswalk on Kirk Road and the crosswalk across Candler Street on the south side of the intersection. The new signal will include a leading pedestrian interval, which gives people time to enter the crosswalk before the cars on the opposite side are given a green light. This helps prevent accidents when drivers make right or left turns across the crosswalk.

Herrmann says he first became aware of the plans last spring when the state contacted he and his wife to acquire part of their front yard to have room to put the pole for the pedestrian signal lights. He was told at the time the project was slated to begin around 2020. When he saw a traffic engineer with the state at the intersection this past April, he asked to see a copy of the plans. He was surprised to learn they planned to move the signal box across the street, and spent the next several weeks calling and emailing representatives with the District 7 GDOT office in Chamblee, as well as state and city elected officials.

“I wanted to know what the procedure was for getting something like this changed,” he said. “There was no notice that there was going to be this kind of change, no meetings or communication of any kind.”

In his communication with GDOT traffic engineers working on the signal upgrade, they have indicated that old signal box was not properly located on the public right-of-way and replacing it with the newer larger box would require the agency to acquire more land. Further, moving the signal box to the north side places it closer to the power supply needed to support it, as well as allows more room for technicians to access and maintain the equipment.

Herrmann says these limitations could be addressed with a small amount of effort on the state’s part and would have been worth it to maintain safety for the residents who walk and bike in the area.

Junger says he understands Herrmann’s objections, but that the city has no authority over the design of traffic signals on Candler Street/Candler Road because it is a state route under GDOT’s control.

He has been out to the intersection to study the issue and says he feels sure that the state’s plan does not compromise pedestrian safety. The intersection is a T-intersection, with no dedicated left turn lane and only two crosswalks — one from north to south across Kirk Road and one across Candler Road on the south side of the intersection, Junger explained.

“I think people can agree to disagree on whether this is the best design for the intersection, but if I truly felt that this posed a safety hazard, I would be fighting this a lot harder,” he said.

The larger issue, Junger said, is that city of Decatur residents are used to having a good deal of input into streetscape changes the city makes, but are often surprised when they don’t have the same input when it comes to state roads within city limits. Candler Street (which becomes Candler Road south of Pharr Road) is Georgia Route 155, a state highway. As such, GDOT has ultimate authority over the design and construction of traffic controls all along it. The same is true of College Avenue (U.S. Highway 278), Scott Boulevard (U.S. 78) and Clairmont Road/Clairemont Avenue (U.S. 23).

The engineers in GDOT District 7 do regularly meet with city staff to discuss current projects within the city limits, and he has encouraged them to let the city know in advance they are about to start construction in order to get the word out to Decatur residents.

“This particular project has been planned for a long time — at least eight or 10 years,” Junger told Decaturish. “But GDOT doesn’t necessarily tell us the schedule. Things can sit for a long time and then they get the funding lined up and [the project] comes off the shelf.”

Junger says he himself did not know work on the Kirk Road light was about to start until he saw the construction barrels at the corner.

At that point, he acknowledged, it would be hard to get GDOT to consider a change of course because they have hired contractors and already have the design work done.

For projects the city controls, they typically try to communicate early and often with residents, sharing design plans and soliciting feedback. The state does not usually work that way, he adds. In the course of their regular meetings, Junger says he hopes that he can get GDOT to work with them to communicate information to local residents so that there aren’t as many surprises.

“They do meet with us regularly. I am not sure they meet with representatives of the other municipalities in this district as often as they do with us,” he says. “We do communicate. But, in terms of doing things with public involvement, I think we are a bit ahead of them on that. Hopefully, in the future, we can convince them to do things more our way.”