Flicks With Nicki – The Graduate

Flicks With Nicki – The Graduate 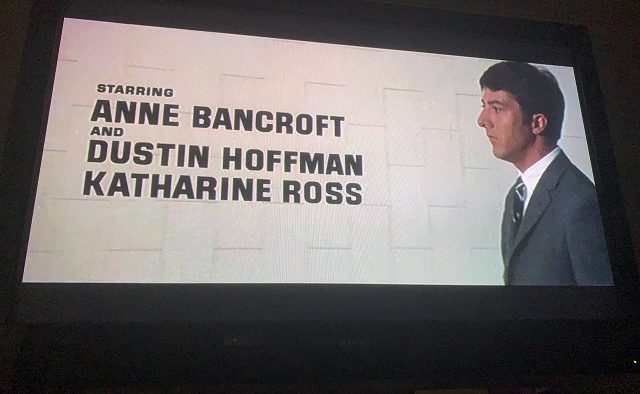 I first saw “The Graduate” as a senior in college. Stanford brought mainstream movies to campus all year in a program called “Flicks.” The culminating event was always the 1967 film “The Graduate” starring Anne Bancroft and Dustin Hoffman. Tradition dictated that graduating seniors wear their caps and gowns to the showing. I did.

I knew it was a quintessential American coming-of-age story. I’d studied “Catcher in the Rye” and “A Separate Peace.” I’d seen the movie “Dead Poet’s Society.” I knew enough about American (white male prep school) coming-of-age stories to know that “coming of age” happens late and with hesitancy, panic, and malaise.

The story starts with Benjamin Braddock (Dustin Hoffman) on a plane. From the first moments of the film, we see his inertia. He stands on the moving sidewalk as people, the whole world, pass him by. He has graduated from an unnamed East Coast college to return to his parents’ beautiful home and life in California. At a party in his honor, Benjamin encounters Mrs. Robinson (Anne Bancroft), a family friend who insists that he drive her home. Their affair starts. The summer goes on with restless unease, and the situation is complicated when her daughter Elaine (Katharine Ross) returns home. The turning point happens when Benjamin is forced to take out the younger Ms. Robinson.

My coming-of-age panic wasn’t lackadaisical, but urgent. I had to find a job. I had to consider graduate school. I remember studying for both the MCAT and GRE, because I wasn’t sure what I wanted to do, but I knew I had to do something. School or work. Romance was not a consideration. There was no backyard pool waiting for me in Stone Mountain, Georgia. There was no luxury Italian sports car. I didn’t need an Alfa Romeo Spider, when my trusty 11-year-old Honda Accord waited for me.

I have a niece graduating from high school and another niece graduating from college this month. They are not likely to see themselves in Benjamin Braddock. Maybe Elaine is the one I should have identified with all those years ago, but I didn’t. I decided to return to this movie to see if it felt different. I have lived a little. I have a better understanding of panic and malaise and hesitancy. So, I watched it again. This time without my cap and gown.

This time I am Mrs. Robinson’s age.

The first name that appears on the screen is Anne Bancroft. It’s not something I noticed all those years ago. During the party scene at the beginning of the movie, the adults swarm, congratulate, and kiss Ben. The camera stays close to his face so we see his eyes shifting. Mrs. Robinson is the only person who notices Ben’s unhappiness. We spot her on the arm of a sofa. Her whole body is in the frame. She is some kind of creature. She is both comfort and discomfort.

I love her. She is a tangle of arms and legs and wayward hair. The other women in the film have motionless hairstyles. Mrs. Robinson moves. She smokes, she drinks, she dares, she demands, she undresses. I felt protective of her.

Mrs. Robinson is doomed to become the villain. I’ve studied my fair share of the “mad woman in the attic stories.” From Mr. Rochester’s wife in “Jane Eyre” to “Fatal Attraction,” Hollywood loves to show that beguiling women will one day be dangerous. While Mrs. Robinson isn’t locked away, there are certainly many ways that she is trapped by her marriage, her gender, society and motherhood.

Benjamin isn’t happy with the emotional distance Mrs. Robinson demands. She doesn’t want to talk. Let’s be real. She’s just there for the sex. They don’t like each other. They have no chemistry. They are in a relationship of desperation and convenience. In a film of angst and repression, the most haunting scene is Benjamin demanding that Mrs. Robinson have a conversation with him.

Benjamin: We are going to have a conversation. Think of another topic.

Mrs. Robinson: How about art.

Benjamin: Art. That’s a good subject. You start it off.

Mrs. Robinson: You start it off. I don’t know anything about it.

Benjamin: Yes, I do. I know quite a bit about it.

Mrs. Robinson: Go ahead then.

Benjamin: Art. Well what do you want to know about it. Are you interested more in modern art or more in classical art?

Benjamin: Then why do you want to talk about it?

They move on to discuss her marriage and husband. The conversation returns to this:

Benjamin: Was he a law student at the time?

Benjamin: And you were a student also.

Benjamin: What was your major?

Mrs. Robinson: Why are you asking me all this?

Benjamin: Because I’m interested, Mrs. Robinson. Now what was your major subject at college?

Benjamin: But I thought you . . . I guess you kind of lost interest in it over the years then.

If my first viewing of the film was all about Benjamin, my second was all about Mrs. Robinson. Her beauty, rage, and stoic despair.

The movie takes some predictable turns. Not because the movie was predictable, but by now there are hundreds of rip-offs of this story. Ben’s stalkerish behavior is dismissed as love. Elaine is caught between two men. A frat boy med student versus the ever-lazy Ben. Of course, she will choose Ben, the best and final act of rebellion. But he must chase her down to stop the wedding. The great irony is that he arrives too late. Elaine is already married, but they still run away in the iconic final scene.

“The Graduate” earned Mike Nichols an Academy Award for Best Director. He used purposeful camera angles and limited dialogue. We are gifted with awkward glances and images of being underwater. Drowning. Fish tank. It is a movie without heroes. If there is one, it is Mrs. Robinson.

Though Ben is the center of the story, Mrs. Robinson is the one who takes action. She is a woman with no first name. She is mad at the world. At her life. She makes me think of other terrible portrayals of women like her. Daenerys Targaryen. She is in a world where her only freedom was her body and her rage. Eventually the world will betray her. My heart ached for Mrs. Robinson.

Enjoy the beautiful and familiar soundtrack from Simon & Garfunkel. It’s a movie that allows us to reflect on our lives and all the moments of hesitation and panic. Strangely, young Dustin Hoffman looks a lot like Tom Cruise. Anne Bancroft is elegance on the screen. She embodies what we have to lose and gain through our choices. Grade B-. Because I still hate Benjamin Braddock. He is dumb.