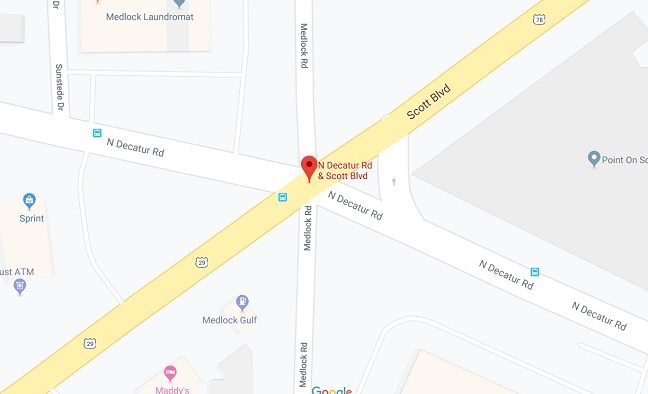 Editor’s note: GDOT has provided conflicting information about this project. While GDOT said late Sunday that the entire intersection would be closed, a spokesperson clarified early Monday morning that the project will actually consist of short intermittent single lane closures and that traffic disruptions will be minimal. Now GDOT says the project has been cancelled. Please read this entire story for the most up to date information and please read this editor’s note that provides more information about how this story was reported.

Shortly before midnight on Sunday, May 19, the Georgia Department of Transportation confirmed a project that will affect travel for people who routinely traverse Scott Boulevard.

On Monday morning, following inquiries from Decaturish, GDOT said that project was cancelled.

GDOT initially said the intersection of Scott Boulevard and North Decatur Road will be closed starting Monday, May 20, through Thursday, May 23, from 5 a.m. to 3 p.m. Crews were supposed to be installing traffic signal loops this week. Traffic signal loops are sensors in the road that detect when a car is waiting at the light. The loops aid in signal timing.

On Monday morning, GDOT further clarified that this will not be an all-lanes closed project and that any disruptions should be small.

“There will be short intermittent single lane closures following repaving to repair the signal loops,” the spokesperson for GDOT said. “It should have minimal impact and work at each location is swift.”

Then, a few hours later, the Transportation Department said the project was cancelled.

“I do apologize for the inconvenience but we send out numerous traffic interruption reports a day,” the spokesperson said. “Rarely are they wrong. Occasionally an accident or miscommunication it going to happen when you consider the sheer volume of notifications we send out and the variable nature of construction projects.”

The GDOT spokesperson said they would provide updated information about the intermittent lane closures as soon as it is available.

There was almost no advance notice of the now-cancelled project and GDOT didn’t send out a press advisory until they were contacted by Decaturish. The only news about the project before the official press release was on the Georgia 511 website, which notifies the public about upcoming road projects. The DeKalb County Police Department and the Decatur Police Department didn’t know about it either.

The spokesperson said the lack of communication was a mistake.

“There was a miscommunication between our traffic operations team and the individual who entered [it] in the system,” the spokesperson said. “We are still sorting it out.”