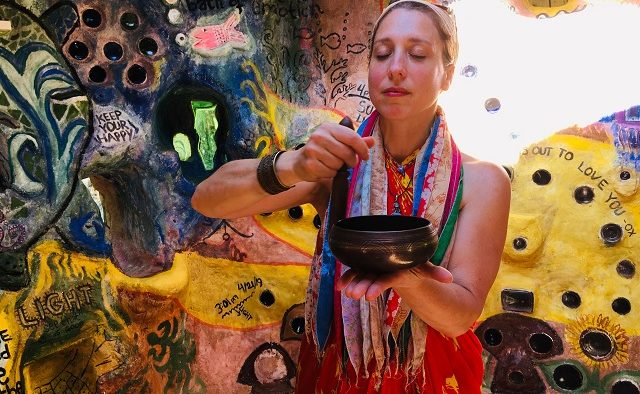 Aviva Vuvuzela is a musician, and she also built the cob playhouse at the Wylde Center. Photo by Sara Amis.
Share

The future of green building may be in your neighborhood community garden.

Aviva Vuvuzela of Mud Builders of Atlanta, the Georgia Hemp Economic Revival Organization, and local band Aviva and the Flying Penguins, originally built a cob construction playhouse for the Wylde Center location in Oakhurst in 2007. The building, named OX, is a colorful structure with built-in benches and child-sized niches.

OX was damaged but not destroyed when two trees fell on it after a storm. While repairing the playhouse ahead of the Wylde Center’s garden tour May 4 and 5, Vuvuzela saw an opportunity to revisit the techniques used in its construction and preview Hemp History Week coming up June 3-9.

“Being an environmental education organization focused on reduce, reuse, recycle, natural elements, all of those things, this is all of that,” Wassum said. “Natural elements were used. It’s not built out of plastic. The little touches that [Aviva] added are found items or re-used items, so there’s glass bottles, trinkets, things like that. All the details down to the paint and the sealer are natural elements, which for an organization like this is an amazing fit.

“The Wylde Center is an environmental education non-profit.  We do a number of things but primarily focus on educating the public of all ages about the value of green spaces, the environment, nutrition, food, anything in that realm, and we have five green spaces in Decatur and this side of Atlanta.”

In the repairs, Vuvuzela sought to demonstrate the usefulness of hemp hurd, a by-product of hemp fiber production, as a building material. Hemp hurd may be used in “hempcrete,” a bio-composite made with a lime-based binder, or in cob construction.

Cob is a form of earthen construction that has been used world-wide for millennia.

“The basic recipe [for cob] always is clay, sand and straw, and we used wheat straw,” Vuvuzela says of her early efforts, which included the Wylde Center playhouse.  “It was like my PhD project. I was learning as I went. I went to earthen building school as well, during the process.

Structures are built by mixing clay, sand, and straw and forming lumpy “cobs” which are stacked while still wet. Walls are finished with an earthen or lime plaster, also mixed with straw.

According to Vuvuzela, “I noticed that when I added a little hemp hurd [to the cob] it was better. The lime plaster I also think is better with the hemp hurd and I think it’s prettier.”

Vuvuzela used cob, lime plaster, and hempcrete in the repairs on OX.

Cob is fire-proof and extremely sturdy. Vuvuzela pointed to where the tree damage used to be on the Wylde Center playhouse.

“This just slid down, so I salvaged part of it and caulked it back in and then built up around it.  Nothing was destroyed on [the other] side. Two huge trees! Strong as an OX,” she said.

She also raised the height of the walls all around, and a new roof was added by Joe Little, also a member of Mud Builders of Atlanta.

Other recent projects include another playhouse at East Lake Commons, but no dwellings because of code restrictions that Vuvuzela says need to be changed.  She has already discussed state-level restrictions with legislators.

“I wanted to build a passive solar house,” she said. “I consulted with an architect and he said we couldn’t do it because you have to have mold-proofing plastic around all the buildings. There’s no point in doing that with a cob building. It has to breathe.”

Lime plaster and hemp-crete are mold resistant, and Vuvuzela is optimistic.

Vuvuzela said, “I wrote the song ‘Cannabis Car’ twenty years ago. We were touring around and everyone was like, ‘Hemp will never be legal’ and we were like ‘Just sing the song! Imagine it!’”

She credits her drummer with encouraging her to do activism beyond music.

“I just got full on into it,” Vuvuzela said.

Hemp has come a long way in Georgia.

“HB 213 [the Georgia Hemp Farming Act] passed both the House and the Senate.  As far as I know Governor Kemp has not signed it yet, but he plans to,” Vuvuzela said.

Industrial hemp can be used to make a wide variety of products including paper, cloth, oil, and food. Hemp hurd, the by-product used to repair OX the playhouse, can also be used to make plastic and fiberglass alternatives.

Vuvuzela hopes that OX will continue to be a play and storytelling space for many years to come.