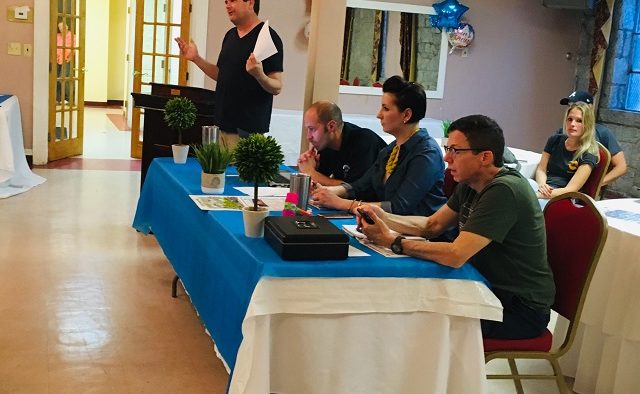 The future of Imagine Memorial, the city of Atlanta’s budget, and the city’s trees, along with preparations for Kirkwood’s annual Spring Fling, were all discussed at the Kirkwood Neighbors’ Organization May 10 meeting.

Recently Imagine Memorial announced it was winding down and that Greg Giuffrida, the Memorial Corridor Executive, was leaving the job to pursue other opportunities. A post on the project’s website, Memorialdriveatl.com, said the project lacks enough financial support to make it happen.

“The long-term goal was always to spin this role into a new Community Improvement District,” the post on Memorialdriveatl.com says. “Unfortunately, we don’t have the support of key commercial property owners to do so at this time. The current fundraising model is not sustainable. Some donors have been incredibly generous and patient, while other stakeholders who benefit from the work haven’t contributed. An enormous amount of work remains for the Corridor to reach its full potential as the best urban street in Atlanta. The need for a permanent organization to advocate for limited public resources to be spent on Memorial Drive will only grow. It’s possible that a new coalition will form to continue this work in the future.”

The corridor has seen some improvements during Imagine Memorial’s four year history, most notably the current restriping and resurfacing four miles of Memorial Drive from Reynoldstown to East Lake.

Archibong said the work on the corridor will continue.

“We appreciate all that Greg Giuffrida brought to the table, we appreciate that he is standing by for the transition, but we are continuing,” Archibong said. “The good news is, we have never had a Community Improvement District on this side of town, and we are that close to getting it. One of the players who is critical to that, and who is at the table now talking in a meaningful way, is Jeff Fuqua. So we might even have Fuqua Development in play which is important for the CID to be effective.”

“We are wanting to make sure that our budget reflects the priorities of the citizens, so please share with me any concerns,” Archibong said. A new participatory budget pilot program will be implemented in Atlanta City Council districts 2 and 11. It will allow the public to weigh in on how a portion of the budget is spent in each district.”

The city of Atlanta will be re-writing its tree ordinance.

An Atlanta City Council work session on the topic will be held June 9.

“Hopefully we will be able to come up with legislation that will protect the trees and is sensitive to the sometimes competing needs of development versus conservation and come up with a better way to move forward,” Archibong said.

Andrew Feury made a call for volunteers for Spring Fling, coming up May 18.

“If we don’t have volunteers working in the beer tent, we can’t sell beer, something I know is probably near and dear to all of you,” said Feury.

Volunteers will get a special edition t-shirt designed by R. Land and a beer ticket. To learn more about volunteering opportunities, click here.

The 4th Annual Kirkwood Bird Stroll will be Sunday May 19 from 8-10 am and will begin in the parking lot of the Kirkwood Public Library.