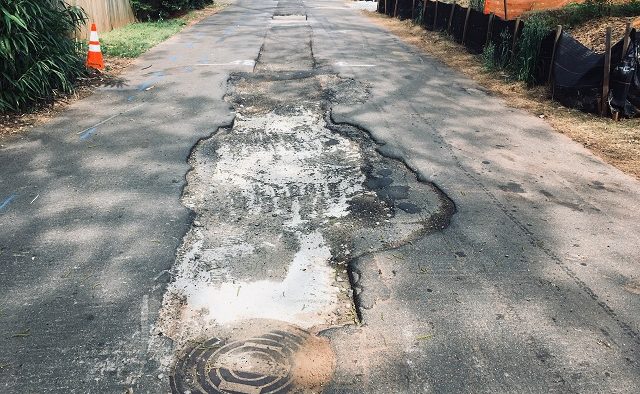 Update: According to Stan Sugarman, as of June 25, the road has been fixed. Here is our earlier story …

A trench-shaped pothole in the middle of Dunwoody Street in Kirkwood is the subject of a lengthy disagreement among the city of Atlanta, SSD Construction, and Spencer Love Homes.

Dunwoody Street was resurfaced in 2018.  Spencer Love Homes is in the process of building on three lots at the corner of Dunwoody Street and Kirkwood Road.  SSD Construction was hired to do the contract work on sewer connections for the three lots in the fall of 2018, which included a bonded permit to work in the right of way.

After the work was completed the street above the sewer line started collapsing, prompting the city to make emergency repairs to the surface of the road in January.

According to Stan Sugarman, Chair of the Kirkwood Neighborhood Organization, SSD Construction and Spencer Love Homes are in a payment dispute and so far neither party has reimbursed the city or repaired the original work.

“Both the City of Atlanta and Spencer Love Homes should be held responsible for not returning the road to its original condition months ago,” Sugarman said. “By allowing the situation to worsen the developer is creating a public hazard that could injure a resident or visitor to Kirkwood.”

According to Atlanta City Councilwoman Natalyn Archibong, the city of Atlanta has issued a citation to SSD Construction and the company has had two municipal court appearances.

“It is my understanding the next appearance is scheduled for June, as the result of a request for an extension made by SSD, to allow it, the general contractor and Spencer Love Homes to work together to restore the street to minimum city standards,” said Archibong.

Meanwhile, the city repaired the surface of the road again last week in order to improve safety ahead of Kirkwood Spring Fling on May 18.  If the street is not properly restored by the June hearing date, Archibong stated that the city can make a claim against the bond that SSD posted for the original permit.

Attempts to reach Spencer Love Homes and SSD Construction for comment were unsuccessful.