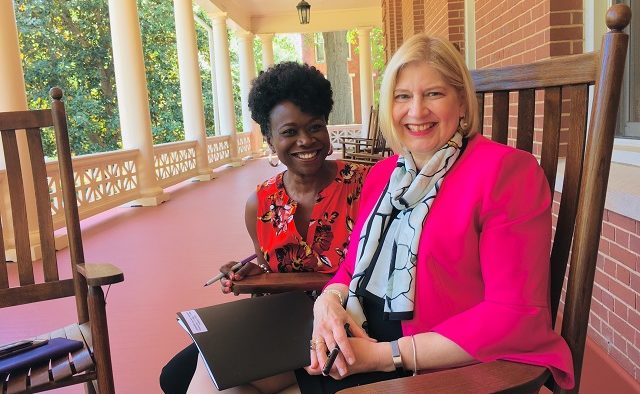 Agnes Scott College, with its wide porches, magnolia trees and history as a quintessential Southern women’s college, has taken a new direction in the last few years as a training ground for future leaders.

Meanwhile, Leocadia I. “Lee” Zak’s career — which has been focused on law and economic development — has taken a new turn: college administration.

Choosing a former director of the US Trade and Development Agency with relatively little experience in higher education to run a small liberal arts college might seem unusual on the surface.

Zak’s friend and former colleague the Honorable Paul Wilson described Agnes Scott’s decision to hire her to be their ninth college president as a “bold move.”

Agnes Scott’s Summit program has garnered national attention. U.S. News and World Report ranked Agnes Scott number one among liberal arts colleges on its Most Innovative Colleges list. The Chronicle of Higher Education hailed the program as a promising response to a changing and difficult landscape for traditional liberal arts.

The program begins with “strength assessments” and extensive preparation for a study abroad journey for every student. It continues after the first year with a focus either on leadership or global learning, with a team of advisors every step of the way.  Seniors graduate with a self-created digital portfolio, intended both to teach digital literacy and to be useful in job searches.

In that context, Zak’s history as a leader with experience in local economic development and international trade as well as teaching law starts to make sense.

“The fact that Agnes Scott’s Summit experience focuses on women’s leadership and also on global learning are two things that absolutely spoke to me when I was looking for my next adventure,” Zak said.

Next week, Agnes Scott will graduate the first cohort of seniors to complete the entire Summit program. The effect of the program is intended to go beyond the obvious educational goals.

“At this point every single student has had a first-year experience of going abroad. It’s a unifying force on campus,” Zak said.

Both the global learning and leadership pieces of the Summit program lead to global thinking, local engagement, and more practical application than the old liberal arts stereotypes.

Faculty are encouraged to think “beyond academia to the wider world,” Zak said, while students are encouraged to engage with the community through volunteer work, study, and using the skills they have learned in the classroom.

Human trafficking is a topic the Agnes Scott community has read about, hosted conferences on, and done volunteer work around. That depth of knowledge led rising senior Tatiana Nigh to write an op-ed for the Atlanta Journal-Constitution last January, arguing that focus on the Superbowl drew attention away from the year-round problem of human trafficking that passes unnoticed in the community.

President Zak sees the relationship between Agnes Scott and the local community as mutually supportive and beneficial. She points out that public health is currently the most popular major at Agnes Scott, and students find ample opportunities for internships locally both at the Centers for Disease Control and the Task Force for Global Health.

Agnes Scott partners with the Global Village Project, a school for refugee girls who have had their education interrupted. Students from Global Village eat lunch on the Agnes Scott campus, interacting with students and getting a glimpse of college life.

Agnes Scott also brings national attention and resources to Decatur. Google, Inc. has selected Agnes Scott as one of three “Google Campuses” this summer where Google faculty along with Agnes Scott faculty will offer a 10 week course similar to what Google offers to new hires.

“We will be bringing students from across the country to Decatur to participate,” Zak said.

Zak sees the innovations of Summit as an extension of Agnes Scott tradition.

“Agnes Scott has always been a place for trailblazers,” Zak said.

She also sees the campus culture of civility as a model to be carried beyond the quad, praising students’ ability to conduct contentious discussions with respect.

“I see that as a model for all of us, and really believe that they are going to be a model beyond this campus in the future,” Zak said. “I have so much hope for the future, because I see [our students] and I see what they are able to do.”