At its meeting Tuesday, the Decatur Planning Commission recommended approval of the construction of a six-unit “stacked flat” residential development on the empty lot at 417 E. College Avenue, between the Plants, LLC building and a maintenance facility owned by Agnes Scott College at the corner of College Avenue and Avery Street.

The commission also recommended the city grant the developer’s request to waive the requirement for the inclusion of a commercial tenant on the building’s ground floor.

Brian Dalle with J.D. Signature Homes told commissioners that the narrow width of the lot, and the limitations of the building size, would make it unlikely that a commercial business would be successful at that location. A business would also add more traffic to that area than just the six homes.

“The width [of the lot] is only 44 feet, and with the allowance of space for fire-rescue to have access onto the property, and that the property is subject to an easement from the Agnes Scott building so they can move their equipment in and out, we only have room for about a 20-foot driveway,” Dalle said. “And we can only build so deep on the lot. It does not leave much room for a business there.” 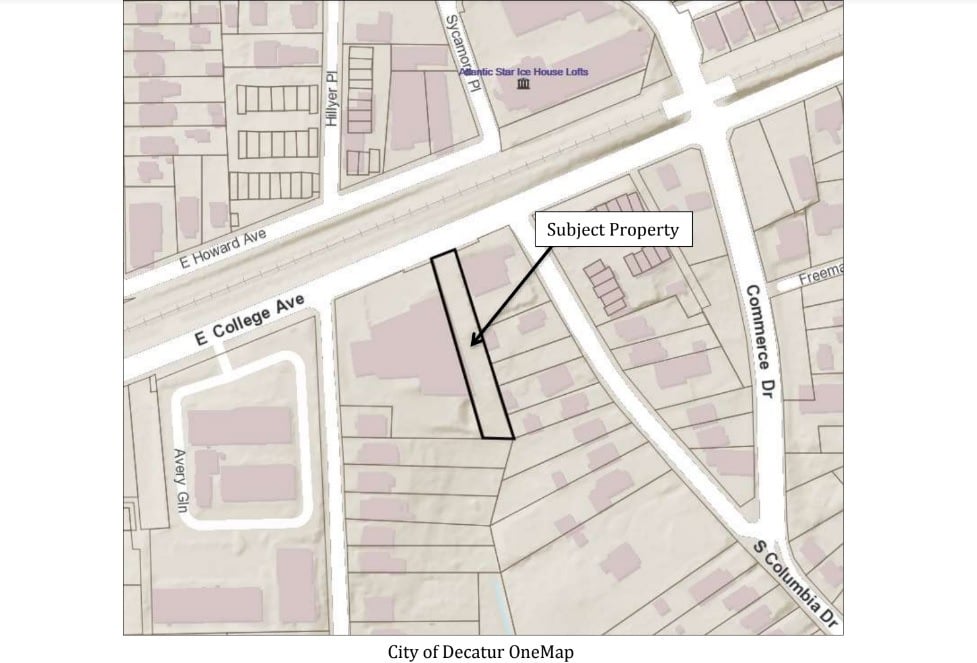 The location of the development. Photo obtained via the city of Decatur

A Google street view image of the location of the development.

A stacked flat is a single building divided horizontally into different units, instead of vertically, ground to roof, like traditional townhouses. Dalle clarified that this building would be “like a Chicago-style walkup.”

Some Winnona Park residents present at the meeting said they were unaware of the site development plans prior to seeing the public meeting notice, and objected to approval of a multi-story residential building between two one-story commercial buildings along the busy street.

Seegar Swanson, who lives on Winnona Drive and is also vice-chair of the Decatur Zoning Board of Appeals spoke in opposition to the approval of the require conditional use permit (CUP).

At its April meeting, the ZBA voted to grant a variance for street frontage along East College, with the understanding that — other than that variance — the development would be able to meet the city zoning requirements without needing further exceptions, Swanson said. Information in the ZBA’s staff report did not indicate that a CUP or exception to the requirement for first-floor commercial space would also be needed.

“Because our information was that it met the other zoning requirements, we felt we had to vote to approve it,” Swanson said. “But in our discussion, I think the general feeling was that we did not feel that a solely residential development was the best use of this property.”

City Planning Director Angela Threadgill clarified that multi-family residential developments are permitted in the city’s C-1 commercial districts provided they obtain the CUP from the city. The fact that the development is residential is not inconsistent with the zoning, but does require further limitations on the property’s land use.

In deciding whether to recommend the CUP, the commission must evaluate the application according to set criteria, including determining that the housing would have no adverse impact on surrounding properties, nor contributing a significant traffic burden, she said. Further, they would need to decide whether to recommend that the developer still be required to have space for a commercial tenant on the ground floor despite the site’s limitations.

Speaking during discussion, Planning Commissioner Scott Doyon said that the current character of College Avenue in Decatur is already a mix of small commercial, multifamily residential,  and institutional uses.

“Speaking for a second as a 23-year resident of College Avenue, the character of College is already a sporadic hodgepodge of commercial, some residential, then institutional and back to commercial in no predictable order,” he said. “That is part of it’s charm.”

The current condition of that lot is not “part of this charm’ given that it is vacant, overgrown and used by passers-by as a receptacle for trash and pet waste, he added.

Planning Commission member Mike Travis pointed out that the commission must make recommendations based on their evaluation of whether applicants met specific criteria in the city’s development ordinance and not whether they personally liked or disliked specific projects.

“I mean, quite frankly, I don’t like it. I think that you have kind of shoehorned a lot of stuff into a small package here,” Travis said. “But, it seems to me that it meets all of the stated criteria except for the inclusion of the storefront at ground level.”

Planning Commission member Rachel Cogburn also said she would have liked to have seen more communication with surrounding property owners before seeking approval from the city.

Defending his development, Dalle said that it was his understanding that other developers have considered building other projects on the lot, but were unable to make it work.

“As a developer, you know, I would like to build out all 350-feet of the [depth of] the property,” Dalle said. “But I know there are issues with stormwater runoff, I know that I need to mitigate the impact to neighbors. We are leaving 180 feet untouched on the rear of the property, to have that sort of buffer. I think that this is a better alternative than, say, one [commercial] building with a full parking lot.”

After the commission voted to recommend the CUP with the requested exception, Planning Commission Chair Harold Buckley advised members of the public that, if they still had concerns, there was still time to learn more about the planned development before the project comes up for a final vote by the City Commission.

“This is not your last opportunity to weigh in on this because we are a recommending body only as it relates to this application,” Buckley said. “The next stop from here is the City Commission, they will make the final decision.”

Initial drawings and details about the development are available in the Planning Commission meeting packet for the May 14 meeting, which is posted on the city’s website here.