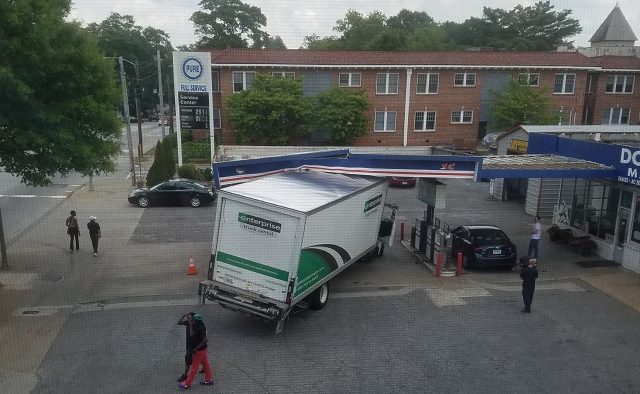 People won’t be able to fill up at the Decatur Pure Station for a little while following a crash that occurred on Friday, May 17.

Barrett Tibbetts, part owner of the gas station, said a rental truck delivering appliances entered the gas station’s parking lot on East Ponce de Leon Avenue with the intention of turning around. Instead, the driver ran into the awning over the gas pumps.

“He came off the street, coming in a good 15 to 20 miles an hour and he was just trying to turn around and he just clobbered it,” Tibbetts said. “He hit It so hard, there’s a hole in the roof of the canopy and it’s detached a little bit away. The truck was wedged in there, so the police came. … They shut down the whole street just in case the thing would’ve fallen. It was an exciting Friday afternoon.”

Tibbetts said the station is working “as quickly as possible” to get everything repaired and to reopen the gas pumps.

“Meanwhile our car repair, emissions, and detail department are operating as normal,” he said.