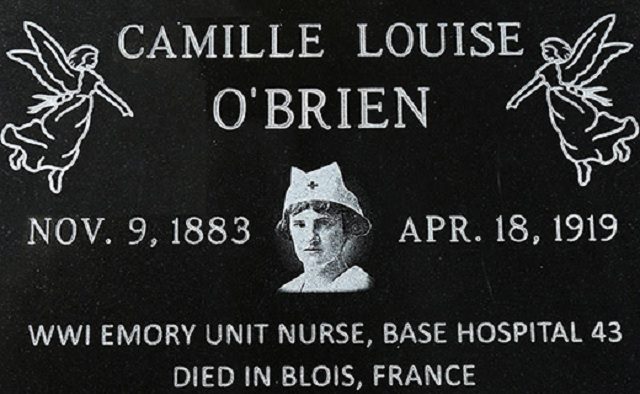 A remembrance ceremony for the life of former Emory nurse, Camille O’Brien, was held at the Greenwood Cemetery in Atlanta on April 18, 2019, the 100th anniversary of her death.

After World War I ended in 1918, most of the Emory Unit moved back to the U.S. while O’Brien and some others decided to stay to take care of soldiers in France. In April 1919, O’Brien came down with spinal meningitis and died.

O’Brien was “the only member of the Emory Unit to die in France during World War I,” according to a recent press release.

After O’Brien’s death, the military held a funeral for her and buried her in France with soldiers. In 1921, O’Brien’s body was sent back to Georgia and buried in the Greenwood Cemetery.

However, several of her relatives that are alive today didn’t know that she was buried in Atlanta. After a ceremony in 1921, her family decided not to put a headstone at her grave, leading her living family members believing that she was still buried in France along with soldiers.

“We wanted to organize a graveside memorial to honor and remember Camille as being a hero to so many soldiers who were injured and sick,” historian and organizer of the ceremony, Michael Hitt said in a recent press release. “She was left in an unmarked grave, so we are here to finish what was left undone. This ceremony gives her current family the opportunity to say a proper goodbye, while marking her grave with a special headstone.”

Today, there is also a brass tablet in honor of O’Brien on display at Emory University Hospital.