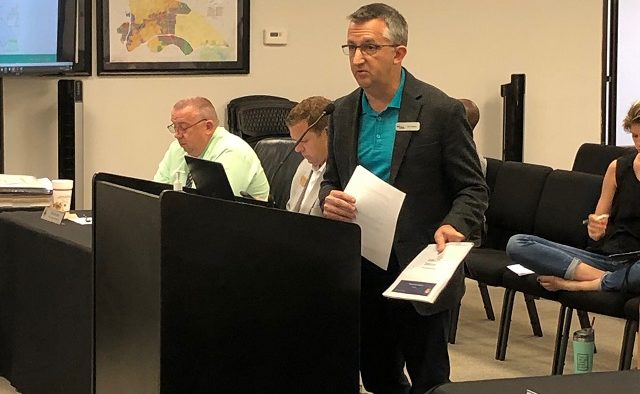 The Tucker City Council has given the green light to a host of pedestrian safety improvements in the lead-up to adopting its first transportation master plan, comprising around $200 million in projects through 2040.

At its regular meeting on May 28, the Tucker City Council unanimously approved a $162,710 contract of immediate pedestrian safety improvements, awarded to Lilburn-based firm Construction 57.

It means existing signage and markings at half a dozen pedestrian crossings will be refreshed, and new signs and flashing beacons installed.

The pedestrian safety improvements were recommended by design firm VHB as part of its work to draft Tucker’s Strategic Transportation Master Plan (STMP).

VHB was instructed by the city to analyze all mid-block crossings in Tucker, and the resulting recommended work attracted three contract bids – the cheapest being Construction 57’s.

Tucker budgeted $200,000 for pedestrian safety improvements in 2019, of which $31,925 was spent on VHB’s analysis and recommendations, leaving just enough for the recommended work to be completed.

Ken Hildebrandt, the city’s engineer, told the 30-plus people at the meeting that some other pedestrian safety projects were already underway in Tucker, and the additional planned work would be done well before the end of the year.

“I’ve asked the contractor to prioritize the work outside the three schools so we can get that finished this summer, but we should have all of them done by the fall,” he said.

The pedestrian safety improvements will form part of the city’s strategic transportation master plan, due for final approval and adoption in coming weeks.

As the master plan is to become an amendment of the city’s Comprehensive Plan, in order to attract federal funding, it must go through a more rigorous approval process, including oversight by the Tucker Community Council and two public hearings at regular city council meetings.

“Initially, we were going to request adoption of the plan this evening, as we feel like we have a near final product,” Hildebrandt said May 28. “The reason we want this to be an amendment to the Comprehensive Plan is when we pursue federal funding we want to be able to show that all these projects are embedded and have been through the public process and have the support of the mayor and council.”

The transportation master plan outlines $199 million in projects through 2040, including new sidewalks, streets, intersection improvements, bicycle infrastructure, maintenance, road widening, and better public transport options to fit in with current master transportation and transit plans being implemented by DeKalb County and the Georgia Department of Transportation.

The Tucker transportation master plan sets out the existing state of transportation infrastructure and issues within Tucker, and how to best deal with the needs of motorists, cyclists, and pedestrians during the next two decades.

Public feedback, including a big push for better walkability through the city, helped shape the plan over the last year.

VHB estimates the city will be able to utilize at least $28 million in county tax revenue as well as $49 million of state and federal funding for the planned projects, and invest $18 million from its own general fund based on current budget allocations.

Tucker is set to receive $31.7 million of DeKalb County’s special purpose local option sales tax (SPLOST) through 2024, and would get a population-based portion of any future DeKalb SPLOST if that were to be approved by voters.

Tim Preece, of VHB, told the meeting that potential future SPLOST revenue was the “greatest unknown” in regards to whether Tucker’s transportation plan could be fully realized.

“If we in DeKalb County have no additional sales tax, Tucker will be able to keep up with maintenance and not build a whole lot else, but if the county extends that sales tax in the future, Tucker can afford to implement the whole plan over the next 20 years,” Preece said.

Short-term roadway improvements in the plan include fixing or adding turn lanes and fixing curbs on Brockett, Fellowship, and Idlewood roads.

The widening of Mountain Industrial Boulevard and Cooledge Road to increase traffic capacity is also planned in the mid-term, as north-south traffic through Tucker is expected to increase the most in future.

City officials said the draft transportation master plan will be uploaded this week on Tucker’s website for public viewing.

In other business, the Tucker City Council:

– Amended its alcohol licensing policy to include caterers, bring interest charges in line with state law, and provide better guidelines for code compliance.

– Awarded three contracts totaling $420,677 to construction firm F. H. Paschen to replace fencing around the city’s parks and renovate the kitchen and restrooms of the Tucker Recreation Center on Lavista Road.

– Approved a Special Land Use Permit for Audrey DeWitt to operate a massage business within an office building at 1505 Lilburn Stone Mountain Road, near the Hugh Howell Road intersection. Conditions include 9 a.m. to 9 p.m. operating hours.

– Approved a Special Land Use Permit for Megan Thomas to operate a small child daycare business from her home at 1940 Idlewood Road. Conditions include 6 a.m. to 7 p.m. operating hours hours, a ban on signage, and the fencing of Thomas’ outdoor play area. One Tucker resident lodged a submission opposing the business, citing traffic congestion, while eight submissions were received in support, mostly from Thomas’ clients.