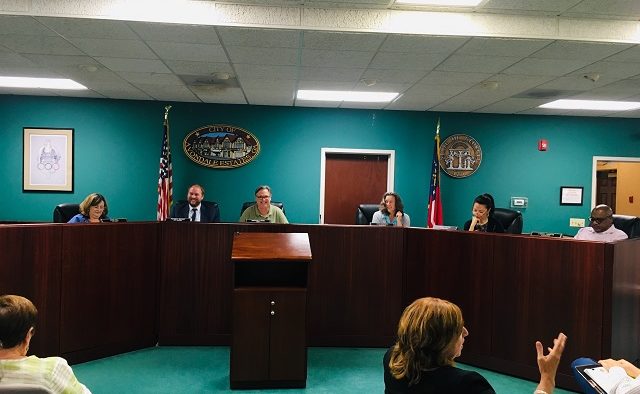 The commission voted unanimously to approve creation of the URA.

The BMOC also held the first of three public hearings on the millage rate, a number used to calculate property taxes

The city has proposed a millage rate of 9.8 mills for 2019, which matches the millage rate for 2018.  This will result in an estimated 3.4 percent tax increase for Avondale Estates residents.  The second and third public hearings will be Thursday June 20 and Monday July 1.  The commission will vote on the millage rate immediately following the third hearing.

Liz Goodstein was among those calling for the millage rate to be lowered, saying, “Our assessments are going up considerably, so plenty of money is coming in. Our taxes are going up. The millage rate for the city is already very substantial, and I’m having a lot of conversations with people who are worried about losing their homes.”

Goodstein stated that lowering the millage rate would allow people with limited income to stay in the community.

Candace Jones said, “I have a little bit of a different perspective. We have a lot infrastructure needs today and for the next 20 or 30 years. So, my opinion is that we need to maintain the current millage rate at 9.8, but we do need to take the pressure off for the senior citizens.”

She suggested that tax breaks be targeted based on age and income.

Public comments on the storm water redevelopment projects and the proposed Urban Redevelopment Agency focused on cost, concerns about the city borrowing money and some of the language in the statute authorizing the formation of a URA. In order to form the URA, the area to be developed must be defined as “blighted,” per Georgia law.

George Kennedy stated that he was very much in favor of the storm water project, but objected to the possible unforeseen consequences.

“I was surprised to wake up day before yesterday to find out that I lived in a pocket of blight,” Kennedy said. “That can’t have a good effect on our property values.”

Bryant said, “It will not materially affect your property values. In fact, as the projects are completed, it will increase property values, rather than depress them.”

Kennedy and others expressed concern that state law allows URAs to hold power of eminent domain.

Both Bryant and Teresa Finister of Murray Barnes Finister clarified that in this case the power of eminent domain will not be granted to the URA, but reserved to the city.

The URA will be authorized to oversee the three storm water projects and the proposed park project on North Avondale road.  Several speakers expressed concerns about the city borrowing money to finance those projects. Paul Dorrah suggested separating the financing of the park from the storm water projects.

Former mayor Ed Reiker among others suggested using the storm water fund to pay for the storm water projects, rather than borrowing money. Commissioner Lisa Shortell described it as an emergency fund, to be used for unforeseen immediate needs rather than planned projects.

The commission voted unanimously to amend the downtown improvement master plan to specifically include development of five-acres of city owned property on North Avondale Road ((four owned by the city, one owned by its Development Authority), reconfiguring of Laredo Drive, and the three storm water projects, and to establish an urban redevelopment area.

The commission voted unanimously to establish an Urban Redevelopment Agency. The initial members are the mayor and commissioners. By-laws will be established by the members at public meetings.

“We’ve been talking about this for a long time. We hired some people to help us figure it out, and this is their recommendation,” Mayor Jonathan Elmore said.

Larratte earlier in the meeting that he was skeptical, but decided to vote for the project after studying it.

“I was the most skeptical about this,” he said. “I will be voting for it today, comfortable that the benefits outweigh the risks.”

The commission voted unanimously to authorize the city manager to hire Bleakly Advisory Group to assist in negotiations with developers related to the proposed park project.

The commission also unanimously approved a resolution which stated that the city was generally in agreement with the process used and specific goals of the DeKalb County Transit Master Plan and requests that cities have a formal role in determining project priorities. The city additionally requests that an oversight board be formed and that cities in DeKalb have representation on it.

Also, the commission voted unanimously to allow the city manager to conduct a classification and compensation study for all full-time city positions, to be carried out by the Carl Vinson Institute for a fee of $18,000.  The study will evaluate existing positions and recommend new job descriptions and compensation schedules for those positions.

“We do know that some positions are undercompensated, and we are experiencing a high level of turnover because of that, especially in Public Works,” said Bryant.  “We have had a handful of employees leave for the same job with higher compensation in neighboring cities.”

The evaluation will be completed in January 2020.