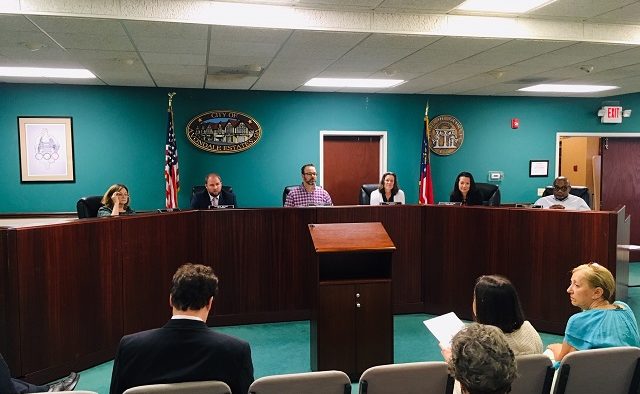 The Avondale Estates Board of Mayor and Commissioners are preparing to take the next steps toward securing a bond anticipation note in order to fund three storm water projects along with a proposed park on North Avondale Road.

At the work session on Thursday, June 20, the board discussed engaging Murray Barnes Finister LLP to assist in creating the Urban Redevelopment Agency that the board approved at its last special called meeting on June 13. Finister would also assist with the legal documentation necessary to issue a bond anticipation note or BAN. The fee for Finister’s services to the city would be $65,000.

The board also discussed engaging Davenport & Company, who advised the city previously to issue the BAN. Davenport would prepare a financing schedule including public hearings and other requirements, issue a Request for Proposals to financial institutions, offer an analysis of proposals in order to assist in selecting the winning proposal, and assist in the closing process. The fee for Davenport’s services would be $40,000.

The BAN would create a line of credit that the city could borrow against as needed for the proposed projects, with a recommended upper limit of $8.4 million. Board members and staff emphasized that the city need not borrow the entire amount, but would only borrow what was necessary to complete the projects.

“Each time the board decides to borrow against the credit limit on that note, it will be a specific amount associated with a specific project,” said City Manager Patrick Bryant.

Bryant stated that issuance of the BAN begins the period during which the city can borrow money against the line of credit at “recommended and necessary times.” It does not immediately incur debt. Bryant also stated that, “the BAN can only be used to fund projects within the Urban Redevelopment Plans that were approved by the board.”

Following up on another previously discussed topic, the Board of Mayor and Commissioners discussed several options to revise the fee schedule for sanitation services.

“Commercial properties were receiving a higher level of service, meaning frequency and volume, than residential properties, which means that residents were subsidizing sanitation services for businesses,” said Bryant.

City staff recommended  that regular commercial properties pay 2 ½ times the residential rate, commensurate with the service they receive. The regular commercial rate would rise to $1212, while the residential rate would drop to $485. A surplus of $5,000 at the end of the year would be used to buy bins for commercial properties, allowing them to be charged according to the services they use more accurately.

Commissioner Adela Yelton pointed out that for most residents, the reduction in sanitation fees would offset the increase in property taxes.

Public comment on the second hearing for the proposed millage rate repeated last week’s calls for exemptions for seniors and those with limited incomes.

Resident Melissa O’Sheilds stated, “I’m one of the ones who would have to move. I will have to sell my house. There’s no way I can stay if it goes up any more. I’m at my limit now.”

The regular meeting of the board will be rescheduled from June 24 to July 1 in order to achieve quorum. The decision to engage Murray Barnes Finister LLP and Davenport and Company, the revised sanitation fees, and the millage rate will be voted on at the special called meeting on July 1.