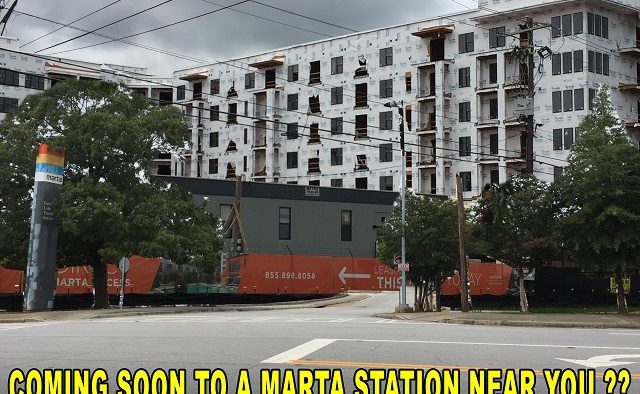 MARTA is attempting to monetize their assets by developing the land surrounding their stations. While this is an understandable cash grab, the size and scale of these projects will have significant negative impacts on the surrounding  residential neighborhoods by building over 400 4-5 story apartments. The area surrounding the station, on both sides of the city line dividing Kirkwood  and Oakhurst has been an established, quiet, neighborhood of single family homes for almost 100 years.

The Atlanta Regional Commission and MARTA are proposing a development that would add an additional 4 percent – 5 percent of the total population of Decatur, in a tiny area. It is telling that MARTA, Decatur and Atlanta feel that they can push this project with impunity onto an area that lies at the very edge of the boundary between the two cities. If they tried building this kind of dense development in any other neighborhood outside Decatur’s core, they would face certain backlash from the neighbors who would be most impacted by it.

There has not been Decatur census since 2010, and we have no idea what the true population of the city is. We can all agree, though, the city population has grown at an exponential rate over the last 10 years. We think it would be wise to hold off on any proposed development until the completion of the 2020 census, when we will have a clearer idea of what the population is and how many more people an apartment complex like this will add to the total. The city of Decatur and the Decatur school system grossly underestimated the number of children in the school system. For instance, according to neighbors and Decatur City School officials The ⅘ Academy:

– Had modular classrooms AGAIN in 2014

– Is adding a second ⅘ Academy opening next year, albeit with 3rd graders, too

A massive development like this will take its toll on existing water and sewage systems. Traffic in the corridor, already quite problematic, will become untenable with at least 800 more residents dropped into this small area on the edge Decatur. MARTA and Decatur assure us this will not be a problem because people in the apartments will be incentivized to use the MARTA system. This is unrealistic. People tend not to use the train because of its limited reach. And, again, residents of the city consistently complain about the over-taxed school system. Consider how many more students this multi-family complex will be adding to the city’s academic system. The Decatur High School population has nearly doubled in less than 10 years

Decatur is using the wedge issue of the promise of a maximum of 20 percent affordable housing to help drive this project forward. While we all are for affordable housing, creating this kind of dense construction in order to pay for it is not the answer. If you are concerned about this kind of unfettered large-scale development that seems so widespread in our city in these times, contact your city, county and state representatives. Let them know that you would like to see MARTA, Decatur and Atlanta reach a solution with the residents who live near the East Lake Station that respects the long term scale and livability of our neighborhood, as well as taking into account MARTA’s financial needs.

We have a much better idea.

Imagine a small village, comprised of entirely tiny-homes, small condos, nice apartments and studios.  All of the units would be “affordable housing.”

Sustainability, solar power, rain-water capture and lots of trees could be part of the plan.

City employees would be able to afford  to live in the City they work in.

Very small families, where no unit will be more than two bedrooms, will have a great start. This obviously will limit the number of students, but will still add a lot of students to the system.

Seniors will still be able to afford Decatur, along with artists and entrepreneurs.

There could be a community pool and field, a nice general store (along the lines of Ace-meets-Oakhurst Market) and shared gardens and open spaces.  A nice cafe/sandwich shop and one or two specialty shops could round out the village.

Decatur is likely the only city Georgia that could realize such a project…if it’s not only about making money, of course.

Simple math tells us this plan absolutely can work: a vibrant, sustainable, eco-friendly, low-impact, affordable village that the existing surrounding residents can support.

We hope you support it, too.