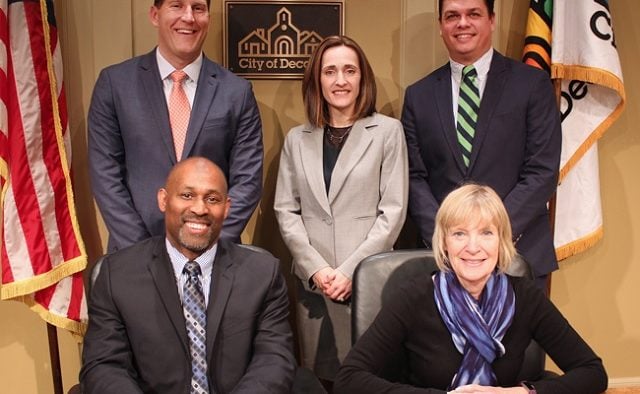 UPDATE: The City Commission at its June 17 meeting approved the agenda items discussed in this article. Here is our earlier story …

The Decatur City Commission at its regular meeting on June 17 will consider approving the city’s budget and an all-way stop to make things safer around the new Talley Street School, opening this fall.

City commissioners will meet June 17 at City Hall, located at 509 North McDonough Street. The meeting starts with a 6:30 p.m. work session followed by a regular meeting at 7:30 p.m. All meetings are open to the public.

The $28.7 million Fiscal Year 19-20 budget is a 9 percent increase over the current budget. It includes a millage rate increase of .3 mills to pay for the debt incurred to buy Legacy Park. Under the proposed tax increase, a home worth $500,000 would pay an additional $64. The increase is expected to generate about $1.5 million to make the payments on the Legacy Park debt.

The city will take $2.3 million out of its reserves, also called a fund balance, to cover expenses, including $1 million for “unanticipated” storm water system repair.

“In addition to the storm water repair, other one-time expenditures funded by the use of fund balance include the 2020 Strategic Plan, an impact fee study, the historic resources survey, a cybersecurity incident response plan and computer equipment,” the proposed budget says.

The budget document also notes that revenues from a Special Purpose Local Option Sales Tax intended to pay for city projects and pay off debt are coming in lower than expected.

“Initial revenue projections of SPLOST proceeds were estimated at $20,530,000 over six years,” the budget document says. “Based on current receipts, the total may be closer to $18,900,000. This will only cover outstanding debt service and the Atlanta Avenue intersection project. If there are funds remaining after those obligations are met, that revenue will be spent on improvements that benefit pedestrians and bicyclists.”

The city will spend $500,000 more on health insurance for its employees this year and has updated its budget to guarantee full-time employees a “living wage,” recommending a 5 percent increase in pay ranges.

“While this does not alter individual pay for current employees, it does provide higher entry level wages for new employees,” the budget says. “More importantly, the new pay scale gets the city closer to offering a ‘living wage’ to all full-­time employees. … While a living wage is normally higher than minimum wage or a poverty wage, it does not take into consideration income that would be needed for eating out, leisure activities and savings. The wage varies based on geography and family composition. In DeKalb County, the living wage for a family of two working adults with two children is $15.59 per hour. The salary recommendation included in this budget establishes the lowest hourly wage for a full-­time City employee at $14.81. The cost of the pay scale adjustment is estimated to be close to $25,500.”

Here is a summary of revenues and expenses. 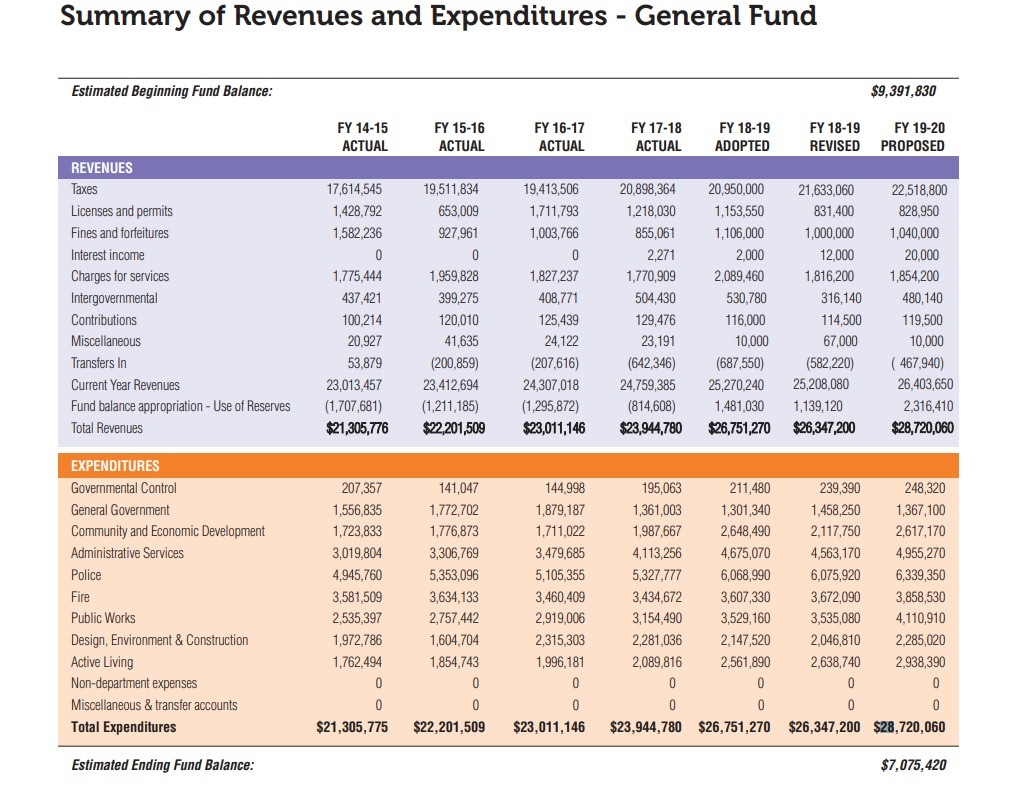 In addition to the budget, commissioners will consider a temporary all-way stop at Talley Street and South Columbia Drive to improve safety for the new Talley Street school, which opens this fall, a memo attached to the meeting agenda says.

“The all-way stop condition will be established as soon as possible, giving drivers ample notice of the new traffic pattern prior to Aug. 1, the first day of school,” the memo says. “The temporary all-way stop will remain as the traffic control device until completion of the new South Columbia/Talley Street signal system. Shadowmoor Drive will remain as a side street stop-controlled intersection until the new signal system is installed.”

Also, commissioners will follow up on a Planning Commission recommendation to allow Park 108, LLC, the developer converting the old AT&T building at the corner of East Lake Drive and Park Place to condominiums, to revise its plans for the project. The developer has decided against adding a new story to the top of the building as originally planned.