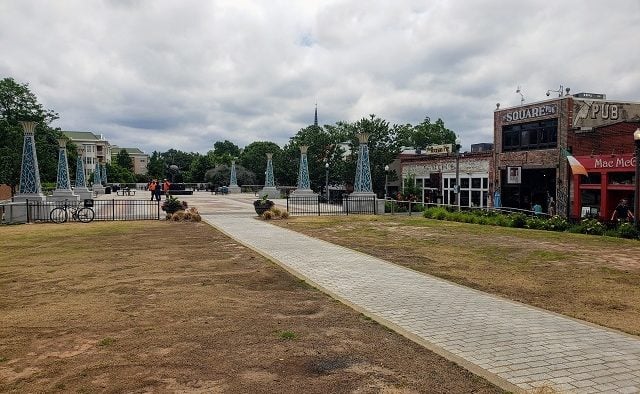 Decatur’s Downtown Development Authority has decided to hold off on a pilot program that would place pairs of downtown ambassadors on patrol around the square and help mediate conflicts between people who are homeless and local business employees and customers.

“We have gone back to the drawing board on that,” Shirley Baylis, Downtown Program Manager, told the DDA board at its regular meeting on Friday. “The police [department] expressed some safety concerns to us because of some things that they have encountered themselves.”

The DDA board had previously approved $20,500 to fund a five-month pilot program that would place two-person teams of ambassadors on the square during certain peak hours. The ambassador positions would have been part time, but the city wanted to recruit people who had prior emergency medical or first responder training, like retired police officers or those with experience in mental health treatment.

The police department offered to put a team of officers on the square during the times that they had planned for the pilot program and they have done so, Bayliss said. Their increased presence has had a noticeable effect.

The city is still working with the Atlanta Dream Center to offer services and outreach to people in the downtown area experiencing homelessness.

“We are kind of changing up some things in terms of what they are doing, so there is still that compassionate piece that we are working on, as well,” Baylis said.

DDA Board Chair Chris Sciarrone expressed concern that the increased police presence did not address getting people who are homeless access to services in the area that they might need.

“But part of it is directing people to services,” Sciarrone said. “Part of the police department’s strategy is that they have a problem here. But, the people that are the problem have problems of their own and they need assistance. They can be directed to local resources.”

The team of officers have pamphlets with information about local services like food and housing assistance and they can call the Dream Center for help finding services.

“The Dream Center has told them, ‘You have our number, you can call us and we can come or you can give it to someone who wants to get help,” Baylis said.