Flicks With Nicki – ‘The Last Black Man in San Francisco’

Flicks With Nicki – ‘The Last Black Man in San Francisco’ 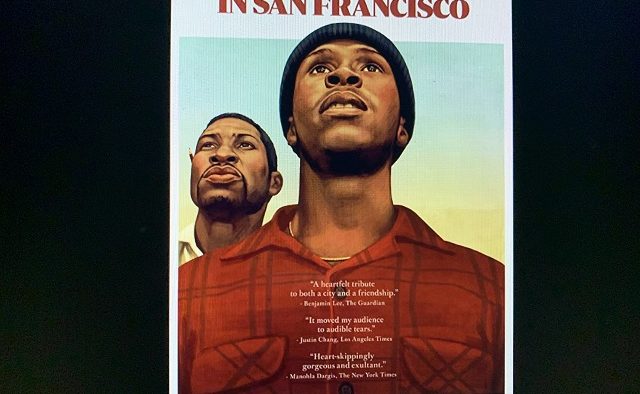 Jimmie (Jimmie Fails) and his best friend Montgomery “Mont” (Jonathan Majors) watch over a Victorian home in the Fillmore district of San Francisco that is occupied by a white couple. Jimmie’s grandfather built the home in 1940’s San Francisco when the Japanese residents were forced into in internment camps. The home was eventually lost from the family, but not Jimmie’s heart.

Each day the two friends must navigate their own neighborhood of Bayview-Hunters Point where we see a preacher standing on a milk crate and a little girl skipping by workers in hazmat suits. A group of men loiter and ridicule Jimmie and Mont in front of the house where they live with Mont’s blind grandfather (Danny Glover).

Without traditional villains and heroes, I watched each scene unfold feeling worried, but also loving the innocent wonder the two leads bring to the story. They are wary of the real estate agents, start-up tech dudes shouting from a trolley, family members who have abandoned them, and complaining ladies on the bus who long for Los Angeles. They are wary, but not jaded. We think the villains might be the men loitering in front of Monty’s house, but we are wrong. The villains are the ones who poisoned the bay and let the poorest and most vulnerable live in the toxic waste. The villain, though shown through fog and wildfire smoke and dirty streets, is never San Francisco.

This is not a movie for scenic views of the Golden Gate Bridge or Coit Tower or Fisherman’s Wharf. We never once see the Palace of Fine Arts. That isn’t Jimmie’s world. It’s the living and breathing person’s San Francisco. Only a few miles separate the people who sleep on the floor from the people who live in multi million-dollar houses.

The men on the corner who taunt Mont and Jimmie are the Greek chorus of American expectations for Black men in America. Two friends are the antithesis of those expectations. They share a skateboard and glide through the city. Their brotherhood is perfect and true. They are willing to extend that friendship even to those who might not deserve it. They persevere. They dream when life tells them they aren’t worthy of those dreams.

The heroes of the film are the steep streets and aunties and skateboards and a naked man at the bus stop. The hero is the man who sleeps in his car decorated like a house on the inside. The heroes are various ways the grieving loiterers begin to look closer at the world around them.

They are boys from the hood, but not of the hood.

The film is slow. We wander through the dream of the story as sad secrets are revealed. There are shouts of joy and anger. There are long gazes from the characters that just miss the center of the camera lens. There are tears of pain, grief, and exhaustion. Mont wants to write a play. Jimmie wants a home through family or house or city, and cannot find it.

I like about half of the features from A24, the independent film company known for movies like “Ex Machina” (2014), “Moonlight” (2016), and “The Florida Project” (2017). “The Last Black Man in San Francisco” is a good addition to their portfolio. The film won Best Director at Sundance for Joe Talbot. The story was inspired by the real experiences and friendship between Joe Talbot and Jimmie Fails (who plays a dramatized version of himself with the same name).

I figured it was going to be a harsh and poignant story. But it wasn’t harsh. It played almost like a lullaby. I wanted to get an unfiltered view of a city I briefly knew and shaped me into the person I’ve become. In the end, I felt hopeful and sad. I felt terribly sad for all the kinds of people who are forgotten in every city and every small town. I felt hopeful at the true and strange depiction of friendship that transcends. I am still thinking of the final image of the film. If you’ve ever been on the waters bay, you know that the waves are strong. You know that the water is almost as important as the city. The more I think about this movie, the more I love it.

Every tale of colonialism and gentrification and capitalism should be this eloquent. Grade A-