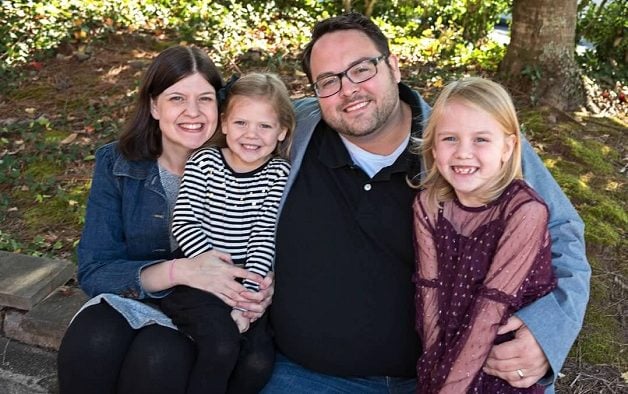 James Herndon sat in the audience during a Jan. 15 Decatur School Board meeting when board member Garrett Goebel announced he wouldn’t seek reelection.

“Two teachers I’m friends with said I should run for this spot,” Herndon said.

Goebel represents District 1, Post B on the School Board.

If elected as a School Board member, the teachers would have Herndon’s ear. He knows from experience how hard their job can be. Herndon currently works as Director of the Barkley Forum for Debate, Deliberation, and Dialogue at Emory University. Before that, he taught English at Chattahoochee High School in Fulton County. According to his campaign website, he holds a Master of Arts degree in Communication with a focus on Qualitative Studies and Education Studies from the University of Alabama. James is also a graduate of Mercer University in Macon.

He’s been a Decatur resident since 2008. He is married to Mandi Herndon and they have two daughters: Mackenzie, a rising 3rd grader at the new Talley Street Upper Elementary School and Charlotte, who will attend College Heights. He’s been involved with education in Decatur, serving as chair on the Glennwood Elementary School Leadership Team, the steering committee for the Talley Street School, the System Charter Leadership Team and the School District Boundary Committee.

In a recent interview with Decaturish, Herndon kept returning to the one group he feels isn’t being heard.

“Teachers need a voice in politics, period,” he said.

So what do teachers need from City Schools of Decatur that they aren’t getting now?

“More than anything, they need an avenue to hear their grievances big and small,” Herndon said. “I think Decatur is great at listening to parents.”

Teachers, not so much.

He said teachers need to be paid more and the school system should recognize that the high expectations of the parents here can put extra stress on teachers in CSD.

“It’s important to know people have your back,” he said.

Herndon pointed to a recent controversy in Decatur as an example. The school system asked parents to take a survey about whether they would agree to extra days off from school or early dismissals to give teachers more time to prepare for their time in the classroom.

The survey was presented as a response to requests from teachers.

An email to parents about the survey says, in part, “staff often request to have additional [professional learning] opportunities throughout the year.” Some of the changes that CSD asked families in the community to consider included implementing a monthly day with no students, a half-day every other week, weekly two-hour early or late dismissal and adding nine days to the teachers’ contracts.

Many parents felt blindsided by the survey, which was not preceded by the public discussion that surrounds other contentious issues in CSD, like school redistricting. After Decaturish first published the story, an anonymous comment submitted on behalf of CSD teachers disputed the school system’s reasoning for the survey. The person who posted the comment declined to be identified out of fear of reprisals from the district.

The comment left on the story says teachers did not request additional professional learning days. The comment says the impetus for the survey came from a request for teachers to participate in training that fell outside the scope of their contracts with the district. Following the uproar, the school system scrapped the survey.

Herndon said CSD threw teachers under the school bus when presenting the survey to parents.

“Unintentionally,” he added. “Social media has become awful and people have lost any barrier to call teachers out by name. Who defends them? They feel like no one has their back, but they don’t feel like defending themselves.”

Herndon supports attempts by black parents to eliminate discrimination in the school system. He also supports the school system’s policy of treating transgender students according to their preferred gender identity.

“I’m proud to live in a school district that is willing to be open and accepting,” he said.

When asked if he supported the School Board hiring a lobbyist to kill an annexation bill that would’ve decoupled city and school annexations, Herndon was reluctant to directly criticize the board.

“It was a bad bill,” Herndon said. ” … If that bill had passed, it would’ve created a lot of hurdles in terms of the tax base, how schools run, plans around Decatur Housing Authority, future stuff. Does that mean we shouldn’t work with [the county] to write a better annexation bill? No. Do I want to hire a lobbyist? No, never.”

Colleagues who have worked with him describe Herndon as someone who is thoughtful, collaborative and willing to change his mind when presented with compelling evidence.

Tennielle Bailey, a parent and former member of the Decatur Education Foundation Board, said she was “excited” that Herndon stepped up to run.

“He’s willing to get an understanding of things he doesn’t know about, which I love about him, and he doesn’t seem to turn a blind eye to things that are difficult and things he doesn’t completely understand,” she said. “I wish we could have that in all of our public officials, to be honest.”

Dianna Herron-Watson, who served with Herndon on the Glennwood SLT, had similar experiences working with him.

“He wasn’t afraid to change his opinion based on his studies,” she said. “He’ll take time to figure out something and study the situation. When it came down to making a final decision, he was also a collaborator. Sometimes decisions went his way, and other times they didn’t. He was always there, being supportive of what was best for kids.”

City elections are Nov. 5. Here are the rules for anyone who wants to seek a seat on the City Commission or School Board this year.

One City Commissioner from Election District at Large

One Decatur Board of Education member from Election District 1, Post B

One Decatur Board of Education member from Election District 2, Post B

One Decatur Board of Education member, At-Large (Editor’s note: The election for this seat will be to finish Annie Caiola’s term. The winner of this election will have to run for another four-year term after serving a short two-year term.)