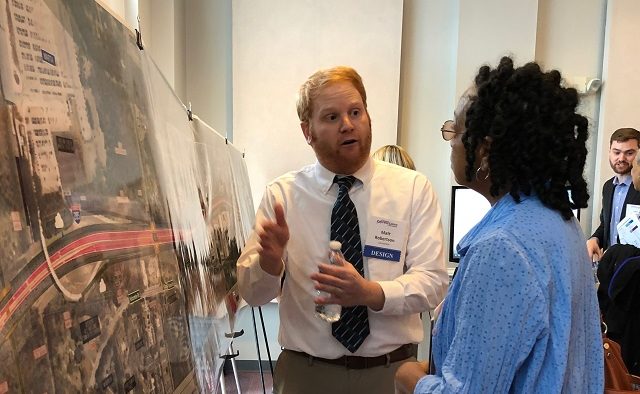 Members of the public attended a June 25 open house at the Rehoboth Baptist Church on Lawrenceville Highway in Tucker, to learn about a Georgia Department of Transportation (GDOT) project adding express lanes along 10 miles of I-285 in DeKalb County. Photo by Rosie Manins
Share

Major road construction is coming to DeKalb County as part of a multi-billion-dollar effort by the Georgia Department of Transportation (GDOT) to improve traffic on and around Interstate 285.

Residents in the eastern parts of metro Atlanta, including much of DeKalb County, are now being asked to learn about the section of work due to affect them the most, and to provide feedback so designers can tweak plans ahead of a 2022 construction start date.

The I-285 Eastside Express Lanes project will see a new express lane added in each direction along 10 miles of I-285 between I-20 and Henderson Road, pushing the road width out at least 15 feet on each side to maintain the current number of regular traffic lanes.

To see a GDOT fact sheet on the project, click here. 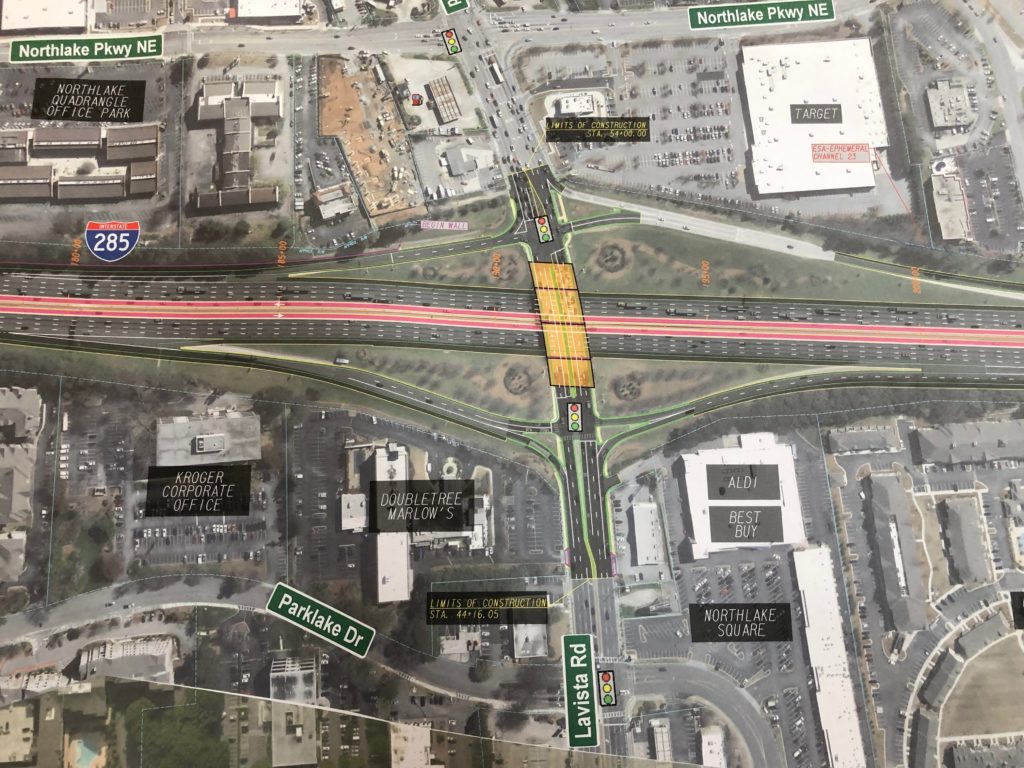 Detail of the project map in Tucker.

It is one of 11 projects that make up the GDOT’s $4.6 billion Major Mobility Investment Program, which aims to reduce traffic congestion and speed up commute times throughout metro Atlanta by 2030 through the addition of 300 miles of highway lanes – essentially adding express lanes along the entire top half of the perimeter.

“I think it’s wonderful,” Decatur resident Norma Rickmond said June 25 at a public open house for the Eastside project, held in the Rehoboth Baptist Church on Lawrenceville Highway in Tucker.

“I didn’t want this at first, but I think it’s going to be beautiful and save people a lot of time and money,” she said.

Rickmond attended the June 25 open house – one of five for the Eastside project – with her neighbor Sandra Mason.

Both live on Gladesworth Lane in Decatur, about a quarter mile from I-285 near Glenwood Road, where construction is set to end some time between 2026 and 2028.

Mason said her curiosity peaked when surveyors set up outside her house, and she was relieved to learn at the public information session that GDOT does not plan to take her home as part of the highway expansion. 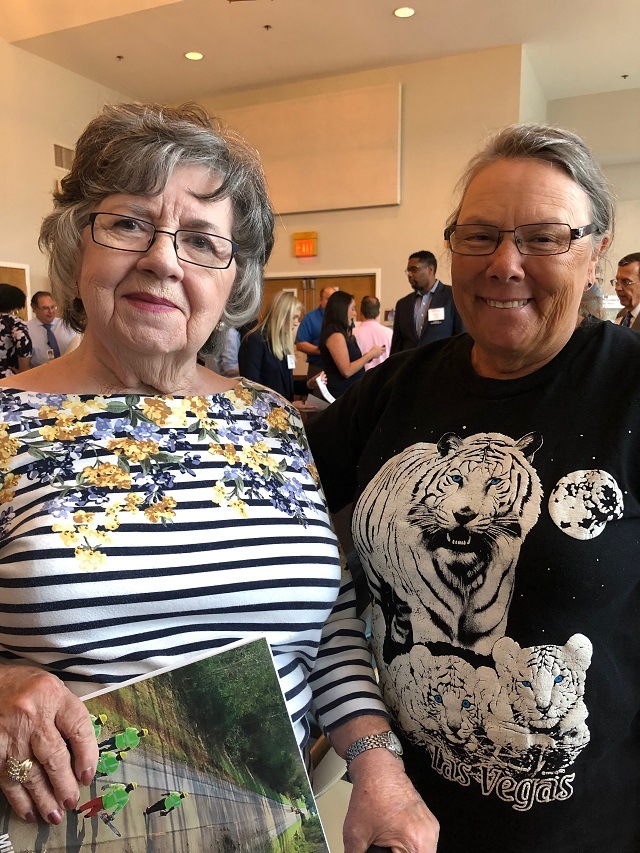 The 10-mile Eastside portion of the highway renewal will not require much land acquisition at all, project manager Tim Matthews told Decaturish at the open house.

“On this corridor of I-285 we don’t have as much right-of-way impacts, so it’s certainly not as controversial as maybe some of the other corridors,” he said.

Matthews said most of the work can fit within GDOT’s existing right-of-way along the Eastside corridor, and no homes or businesses are being taken for this section.

“It would be the small slip takes, maybe five or ten feet here and there, just in our most congested areas, our densely populated areas,” he said. “The right of way estimate is about $3 million, so in the grand scheme of a billion-dollar project, $3 million is nothing, so in that regard it has very minimal impact.”

More concern by residents and business owners is being felt at the top of the perimeter, where population density has pushed properties right up to GDOT’s right-of-way and the projects there will have a far greater impact.

But for DeKalb residents, the enhancements will still involve at least four years of construction-related traffic delays.

GDOT plans to start its Eastside project at the top, just north of Henderson Road in Tucker, in late 2022 and finish just south of Glenwood Road in Decatur, opening to traffic some time between 2026 and 2028.

Matthews said there will be “construction fatigue” during the build, but GDOT will do its best to manage traffic and inform motorists throughout.

“We believe the benefits that will be gained are going to be worth it,” he said. “We’re going to have a corridor that has express lanes, to give drivers that choice to have that reliable trip time.”

GDOT estimates the I-285 revamp as a whole will reduce 6,000-plus hours of traffic delay every day on the perimeter’s top half.

Using the express lanes will cost at least 10 cents per mile, although during periods of low demand, users will pay a minimum of 50 cents per trip, regardless of trip length.

There is no cost for bus transit riders, state-registered vanpools, or public transit providers, and GDOT expects there to be a 44 percent reduction in travel time for transit vehicles overall, worth $147 million in transit benefits.

The length of construction and increase in highway noise are main concerns of many who have attended the Eastside project open houses, including Rickmond, who cited the impacts of other major road construction in DeKalb.

“When they did the Candler Road bridge it took them five years. It’s beautiful now, but it was hell going through there when there were only two lanes open,” she said.

Rickmond remains supportive of the I-285 Eastside corridor expansion and hopes it improves safety.

“Right now when I-285 goes into I-20 Westbound there are always a lot of accidents there,” Rickmond said.

Matthews said GDOT’s goal with its project open houses is to educate people about the work and gather as much feedback as possible.

The public can view large, detailed maps of the entire project, which show GDOT’s right-of-way and the proposed changes over top of existing roads and properties.

People can also watch a video simulation of the completed interstate and speak one-on-one with GDOT staff, project planners, and environmental experts to understand how it will work and personally affect them.

Here is the video simulation on the GDOT website:

GDOT is encouraging everyone to share their opinions and suggestions on the project either in person at public open houses, by mail or online by July 15.

All maps, fact sheets, and project resources are available on the project website: http://www.dot.ga.gov/DS/GEL/I285Eastside and comments can be made online at www.dot.ga.gov/PS/Public/PublicOutreach.

At the request of the city of Tucker, DeKalb County, and the Northlake-Tucker CID, GDOT is also investigating the feasibility of adding an access point at Northlake Parkway, and wants public feedback on that possibility, which would require the removal of the existing general purpose exit and entrance ramps there.

The final open house for the Eastside corridor project is on Thursday, June 27 from 4:30 p.m. to 7:30 p.m. at the DoubleTree by Hilton Hotel Atlanta-Northlake at 4156 Lavista Road.

Hard copies of project plans are available at the GDOT District 7 office at 5025 New Peachtree Road in Chamblee, Tucker City Hall at 4119 Adrian Street in Tucker, and Clarkston City Hall at 1055 Rowland Street in Clarkston.