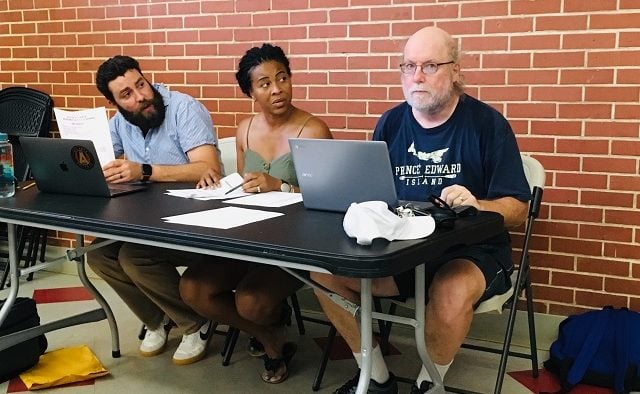 Recent changes in city of Atlanta ordinances appear to be spurring development in Edgewood. The zoning updates adopted in January of this year allow so-called “missing middle”  multi-family multi-unit (MR-MU) housing and reduce off-street parking requirements near MARTA stations.  These alterations were made partially in response to Atlanta’s ongoing rapid growth and the attendant rise in housing costs.

Five rezoning requests for proposed apartment complexes were on the agenda for the NPU-O meeting on June 25.

All of the proposed sites are in the Edgewood neighborhood:  115 Mayson Avenue NE, 2161 Oakview Road SE, 1449 Macklone Street NE, 1456 Macklone Street NE, and 114 Wesley Avenue NE.  All five sought rezoning from R-4 or R-5 residential lots to MR-MU lots, and were accompanied by requests to amend the Atlanta Comprehensive Development Plan designation for the lots from low-density to medium-density.

“There was a bit of discussion between having enough parking for residents and knowing that we’re close to MARTA, but also knowing that all of the other neighborhoods come and park in our neighborhood to go to MARTA,” said Laurie Ireland from the ONE zoning committee.

The complex will have no more than 30 parking spaces.

“The proximity of this property to the MARTA station under this new rezoning ordinance actually says zero parking.  We want to encourage that.  We all know Mayson is a tight street.  People park on Mayson, people will continue to park on Mayson, so we tried to do a compromise,” said Kyle Williams of Williams Teusink, representing Spencer-Love Homes.

For the two sites on Macklone planned by Orion Development, residents expressed concerns about trash disposal and how the apartment complexes would fit into the community.

“We had a really big concern about trash management just because the city puts the trash cans back in the middle of the street and we didn’t want twenty-four of those,” Ireland said. “We asked them to do some research and we believe that there is a workable solution.”

Alex Brock of Smith Gambrell Russell stated that trash receptacles would be shared between two units and a private trash service would handle pickup. Parking will be in an existing adjacent lot, and an open area at one end will be landscaped with plantings and seating as a community space.  Market rate for the units will be about $1,250, with 15 percent reserved as affordable housing for people making 80 percent of area median income.

The NPU-O approved rezoning for 115 Mayson, 1449 Macklone and 1456 Macklone, along with the amendments to the CDP.

The rezoning requests for 2161 Oakview Road and 114 Wesley Avenue were deferred until the July meeting.

– Edgewood-Candler Park MARTA station’s south side parking lot will be closed starting July 22 for 22 months while the station is being refurbished. Stairs and escalators will be closed starting in November. Elevators will stay open. Residents who drive to park at Edgewood-Candler Park Station are encouraged to park at East Lake Station instead of parking on the street.