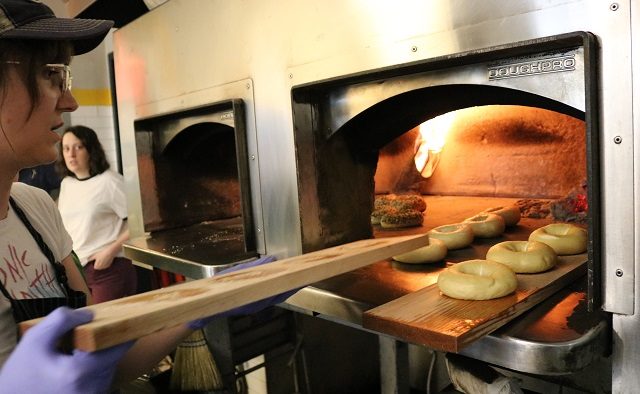 Photo Courtesy of The Deer and the Dove.
Share

A year after Cakes & Ale closed in downtown Decatur, a new restaurant is set to make its Decatur debut.

The Deer and The Dove and its adjacent coffee bar B-Side will open Tuesday, June 18, on the Decatur Square, according to manager Dut Goodman. The address is 155 Sycamore Street.

The hours will be as follows:

The Deer and The Dove

On Wednesday, June 12, B-side held a pop-up for customers to get a taste of what’s in store for them when everything opens, serving up Counter Culture Coffee and wood fired bagels.

There will be additional pop ups on Friday and Saturday of this week. To see the company’s website, click here.

Here’s more information from The Deer and the Dove:

At B-Side, guests will be able to enjoy NY bodega-style breakfast and lunch sandwiches (think “egg on a roll”), Atlanta’s only wood-fired bagels, salads, soups and other bites. Crafted in house over an open flame, B-Side’s wood-fired bagels will feature classic and inventive flavors like the Everything Veggie bagel, which is made with a special seasoning blend from local artisan Beautiful Briny Sea. The restaurant will also house a full-service coffee bar with espresso-based drinks using Counter Culture’s coffee. Starting late summer, B-Side will transform into a bar in the evenings with a focus on natural wines, cocktails and small plates, and on occasion, the space will host pop-up dinners from local and visiting chefs.

The team will include a roster of well-known, local restaurant industry veterans, including:

Named a 2012 Atlanta Rising Star Sustainable Chef by StarChefs, Koval is active in the Atlanta restaurant and nonprofit community and known for his dedication to and practice of the Slow Food movement. He has worked as Executive Sous Chef at Canoe in Vinings before joining the team at Concentrics Restaurant and the Opening Chef at Farm Burger. He will also continue to serve as Executive Chef and Partner at Wrecking Bar Brewpub.

Prior to serving as Partner and Co-owner of Farm Burger, Frangos was part of the management team for Atlanta-based Concentrics Restaurants group, where he served as Director of Operations of TWELVE Hotels’ Room and Lobby restaurants, as well as opening General Manager of TROIS. He also served as Operations Consultant for Farm 255 in Athens, Georgia, Owner/Operator of Victory 96 State Street, Manager of Peter Hoffman’s Savoy of New York and Nora Pouillon’s Restaurant Nora and Restaurant Manager of Eric and Bruce Bromberg’s Blue Ribbon Bakery.

A two-decade veteran of the restaurant industry, Evan Cordes was the Chef and Owner of Cast Iron in the Old Fourth Ward.

Kristina has worked in the food industry since she was eight, filling sodas at her parent’s counter service restaurant. She has spent the last eight years slinging wine at Sotto Sotto. She hopes to bring a culture of trust and hospitality to The Deer and The Dove, while integrating an exciting and sustainable wine list.

Jason started bartending while attending Georgia State University and since then has worked behind the bar at some of Atlanta’s favorite haunts. He hopes to bring simple yet refined cocktails and the highest standard of service and hospitality to his guests and friends alike.

A native Atlantan, Miranda has baked in the kitchens of acclaimed local restaurants including Sun in My Belly, Empire State South, The General Muir and Root Baking Co., and has also co-managed the pastry department for Electric Hospitality’s restaurants Ladybird Grove & Mess Hall, Golden Eagle and Muchacho.

Dut started in the coffee industry by accident, and 13 years later he is still here. He worked with Terry at Wrecking Bar and couldn’t wait to join the team and bring good coffee to the masses.

Luke Wilkinson from Local Architects and Brian Buckner designed the two restaurants. A focal point along the downtown square, The Deer and The Dove dons a deep grey painted-brick exterior with bright pops of goldenrod yellow and a mural of Jen Carter’s designed logo by Squared Away Signs’ William Mitchell along the building’s side. Upon entering the restaurant, guests will be welcomed by an open dining room with a laid back, modern feel. The space draws inspiration from the aesthetic values of Chef Koval’s formative days as a skater and his passion for pursuing a cooking career—minimal, celebrated materiality with skater kid attitude.

A row of intimate booths sit at the restaurant’s center, with additional tables and an inviting bar area filling up the remainder of the room. Clean, white walls line the interior, while a curated selection of art—including a custom piece by DOZFY painted on four repurposed sound panels in the center of the dining area—and prized hunting trophies from Koval’s father ornament the space. At the restaurant’s back, a long, shared hallway connects The Deer and The Dove to sister-spot B-Side, doubling as an interior passageway for those seeking to move seamlessly from dinner to late-night cocktails next door.

The Deer and The Dove will accept reservations via Resy.