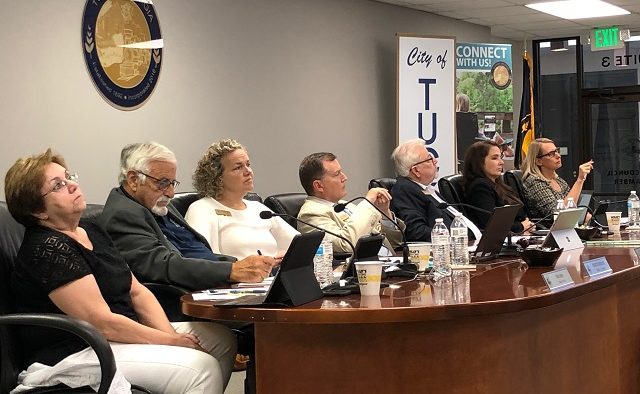 The Tucker City Council on June 26 approved a property tax cut for residents.

The tax cut is a result of the city taking over its parks maintenance and operations from DeKalb County.

It is the first time Tucker is levying a local city tax since becoming an incorporated municipality in 2016, breaking away from full DeKalb County millage rates.

Homeowners in Tucker will see a 55-cent reduction in every $1,000 of taxable property value.

For the past three years, Tucker has had the same millage rate as unincorporated DeKalb, because the city has relied on the county maintaining and operating all civic services.

Now that Tucker is taking over its parks, it has adopted a lesser millage rate for that service than what DeKalb would have implemented.

DeKalb calculated its 2019 tax rate for Tucker parks as 1.458 mills, while the city’s rate for that service is 0.9 mills, meaning Tucker residents will now pay a county tax of 19.352 mills instead of the full DeKalb portion of property taxes, which remains unchanged at 20.81 mills.

Added to the DeKalb rate will be Tucker’s new tax rate of 0.9 mills, for a combined county and city portion of 20.252 mills.

The DeKalb County School District tax rate is 23.18 mills, for a total millage rate for Tucker taxpayers of $43.432 for every $1,000 of their property’s taxable value.

Based on the latest tax digest for DeKalb County – which sets the value of all county properties and therefore millage rates – Tucker is expecting to generate at least $1.5 million annually in city taxes, which it can use for general government purposes.

A preliminary digest by DeKalb County put the value of a mill at just over $2 million.

The city council also approved Tucker Mayor Frank Auman to sign an intergovernmental agreement with DeKalb County to allow its tax commissioner to collect taxes on behalf of Tucker, for an initial annual fee of $50,000.

Auman said rather than approving the agreement at the June 26 meeting outright, he preferred to first talk with DeKalb over its tax collection fees before signing the agreement in early July.

“I just got a little heartburn over the pricing,” he said.

– The city council amended its 2016 zoning ordinance and maps to be better aligned with its comprehensive plan, making some changes to its overlay districts. Included in the changes are greater maximums for parking when over half of a development’s parking spaces are within a parking deck, as well as reduced zoning setbacks on Lavista Road, east of Fellowship Road. Two people spoke in support of the changes, while four spoke in opposition, during the second of two public hearings. They raised issues including proposed zoning changes to parts of the Northlake area, from commercial to neighborhood. One opposing submitter asked for certain retail uses – such as nightclubs – to be specifically banned in the Northlake area, if zoning changes allow more commercial activity. Another said the council should increase its proposed three-story height limit for building developments in some areas. Councilwoman Michelle Penkava, representing District 3 Post 1, said the changes make the zoning ordinance more “clear cut” for property owners, developers and city staff. District 3 Post 2 councilwoman Anne Lerner said the changes reflect the community feedback received during extensive public consultation.

– The council imposed its second temporary ban on the use and rental of two-wheeled electric scooters within Tucker, citing safety and public nuisance concerns and the need for more time to develop regulations. The council first banned electric scooters on January 14 this year, for a period of 120 days. That ban expired mid-May. The new ban, also for 120 days, is effective immediately. Other cities throughout metro Atlanta, Georgia and across the country have been banning the use of electric scooters, as people have been killed and injured in incidents involving the devices, which are regularly dumped by users to clutter sidewalks, roads, trails and other public spaces. There is currently no state legislation in Georgia addressing electric scooters, despite them becoming a widespread popular method of cheap and easily accessible travel through cities and downtown areas.

– PATH Foundation Executive Director Ed McBrayer and trail and landscape planner Greta deMayo, of Atlanta design and consultancy firm KAIZEN Collaborative, presented options for constructing three main trail segments throughout Tucker, at an estimated cost of around $6 million. The trails would link Tucker High School to downtown as well as to Kelley Cofer Park, and offer a scenic route to downtown, running parallel to Idlewood Road. The work, as currently proposed, could be finished by 2024 and would start with constructing a boardwalk over and around the lake at Kelley Cofer Park to help make it more of a recreational destination. The council adopted its first Trail Master Plan in April this year, identifying 27 segments of trails covering 32 miles. It has just under $1 million of SPLOST revenue budgeted for trail implementation in the 2020 fiscal year, but that is a couple of hundred thousand dollars short of the estimated cost of completing the proposed Kelley Cofer Park work. McBrayer offered to split that shortfall with the city, and said subsequent phases of the planned trail development would be harder to implement because they involved land acquisition. “The Kelley Cofer Park trail is probably as easy as it’s going to get,” he said. “We think this is the way to do it.”

– Grady Smith, Principal of Atlanta-based civil engineering firm VHB, presented an update on the DeKalb County Transit Master Plan, which outlines $25 billion in projects to improve and expand public transportation throughout the county for the benefit of residents and businesses over the next 30 years. A year in the making, the plan is due to be considered by the DeKalb County Board of Commissioners on June 27 and finalized in July. The Tucker City Council unanimously passed a resolution supporting the plan, on the basis that Tucker residents and others have a say on the development and implementation of any of its projects. Smith, the plan project manager, said the existing penny sales tax for transit in DeKalb is being entirely used up by overdue maintenance and repair work on the 40-year-old MARTA system and so significant upgrades, as proposed in the county’s transit master plan, are not covered by existing budgets and may require an additional sales tax in conjunction with other sources of funding. DeKalb’s total tax take is currently 8 percent. Smith said an additional half-penny sales tax in the county would generate $1.85 billion for transit over the plan’s 30 years, while the maximum allowed full penny sales tax would generate $3.65 billion in that time.

– The council awarded a $19,353 contract to construction firm F.H. Paschen to remove an old, deteriorating wooden retaining wall in Kelley Cofer Park and replace it with a new concrete wall, needed to stabilize a nearby power pole.

– The council adopted a resolution allowing the city attorney to initiate condemnation proceedings to acquire a house on Lavista Road to turn it into the Tucker City Hall. As there is no clear title for the property, the council has not yet been able to negotiate a purchase of the single-story, three-bedroom home at 5121 Lavista Road. Tucker staff said the occupants are open to selling, and the council needs to obtain the property through eminent domain, which allows governments to acquire land for public purposes.

– A Historic Resources Survey for Tucker was presented to the council, following a year of work by Stone Mountain-based cultural resource management firm New South Associates. Principal Investigator Jackie Tyson said the 190-page survey report outlines Tucker’s history, its remaining historic assets and resources, and how the city could best promote, manage and develop them into the future.

– The council considered an application for a Special Land Use Permit to allow a tattoo store and art gallery at 2316 Main Street. Krystal Rogers, the owner of Witching Hour Art Collective, wants to run her business from a 726 sq. ft. retail suite behind the Freakin Incan restaurant and The Garden Enthusiast store. Tucker city staff recommended the permit be denied, as there is already a tattoo shop about 900 feet from the proposed location, and another could result in a “disproportionate proliferation” of that type of business in the area, their report to the council stated. Just over a dozen people have submitted their written support for the application, which will be subject to a second read and public hearing at the council’s next regular meeting on July 8.

– Mayor Auman announced two new hires. Toni Jo Howard is Tucker’s new Financial Director, and Jennifer Downer is the city’s citizen responder, who will be the first point of contact for the public.

Also this month, at the council’s June 10 regular meeting, the mayor and councilors:

– Extended Tucker’s contract with consulting firm Jacobs, which has been managing Tucker’s administration, finance, and community development departments since the city was formed in 2016. The new contract runs through 2023 and includes a $107,021 saving for the city, offered by Jacobs as an incentive for early renewal of the initial contract, set to expire in 2020.

– Awarded a $62,582 contract to Chamblee-based construction firm JOC Construction to repair and expand the existing dock at Lake Erin.

– Approved $19,000 of additional spending on a project to install lighting at the tennis courts at Henderson Park, bringing the total project cost to $116,000.