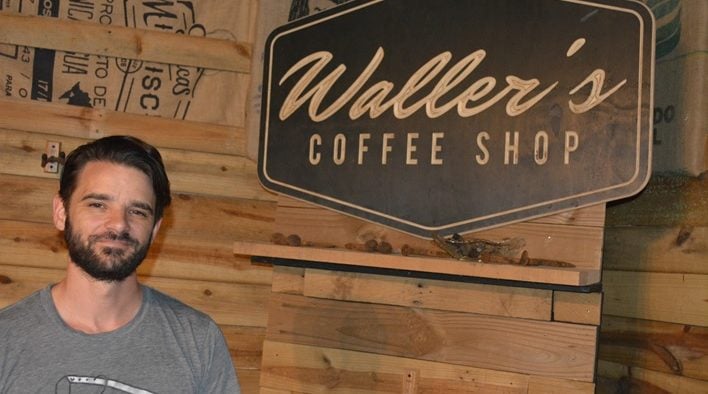 Owner Jason Waller’s background is in music, but the idea for Waller’s came to him a few years ago when he realized he wanted a coffee shop within walking distance of his house that provided quality coffee.

Waller first obtained the lease on DeKalb Industrial Way in August 2017, but, because of permitting issues, wasn’t able to open the Coffee Shop until February 2019. He has relied primarily on word-of-mouth and social media to promote his business.

“As a musician, we always make fun of ‘exposure bucks,’ people saying ‘do this gig, it’ll be good exposure for you,’ but as a musician who isn’t trying to make it, I was like ‘I can’t do that gig,’” Waller said. “But it flipped when I became a venue owner because exposure is everything.”

Seventy-five percent of the people who walk in the shop are new customers, according to Waller.

“This is a customer service business,” Waller said. “We happen to sell coffee and sandwiches and we provide entertainment and different community programs. Really it’s about making your day better.”

Customer service and interaction wasn’t always the easiest for Waller, however. He opened his business at a time when he was trying to “take back” his mental health.

“Before I was depressed and interacting with humans on a daily basis would’ve exhausted me,” he said.

Before the shop opened, he used the building to film his Depression Awareness Dude (D.A.D) videos on YouTube, where he talked to music professionals about mental health. He still films these videos at the shop and invites Mental Health professionals into the shop on Mondays.

Now, he most enjoys the interactions he has with customers while making someone’s coffee.

“I love being back there. I love interacting with people and get to know the community,” he said.

In addition to nightly entertainment, from open mic on Tuesdays to regular Silkworm Smugglers appearances on Mondays, the property itself is a gathering space. Behind the shop lies chairs, picnic tables, and a creek, where parents relax and children play. The shop hosts Family Fun Days twice a month, ranging from kids’ open mic to puppet shows.

Waller recently designated an events manager and a bar manager, allowing him to step back and think about the long-term. He hopes to add team-building and outdoor education to the offerings at Waller’s, as well as expand the shop’s mental health focus.