Your Community, Your Litter – Pick It Up! campaign spread through DeKalb County

Your Community, Your Litter – Pick It Up! campaign spread through DeKalb County 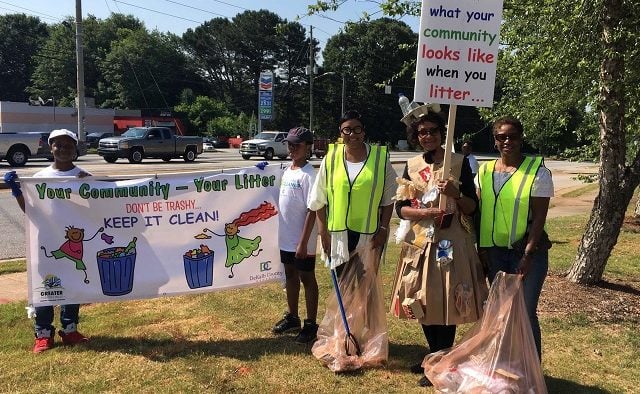 Your Community, Your Litter – Pick It Up! campaign was started in March of this year “to encourage DeKalb residents to clean up their communities and eliminate litter throughout the county,” according to a recent press release.

The campaign was headed up by the Greater Hidden Hills Community Development Corporation and DeKalb County Commissioner Lorraine Cochran-Johnson, which developed into a larger community effort by groups around DeKalb County.

On June 1, there was a DeKalb County Clean Up Day to push anti-litter awareness. Sixty volunteers came out to pick up trash and dispose of tires, where they gathered almost 50 bags of trash and two tires over the course of four hours.

In addition to anti-litter efforts, Greater Hidden Hills Community Development Corporation members wore costumes and brought signs to the Clean Up Day to grab the attention of people walking and driving by at the intersection of Covington Highway and South Hairston Road.

“I believe our effort may have been among the largest countywide cleanups undertaken in a single day,” Commissioner Cochran-Johnson said in a recent press release. “I was very inspired by the dedication our site captains displayed in organizing their cleanup locations, and want to especially thank Jan Costello, Phyllis Frierson, Nadine Rivers-Johnson, Mary Gude, and Stacey Harris for mobilizing their communities.”