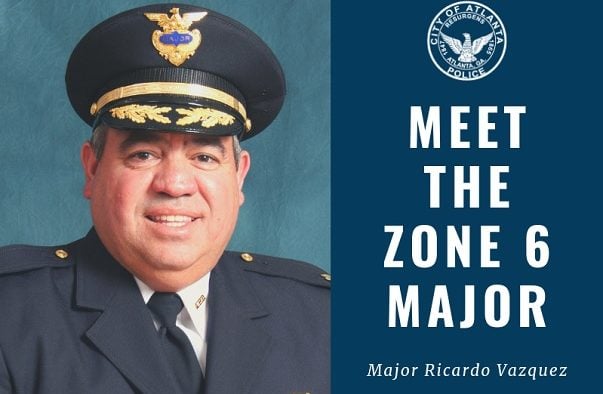 Maj. Ricardo Vazquez has worked for APD for decades, starting out as a patrol officer in northeast Atlanta.

“He grew up in Miami Florida and is one of two sons to immigrant parents and is a first-generation Latino American,” the Police Departments ays. “Vazquez is married to his high school sweetheart and is the proud father of three young men. He enjoys quality time with his family and any day he can cook with his various outdoor smokers.”

Here is his full biography, provided by the Atlanta Police Department:

Major Vazquez began his career 29 years ago as a patrol officer in northeast Atlanta. After graduating from the academy, he worked uniform patrol in Zone 2 – northeast Atlanta and Zone 5 – downtown Atlanta. In 1995, he was promoted to the rank of investigator and assigned to the Intelligence – Organized Crime Unit. Vazquez was then assigned to the Special Enforcement Section, where he had additional assignments in the Narcotics Unit and the High Intensity Drug Trafficking Areas (HIDTA) – a federal multi-jurisdictional drug task force charged with dismantling drug trafficking organizations in metro Atlanta. While assigned to the HIDTA task force, Vazquez had numerous undercover roles that led to several large narcotics seizures. In 2003, he was transferred to the “Elite Hat Squad,” Homicide Unit.

Promoted to the rank of sergeant in 2007, he was a frontline supervisor in Zone 1 – northwest Atlanta where he supervised patrol officers. Soon after his promotion, Vazquez was assigned back to the Homicide Unit to supervise investigators during homicide investigations. He was also a supervisor on the Officer Involved Shooting Team; a team of highly skilled investigators tasked with examining and responding to all incidents of deadly force by the City of Atlanta police officers.

Vazquez was promoted to the rank of lieutenant in 2014 and returned to patrol operations where he was assigned to Zone 2 as a watch commander. In 2015, Vazquez was tasked with commanding the Fugitive Unit. This unit included investigators assigned to the Southeast Regional Fugitive Task Force organized by the United States Marshals Service and the Atlanta Metro Major Offenders task force organized by the FBI. The unit was responsible for apprehending dangerous felons wanted by the City of Atlanta Police Department, other jurisdictions and individuals identified by the task force. In 2017, Vazquez returned to the Homicide Unit as the unit commander. He was responsible for overseeing all homicide investigations from three squads: Homicide Unit, Complex Case Squad and the Cold Case Squad.

In August of 2017, Vazquez was promoted to captain and became the first sworn Spanish speaking Latino on the command staff. Assigned to Zone 5 as the assistant zone commander, he was pivotal in planning and executing responses to several large-scale national events to include planning and executing various patrol and traffic plans during the SEC Football Championship Game, Chick-fil-A Bowl Peach Bowl, College Football Playoff National Championship and Super Bowl LIII. In January of 2019, Vazquez was named the assistant commander of the Major Crime Section, responsible for overseeing all the criminal investigations in the Homicide Unit, Special Victims Unit, Robbery Unit, Gun Assault Team and the Major Fraud Unit.

Promoted to the rank of major in May 2019, Vazquez is currently the Zone 6 – east Atlanta commander. Vazquez is very active with Neighborhood Planning Units and community activities designed to reduce crime.

Vazquez graduated from William Penn University with a BA in Sociology. He is a graduate of Northwestern University’s Center for Public Safety, Senior Management Institute for Police and the Atlanta Police Leadership Institute tier 4 program and is a P.O.S.T. Certified Instructor.

He grew up in Miami Florida and is one of two sons to immigrant parents and is a first-generation Latino American. Vazquez is married to his high school sweetheart and is the proud father of three young men. He enjoys quality time with his family and any day he can cook with his various outdoor smokers.