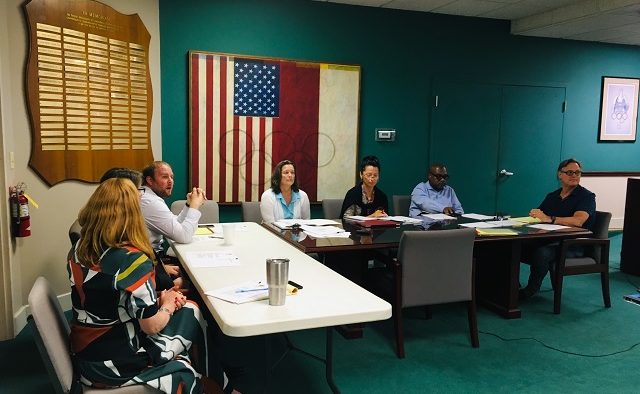 The URA’s powers include appropriating funds, entering contracts, exercising eminent domain, zoning or rezoning, and acquiring or disposing of property within the predetermined limits of the urban redevelopment zone with fewer restrictions than normal. The process requires that the city designate specific blighted areas appropriate for redevelopment, form a detailed plan and hold public meetings before moving forward.

When the URA was formed, it was determined that the first iteration of its governing board would be the same members as the Avondale Estates Board of Mayor and Commissioners, and that the first order of business would be to approve bylaws so that the agency can conduct future business.  A draft of bylaws written by Teresa Finister of Finister of Murray Barnes Finister LLP was submitted for consideration by the board.

Discussion revolved mainly around how to determine future membership in the board, how to prevent and resolve conflicts of interest, and how to involve other agencies whose input will be needed and useful. Commissioner Lionel Laratte suggested that members of the Historic Preservation Committee and Zoning Board among others could be ex officio members of the URA, while Commissioner Lisa Shortell suggested that decisions being considered by the URA go through those organizations.

Commissioner Adela Yelton felt that a statement of purpose and a clear code of ethics would be helpful. Shortell stated that rules about ownership of property in a project or proposed project should be specifically included in the code of ethics. Laratte suggested that a rule previously proposed by Mayor Jonathan Elmore restraining communication by members of the board with developers outside of public meetings be included as well.

In public comment Jan Hover, Dee Merriam, and Candace Jones all expressed a desire to see the meetings posted further ahead of time so that more residents might attend.

During the City Commission work session that preceded the URA meeting, Chair Dave Dieters of the Downtown Development Authority brought three spending requests to the commission, out of money already earmarked for the DDA from the Trammell Crow Residential development.

The first is up to $6,000 to demolish the ceiling of the city-owned building at 90 North Avondale and prepare it for rental.

“The second request is up to $12,000 to develop and execute an education and communication plan to constantly refresh and provide information to the public regarding our efforts to develop the five acres that we jointly own with the city,” said Dieters. “The third request is up to $40,000 of engineering cost to develop the parking lot, which we commonly refer to as ‘the albatross,’ behind 90 North Avondale.”

The City Commission discussed the formation of a board for a new Arboretum, how many members it should have and who to include.  The purpose of the board will be to manage the Arboretum once it is established. The city has received seven applications.

The city manager requested $2,400 for incentives as an addition to a contract for a wellness program that the city has with Emory for city employees.  The money will be used to provide prizes to employees who meet wellness goals.

A request for an easement to build a driveway on city property on the north side of the house at 3 Clarendon was discussed.

The house currently shares a driveway which the homeowner stated was too narrow for two cars. Shortell expressed concern that allowing the easement would set a precedent and potentially disrupt city infrastructure projects and plans to develop the property as greenspace. The homeowner was asked to attempt to find other solutions with his neighbor who shares the driveway and to provide surveys of both properties before bringing the request back to the board.