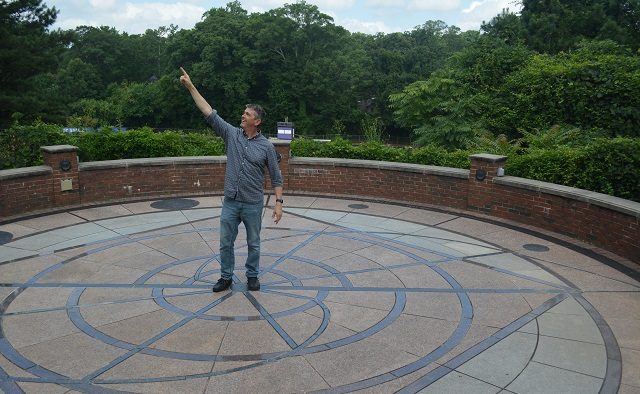 When he first welcomes a school group to the Bradley Observatory, Chris DePree stands on the Observatory’s plaza and explains its many functions. He was involved with the plaza’s design and creation in 2000. Photo by Christopher Rosselot
Share

With the start of the 2019-2020 school year around the corner, the Bradley Observatory at Agnes Scott College is broadening its outreach to local schools.

The Observatory already has numerous examples of what Director and Astronomy Professor Chris DePree calls “informal science education” available to the Decatur community. Many of them involve modelling the solar system, including a representation of planetary size and orbit on the Observatory’s plaza and the plaza’s role as the center of the Metro Atlanta Solar System (MASS).

Consequently, it made perfect sense for DePree to provide help in installing another scale model, this time made by an art teacher in a long hallway at Avondale Elementary School.

The Observatory has an existing partnership with Avondale Elementary. As with sixth graders from Renfroe Middle and Druid Hills Middle, students take a field trip to the Observatory as a hands-on supplement to their astronomy lessons. In these visits, students first learn about the scientific nuances of the plaza in front of the Observatory. Next, they view the telescope and spend time in the planetarium.

DePree also hopes to hold evening and night time visits this year for sixth grade classes at Renfroe. Night visits (with clear skies) would allow students to actually use the telescope.

Having previously taught high school for two years, DePree values the excitement about science that experiences like visiting the Observatory can provide.

“I know that sometimes teaching subjects like physics, students aren’t all that keen on just working problems or the dry mathematics of it, but if they can see an application like, ”Oh, physics is useful in this?’ That’s cool,” DePree said.

As the Observatory’s outreach fellow (funded by the Georgia Space Grant Consortium), rising senior Sara Sloman enjoys leading tours for students who have never been in a planetarium.

“A lot of the times we get kids that have never been in a planetarium before… and that’s always exciting for them, and so it’s exciting for me,” she said.

DePree often sees students’ eyes widen the most when he explains the functioning of the MASS. These reactions are exactly what he hoped for when helped design the MASS in 2009.

To celebrate the 400th Anniversary of the telescope in 2009, the Atlanta Airport displayed astronomical images. DePree saw a chance to implement a city-wide model solar system. With funding from a NASA grant, he and his students placed posters with scale models of the planets around the city in public locations also within a properly modelled orbit. The Bradley Observatory’s plaza serves as the sun. All of the inner planets are housed within Decatur, while the furthest planet from the sun, Neptune, is located at Sweetwater Creek State Park.

DePree was also involved with implementing ViewSpace, a NASA program, at monitors in Renfroe, Druid Hills and Avondale. This program displays up-to-date information about the solar system, galaxy and planet, keeping it at the forefront of students’ minds.

He hopes that the Bradley Observatory can expand its outreach to other local elementary schools in coming years.