Update: The Decatur City Commission approved both of the items discussed in this article. Here is our earlier story …

The Decatur City Commission at its July 15 meeting will consider a number of items, including proposals to create new school speed zones and a proposal to allow ice cream shop Butter & Cream to have a vendor cart on the Square.

The July 15 meeting begins with a work session at 5:45 p.m. for a “Decatur Legacy Park Housing Update” followed by another work session to discuss improvements to the railroad crossing at Atlanta Avenue. The regular meeting begins at 7:30 p.m. All meetings will be held at City Hall, located at 509 North McDonough Street, and the meetings are open to the public. To see the full agenda, click here.

The school speed zones will restrict speeds in those areas during start and dismissal times for nearby schools. 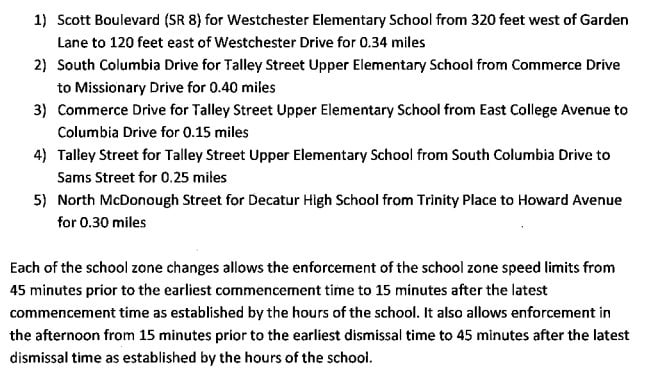 Source: The city of Decatur.

The vendor cart proposal the City Commission will consider allows Butter & Cream to operate a cart on the Square Thursday through Sunday until Sept. 30.

The proposal comes after a Decaturish investigation into the vendor cart pilot program and the city’s efforts to promote one local dessert company, Steel City Pops, while edging out the company’s primary competitor, King of Pops. Among other findings, the investigation showed that the city did not have a policy specifying it would give a preference to local businesses when allowing carts to vend on the Square, even though the city repeatedly cited guidelines or a policy that would allow the city to do this. Prior to the publication of the Decaturish investigation, city officials promised to adopt a proposal outlining the city’s policy of giving preference to local vendors, but no proposal has been presented to the City Commission.

Stacy Gunther, owner of Butter & Cream, said she was not invited to submit a proposal to put a cart on the Square when the city considered proposals from Steel City and King of Pops.

She said her company had asked about the opportunity previously. Following the publication of the Decaturish stories, the company dropped off its proposal at City Hall. The proposal is dated June 13. Gunther said the timing of her company submitting the proposal was a coincidence, saying the company’s vending tricycle was finally ready.

“I wanted Thursday through Sunday and said Decatur is busy and vibrant enough to handle two carts on the square,” Gunther said.

On the agenda item, the city says that the vendor pilot cart program approved back in March “allows up to two vending carts to be located on the area of the Square and Harmony Park.”

But the program the City Commission approved only mentions one local business and says nothing about additional businesses. That one local business turned out to be Steel City Pops, and that company’s proposal was not included on the agenda for the March meeting.

The proposal from Butter & Cream says that the company needs to have a presence on the Square.

“In light of what we bring to the community, we respectfully ask that we are granted the opportunity to have a presence on the Square to remain competitive in what has become an increasingly competitive dessert market,” the proposal says.