Decatur Dinners will be a citywide conversation about discrimination and racism

Decatur Dinners will be a citywide conversation about discrimination and racism 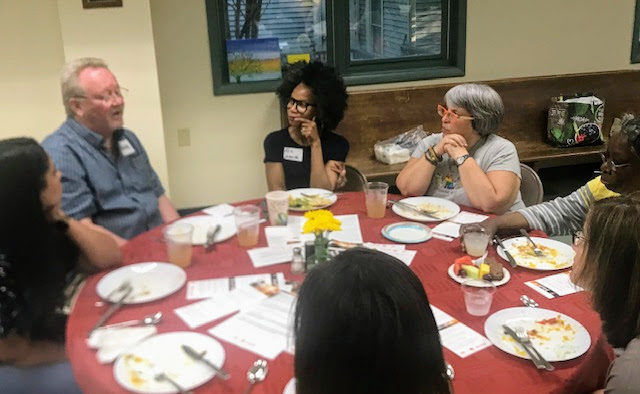 Members of the community gathered for a test run of the Decatur Dinners on April 25. One hundred dinners will take place on August 25. Image provided to Decaturish.
Share

On August 25, 1,000 Decatur residents will gather for dinner and conversations about racism and discrimination.

The event, called Decatur Dinners, will be the first time implementing the “Dinner Dialogue” model on such a large scale, according to Dietra Hawkins. One hundred separate dinners will take place throughout the city, but each dinner will feature an identical format. A 20-minute, one-person play will showcase a scenario meant to provoke questions about race and equity. Dinner, and conversations about the play, will follow.

The event is open to anyone who lives, works, plays or worships in Decatur. Participants have to be at least middle-school age or older.

The idea for a Dinner Dialogue series began in Chicago in the 1990s. One night while Human Relations Foundation director Clarence Wood was at dinner with his colleagues, the conversation turned to experiences surrounding racism and equity. Wood got an idea.

“Why don’t we have these conversations in regular platforms instead of having to designate a workshop for it?”

On August 25, 1,000 Decatur residents will gather for dinner and conversations about racism and discrimination.

The Chicago Dinners were born, bringing together people from all over Chicago’s community to share dinner and talk about their experiences regarding race.

Working toward a PhD in Chicago at the time, Hawkins researched the impact of the Chicago Dinners for her dissertation. She was enthralled with their format; instead of a facilitated workshop, they felt like a genuine dialogue.

“Everybody gets to share their story and it’s not simply a place or experience where people are being talked at, but you’re actually talking with each other,” she said.

Since then, as part of her work, she has organized Chicago-style Dinners across the state of Georgia.

Hawkins facilitated a dinner in January 2018 and Ariel Fristoe participated. Fristoe is the creator of local Out of Hand Theater. Moved by the conversations she had during dinner, Fristoe invited Hawkins to attend “Shaking in the Wind,” a one-woman play performed by Minka Wiltz.

On Sunday, Dec. 2, 2018, Clare Schexnyder opened her Decatur home to 25 people — both friends and strangers — for this performance. Both Fristoe and Hawkins were in attendance.

“Thirty of us too close to each other in my tiny living room,” Schexnyder said. “We laughed. We cried. We felt uncomfortable.”

After the play, they fell into conversation for hours. The local activist, Schexnyder, the lifelong facilitator, Hawkins, and the artistic theater director, Fristoe, realized they all work toward similar goals every day.

“Here are people working on exactly what I’m trying to work on as an artist, just from a very different lens,” Fristoe remembers thinking. “I want to see if we can join forces.”

Their discussion focused on what comes to mind when most people think of equity: the scholastic achievement gap and disproportionate punishment in schools. With City Schools of Decatur focusing on providing Beyond Diversity training to teachers and implementing a new Equity Action Plan, the group discussed the need to bring this conversation into the wider community.

Fristoe, Schexnyder and Hawkins next met for lunch on January 11. Even in this first meeting, they envisioned 100 dinners.

“Ambitious,” Hawkins said with a laugh. But they knew that support for the idea would exist in Decatur, which is why she follows up with, “Ambitious in the sense that it’s also doable … You have a lot of the right people involved and interested in building on a history of trying to bring people together.”

Later that day, Schexnyder ran into Lillie Huddleston, the CSD Equity Director. Huddleston had, in fact, taken Hawkins’ cultural competency workshop a few years ago and the two had stayed in touch.

In her two years as Equity Director, Huddleston has assembled an Equity Advisory Council of 60 community stakeholders. She invited Hawkins to pitch the Dinners idea at the Council’s meeting the following week on Thursday, Jan. 17.

Representatives of the Decatur Housing Authority, the Decatur Education Foundation, the CSD School Board, among others, are on the Advisory Council. Members of Better Together, a community board organized by the city that discusses equity issues, would also attend the meeting.

“We’ll … have everyone we need at the table,” Schexnyder stated in an email leading up to the meeting.

Met with eager responses from the Advisory Council, Schexnyder, Hawkins and Fristoe next began holding weekly meetings of the Decatur Dinners Design Team.

They set about organizing a Design Team that would include representatives from a wide swath of the Decatur community.

“It’s one of those things that you feel like it was supposed to happen and we were just in the right place at the right time,” Schexnyder said. “Everybody wants to have this conversation but it’s a hell of a hard conversation to have.”

“People feel, ‘Oof. Now we’re going to be real and feel safe to talk about these hard things for an hour or two,’” Schexnyder said. “If people are affected by this personal story, they’re much more likely to open up.”

The play covers the experience of being a well-off middle-aged black parent in Atlanta in the current moment, according to Fristoe.

“We’ve tried to remove other causes of prejudice [i.e discrepancies in income or education] so that we can focus just on race,” Fristoe said. “The comment that I have heard the most is, ‘That is my story. You wrote down my story.’”

Since the test run it’s been all about numbers: securing 1,000 participants, 100 hosts, 100 facilitators and 100 actors. According to Schexnyder, they are ahead of schedule in meeting these targets.

Hosts can reserve a small number of seats at each dinner. The Design Team will assign all other guests to a Dinner, with an emphasis on diversity.

Instead of the host directing the conversation, as Hawkins has seen at other dinners, each Decatur Dinner will have a separate, trained facilitator. This person will lead the guests through a discussion of their reactions and personal experiences.

Hawkins will lead a free, one-day cultural competency training at the CSD Central Office on July 19. She will also lead a three-day session from August 6-8.

Schexnyder and Hawkins both see the Dinners as just a launching point for a continued city-wide conversation.

“I have to think the more people we invite into this conversation, the more things will begin to change,” Schexnyder said. “Hopefully we can reach a place where we as a community say we do not accept racism or discrimination and we work together to figure out how to make that happen.”

Click here to volunteer as a host, sponsor, facilitator, actor or guest.