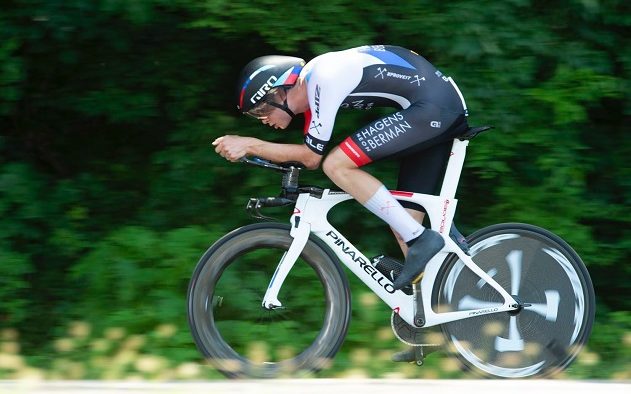 The Time Trial race is appealing to Ian Garrison because of its comparative simplicity and speed. “I like the idea of going as fast as you can for this distance,” Ian said. “When you’re out there, it’s a complete state of focus.” Image provided to Decaturish.
Share

Ian Garrison won the National U23 Cycling Time Trials on June 20. With a time of 36:07, Garrison was 1:52 faster than the second-place rider.

His younger brother, Michael, had his own race later in the day (placing third in the 17-18 age category) but showed up right after Ian won the U23 Time Trial.

“Our van pulled up, and I was able to hop right out and give him a huge hug,” Michael said. “We’d been training together, so I knew how hard he’d been working.”

Ian graduated from Decatur High School in 2016 and has raced professionally with the Hagens Berman Axeon team since, splitting time between racing in Europe and the United States.

Ian normally races with the team and its supporting staff and supplies, but he was the only member racing at the Junior Nationals in Hagerstown, MD.

Seven days later, however, Ian was with his full team in Oak Ridge, TN, as they prepared for the Men’s Professional Road Nationals. The 2017 and 2018 Time Trial champion, Joey Rosskopf (another Decatur High School alum) would not be racing, leaving the field a little more open. Ian suspected he might have a shot at a top-five finish.

Garrison won the United States Men’s Professional Time Trial race on June 27. He is the first cyclist to win both titles in the same year.

When he crossed the line in Oak Ridge, however, he didn’t know he had won the title. In a completely exhausted state and with no teammates in earshot of the announcer, it took a few minutes for Garrison to find out the good news. This time it came not from Michael (who was racing in Wisconsin) but from Ian’s personal coach, who had driven up from Greenville, SC to watch.

“My coach was the first to come over to me,” Garrison said. “He had this huge smile on his face and that’s when I knew.”

Ian will next race in the Tour of Denmark with the Axeon team at the end of August before heading to the World Championships in Yorkshire in September.