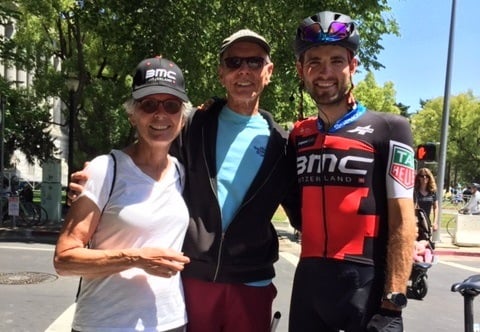 Joey Rosskopf (right) has biked all over the world and his parents have had the chance to see him race often, including during the Giro d’Italia. Image provided to Decaturish.
Share

Decatur High School alum Joey Rosskopf is racing on cycling’s biggest stage this July. From July 6 – July 27, Rosskopf and seven other teammates are competing in the Tour de France.

“I head to the start line with eagerness and even more with gratitude to our team for the confidence they have placed in me since the beginning of the season,” Rosskopf said in a press release from CCC Team prior to the Tour’s start. “When I look at the rest of our roster, I see a bunch of strong, determined, stage hunters and I hope to play that role as well. I think that between us we will constantly be ready to create and seize any opportunity we can for stage success.”

Two stages in, Rosskopf is 33rd in the Tour’s General Classification (the overall individual standings) and the second-best American. His team is in seventh place.

Rosskopf has raced professionally since 2010 and has participated in four Grand Tour events over the past four years. He was also the United States Time Trial national champion, winning the race in 2017 and 2018. With Rosskopf not competing in the time trial this year, another Decatur High School graduate, Ian Garrison, made sure the title stayed in local hands. Winning by 20 seconds on June 27, Garrison secured this year’s Time Trial title.

Joey is not the only Rosskopf to make national cycling headlines in recent weeks. His father, Ken, won two gold medals in his age group at the National Senior Games on June 20. He won both the 20K and 40K Road Races.

Ken and his wife, Linda, will travel to France from July 16-24 with 18 other friends and neighbors to view different stages of the tour. He’s excited to watch his son compete at the “pinnacle” of cycling.

“I know he’s in good shape and he’s motivated,” Ken said. “He’s probably in the best condition he’s been in in his life, so it should be a good outing for him.”