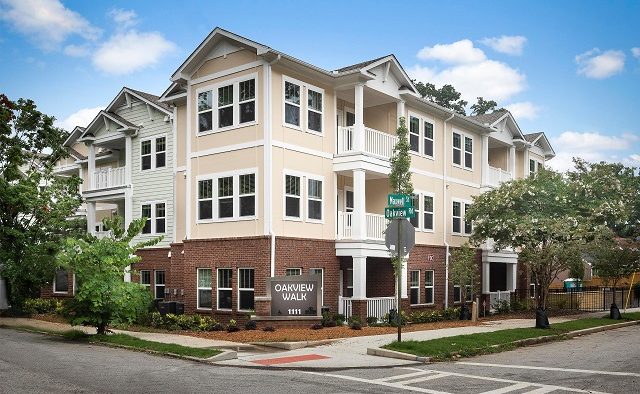 At the grand opening celebration, DHA Executive Director Doug Faust emphasized the amount of time and work that had gone into remodeling the apartment complex.

The apartment complex, located at 1111 Oakview Road, was originally built nearly 60 years ago, Faust said. Although the complex’s location near schools, jobs and other parts of Decatur kept residents there, Faust said the property did not meet appropriate living standards, especially for the elderly and disabled.

Then, the DHA began a revitalization project for the former Gateway Manor complex and the Oakview Apartments, to be conducted in three phases. The completion of Oakview Walk is the third phase of the project.

During construction, the former residents of Oakview Apartments, many of whom were elderly or disabled, were able to move directly into the newly-built Trinity Walk Apartments, while Oakview Walk was re-designed and built primarily for families and working adults.

At the grand opening, Decatur Mayor Patti Garrett said she was excited about the new complex and discussed the city’s plans to tackle affordable housing in the future.

“I remember when (Oakview Walk) was just an idea, and Doug Faust came to the Oakhurst Neighborhood Association with information and sketches of what was to come,” she said. “And, wow, what an asset Oakview Walk is to the neighborhood! We look forward to working together to […] find ways to open the doors to those who are underserved by Decatur’s real estate market.”

Garrett also discussed the City Commission’s recently-established Affordable Housing Task Force, which Faust will serve on, as a sign of the city’s efforts toward improving affordable housing options.

Above all, Faust wants to ensure that affordable housing isn’t something people are ashamed of. He wants these properties to be a point of pride for its residents.