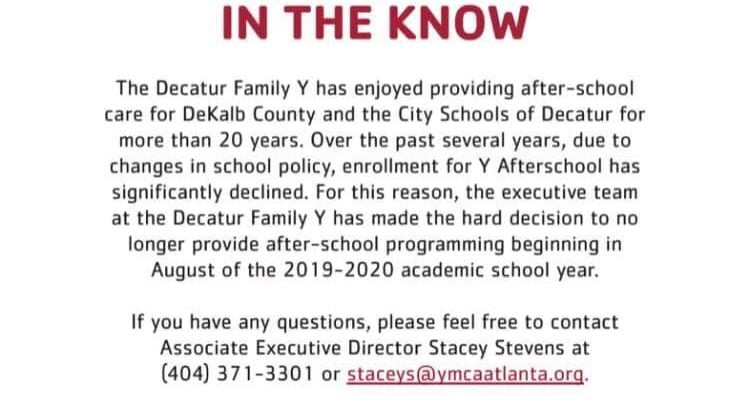 This story has been updated with a response from DeKalb County Schools.

With school set to start in Decatur on Aug. 1 and in DeKalb County on Aug. 5, the Y has decided to end its after-school care program, citing dwindling enrollment.

“The Decatur Family Y has enjoyed providing after-school care for DeKalb County and the City Schools of Decatur for more than 20 years,” the notice to parents says. “Over the past several years, due to changes in school policy, enrollment for Y after-school care has significantly declined. For this reason, the executive team at the Decatur Family Y has made the hard decision to no longer provide after-school programming beginning in August of the 2019-2020 academic school year.”

Parents in the program were upset and confused.

Stacey Stevens, Associate Executive Director for the Y, said a change in DeKalb County Schools’ policies is to blame for the decision.

“The Decatur Y partnered with the DeKalb County School System to provide a quality, Bright from the Start certified program at more than 15 DeKalb County schools,” Stevens said. “Due to changes in policy regarding after-school programming in DeKalb County Schools, the Y’s presence decreased to one school during the 2018/2019 academic school year. We have continued to pick up from nine City Schools of Decatur schools. As of July 22, 2019, the Y had 10 registrations for the after-school program, a 75 percent decrease from this time last year. All schools involved were notified, families with current registrations were notified and money refunded, and participants from the 2018-2019 academic school year have all received an email communication.”

And what were the changes in DeKalb County Schools’ policy regarding after-school programming?

“DeKalb County Schools decided to provide their own after-school programming utilizing their own teachers,” Stevens said.

Decaturish asked why the YMCA made the decision to end after-school care so close to the start of the school year.

“Although the decision to discontinue seems sudden, we have been monitoring enrollment, surveying the DeKalb County schools’ programs, and tracking trends in after school programming for the last few years,” Stevens said. “Our after school program director, Rachel Taylor, tendered her resignation effective August 2. With the drastic decrease in enrollment and no anticipation of that increasing in the coming school years, we made the difficult decision to discontinue the program.”

“Many admire that our internal program allows extended time for school staff to work with students,” the spokesperson said. “In addition, homework assistance from teachers has been a big draw for parents.”

There has been no change in DeKalb County School District policy related to after school programming.

Local DCSD principals make the decision to participate in the district’s After School Extended Day Program. Many admire that our internal program allows extended time for school staff to work with students.  In addition, homework assistance from teachers has been a big draw for parents.

It may be correct that enrollment has decreased in the YMCA’s after school programming over the years. This can be attributed to a variety of factors.