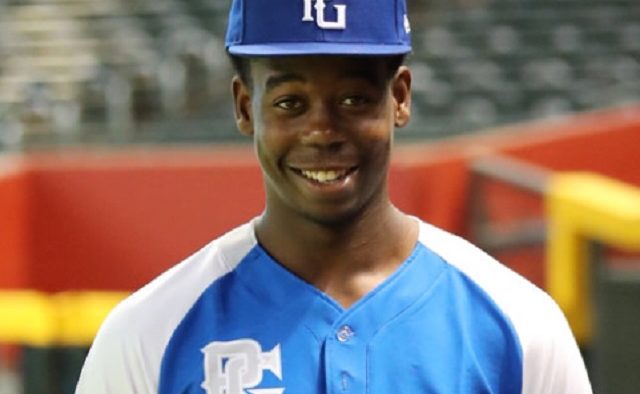 Rising senior Jordan Walker played in the MLB High School All-Star Game in Cleveland, OH on July 6. This inaugural game featured 40 of the top 17-year-old baseball players from around the country. Starting at first base, Walker went 2-for-3 with two RBIs to help his team win 4-2. He was named Player of the Game.

Just playing in Cleveland required a bit of a journey, however. For the three weeks prior to the game, he played as part of the Prospect Development Pipeline (PDP) League at IMG Academy in Bradenton, FL. At IMG, Walker and 79 other players were split into four teams, each with an MLB Hall-of-Famer as head coach. They drilled and played games, all under the watch of MLB scouts, who were looking not only at game play, but also at work ethic and leadership. There was no hiding the scouts’ purpose; they were looking at these players as potential picks in the 2020 draft.

At the end of the three weeks, 40 players were selected to play in Cleveland. Walker’s name was the only from Georgia on that list. He spent the night at IMG, traveled to Cleveland, then played the next day, simply excited to play at the home of the Cleveland Indians.

“It was an unbelievable feeling … No matter what happened I was going to be excited because this is an opportunity that doesn’t just come around very often,” Walker said. “I was just overjoyed and glad I could play in it.”

He was also one of eight players selected to hit in the High School Home Run Derby.

Walker will next travel to California in early August with the other 39 who played in Cleveland. There, he will play for a week under the eye of USA Baseball with hopes of being selected to represent the US 18U team at the World Cup in South Korea in late August.

Walker also just received notice that it won’t be long before he plays again in an MLB ballpark. On Sunday, August 11, he will play with the 49 other top high schoolers at Petco Park in San Diego in the PerfectGame All-American Classic game, aired on the MLB Network.

Whatever happens in August, Walker was thankful for the opportunity to connect with other top players.

“The best part is getting to meet and become friends with people from all over the nation,” he said. “Maybe if I get drafted or play in college and I see them in college or [professional leagues] it will be cool to have already known them and played with them.”

Jordan’s DHS teammates didn’t even know about the game or PDP until their high school coaches told them. They appreciate his team-based and humble approach to the game.

“He is always the first one out of the dugout [to celebrate his teammate] when his teammate goes deep,” graduated senior Robbie Huey said.

While this is definitely his biggest moment thus far, Walker’s had hype surrounding him for years. He tries to stay focused on one game at a time.

“I feel like I know who I am and I know what I can do and if I have a bad game, it happens,” Walker said. “If I do have a good game, it doesn’t mean I’m the best player in the world. I’m playing baseball and trying to enjoy the game I love.”

Walker is verbally committed to play at Duke University after he graduates from Decatur High School next spring.