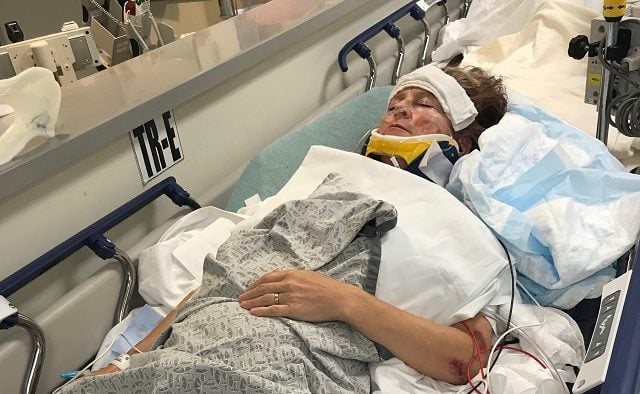 Valerie Warren, a Kirkwood resident, suffered severe injuries when she was hit while riding her bicycle in Kirkwood. Image provided to Decaturish.
Share

A cyclist suffered severe injuries on June 29 when a black Hyundai Accent swerved into a bike lane on Hosea L. Williams Drive in Kirkwood.

Police have a license plate number that a witness wrote down after following the vehicle, but so far police haven’t made any arrests.

“This investigation is still ongoing, and investigators are continuing to follow up on the leads that they have received in this case,” a spokesperson for the Atlanta Police Department said.

The crash occurred near the intersection of Hosea L. Williams Drive and Saunders Street.

The injured cyclist, Valerie Warren, is out of the hospital. Her husband, David, said the driver of the Hyundai fractured his wife’s skull, leaving her with a subdural hematoma, two broken ribs, a broken thumb, a broken collarbone and “a pretty significant concussion.”

David and Valerie live in Kirkwood and own a location scouting company serving the television and film industry, ATL Locations.

“We were riding our bicycles from Kirkwood to go to an Atlanta United game,” David Warren said. “A car swerved into a bicycle lane on Hosea and took off. There was a car behind them that saw and took pictures of the car and license plate.”

There were two witnesses, but neither of them got a look at the driver of the Hyundai, according to the police report.

The Warrens are trying to get the word out in hopes that someone will recognize the owner of the vehicle and contact police.

Working with sources from the community, the Warrens were able to provide video to local news stations showing the suspect’s vehicle.