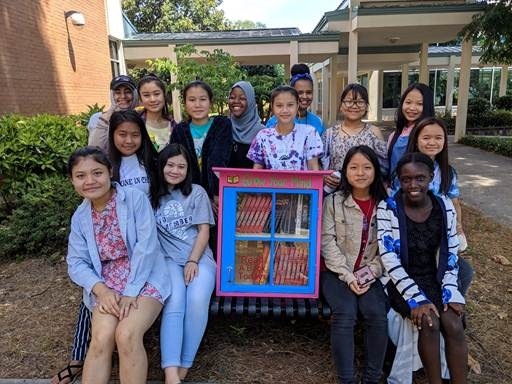 The students worked with the Decatur Makers and House of SpeakEasy to build the library, which will be for the Clarkston High School New Roots Garden, according to an IRC press release.

On June 20, which also happened to be World Refugee Day, the summer campers took a field trip to Decatur Makers, a local maker’s space which facilitates hands-on STEM exploration. There, they learned basic woodworking skills and worked together to build the library.

Later, the students decorated the library according to the theme “Grow Your Mind” with the word “read” translated into their various native languages painted across the top, the release said.

According to the release, students expressed an increased interest in reading – especially young adult fiction novels about characters facing similar immigration experiences – after participating in a daily book club as part of the camp.

The students also received a donation of brand-new books tailored to their interests and cultural backgrounds from the literary non-profit House of SpeakEasy, as part of their summer bookmobile tour.