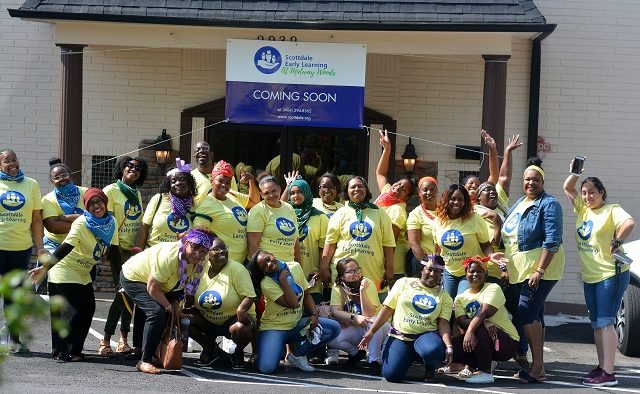 Founded more than 40 years ago in 1977, SEL serves young children in the Scottdale and Decatur area, helping students between 6 weeks and 5 years of age in their intellectual and social development. According to an SEL press release, the organization recently launched a $1.8 million campaign to fund the renovation of the new building, as well as the hiring and training of new staff to care for the students at the new location.

SEL will continue to operate in its current building at 479 Warren Ave. in Scottdale, but with the addition of the second building, the organization will double the number of young children and families served beginning this fall, SEL said.

Located at 2939 Midway Rd. in Decatur’s Midway Woods Community, the new facility will be known as Scottdale Early Learning at Midway Woods.

“I am extremely grateful to our Board of Directors for having the vision to expand SEL’s facilities and staff in order to better fulfill our mission of providing early education that fosters the intellectual, creative, social, emotional and physical development of our students,” Maryum Lewis Gibson, president and CEO of SEL, said.
“Thanks to generous support from the Community Foundation, we were able to develop a comprehensive strategic plan, which gave SEL a clearly-defined road map to achieve our goal of serving more children and families.”

According to Gibson, SEL had several partners, including DeKalb County, who provided financial support to purchase the new building. The largest gift was a $750,000 grant from the Joseph B. Whitehead Foundation/United Way of Greater Atlanta.

SEL has long had a waiting list of families hoping to enroll their children, so expanding student capacity was a key goal of SEL’s strategic plan, the organization said. Improvements were made to the Warren Street facility last year while the organization’s board searched for a second location.

“We found our new childcare facility late last year,” said Gibson. “We already had families from Midway Woods inquiring about our programs, so we knew the need was there.”

SEL at Midway Woods is already licensed to accommodate 100 students, the release said, but will open with approximately 85 students in the fall.