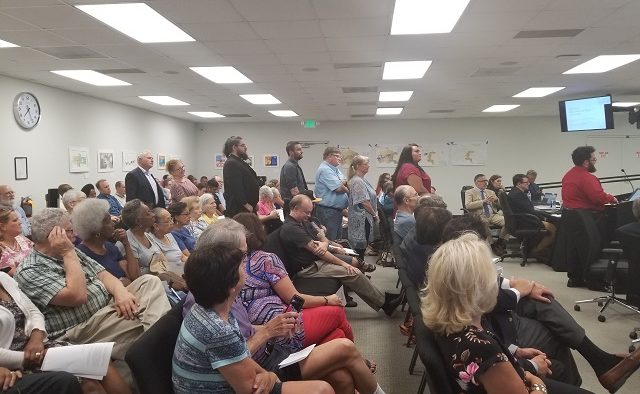 Supporters of Tucker tattoo artist Krystal Roger's line up to speak in support of a motion to allow her to open a tattoo establishment and art gallery downtown. Photo by Cathi Harris
Share

Although Tucker’s Planning Commission recommended approval of the SLUP, the city staff’s recommendation was against the establishment due to the proximity of an existing tattoo parlor, Diligent Lobotomy Tattoo, at 4213 Fellowship Road, Suite B. That location, just 900 feet from the proposed Witching Hour space, would lead to a “disproportionate proliferation of uses,” which is contrary to the guidelines listed in the city’s zoning ordinance, the staff report said.

Supporters of tattoo artist Krystal Rogers, who sought to open the business, packed the council chambers. During comments, 10 people, including property owner Mark Frank, spoke in favor of the SLUP.

“Obviously, I would not agree to rent to her, if I did not feel that this business would be a good fit and consistent with the other businesses in that building,” Frank told the council. “I don’t understand the issue about proliferation. To me, it’s the same as putting a Ritz-Carlton next to a Hampton Inn, or a McDonald’s close to [the local] Village Burger.”

Speaking in opposition to the SLUP, Tucker attorney Carlton Allen said the business use was not consistent with the stated goals of the city’s comprehensive plan for the downtown overlay to create a “pro-business, pro-family” downtown area. Noting that the city in June adopted a new downtown overlay zoning district that would not permit tattoo parlors in that area, Allen encouraged council members to remember that they were not bound by law to issue a SLUP, even if the business applicant met most or even all of stated conditions for approval.

Rogers’ application was considered by the council even though they approved changes to the downtown overlay definition that would prohibit tattoo parlors from locating in that area going forward, Tucker Community Development Director John McHenry said after the meeting. Since the application was in process at the time the change was made, it was considered under the guidelines in effect at the time of her submission.

In making a motion to approve the SLUP, District 3 Councilmember Anne Lerner said she felt that the definition of proliferation was too vague and that there were numerous examples of similar businesses, including those providing similar services, in the downtown area. Since the issue with proliferation was the criteria for the recommendation of denial, Lerner moved that the council approve the permit.

The motion failed with Mayor Frank Auman, Lerner and Councilmember Pat Soltys voting in favor of the SLUP and Councilmembers Noelle Monferdini, Michelle Penkava, William Rosenfeld, and Matt Robbins voting against it.

Asked for a comment after the meeting, some of the opposing councilmembers referred all questions to City of Tucker Director of Communications Matt Holmes.

Following the meeting, Penkava said she came to her decision after careful consideration.

“I spent many weeks considering all of the details related to the special land use request and ultimately supported staff’s recommendation for denial,” she said.

Monferdini said her vote was simply about stopping “proliferation.”

“First let me say that I am not against small business, local entrepreneurs, or tattoos. In fact I support all of those and welcome and embrace them into our community,” Monferdini said in an email. “My vote was only for proliferation, as the proposed use is consistent with the Downtown Character Area, the proposed use does not comply with all the Criteria (standards and factors) for special land-use decisions provided in Section 7.4.6 of the City of Tucker Zoning Ordinance. As there is already a tattoo parlor in the Downtown area,  there would be a disproportionate proliferation, and based upon the findings and conclusions our staff recommended denial …

“Further, zoning districts and overlay regulations for future use help to reduce some of the other things like fast-food restaurants being too close together, or a pain point of many here of the plethora of tire shops that strewn the length of Hwy 29. The community along with businesses came together during the Comprehensive Plan Process and spoke life into what areas they wanted all facets of uses from residential too commercial as well as what and where all uses were appropriate.”

Robbins said “proliferation” wasn’t the only issue with the application.

“I voted for what I believed is the best use in that area for Tucker,” Robbins said. “Proliferation is just one of the issues to be weighed for ‘special land use’ applications. This is presently a legislative decision responsibility for the Council. Supreme Court dicta indicate that most likely will change to make SLUP decisions judicial.

“As was evident, the council  made its decision weighing many factors. We will continue to do such on future actions while serving as council for the city of Tucker. One final point I wish to address deals with our commitment to women’s and minority-owned businesses. As you will note, in the 40 months of our formal existence we have demonstrated a welcoming partnership to businesses. I want to point out that over 43 years in federal service, I was extensively involved in creating opportunities for, and ensuring utilization of small, minority and women’s businesses. I received many awards from the Department of Commerce’s Minority Business Development Agency programs throughout the 8 Southeastern States. I encourage the same as city-awarded contracts and for entry of new businesses in Tucker.”

In other business, the council:

-Voted unanimously to approve a contact with F.H. Paschen, S.N. Nielsen and Associates, LLC,  in the amount of $294,577 to repair signage and street markings at various major intersections throughout the city. $170,000 of the funds will come from a grant through the state Department of Transportation’s Local Maintenance and Improvement (LMIG) grant program, with the remaining matching funds coming from Tucker’s portion of DeKalb Special Purpose Local Option Sales Tax (SPLOST) funds.

-Voted unanimously to add five landscape design contractors to the list of approved on-demand vendors to be used for city work. The landscape specialists will be used by the Department of Parks and Recreation as the implement recommended improvements from the Tucker Parks Master Plan.

– Held a public hearing and first read of an ordinance to rezone the lots at 4260 and 4270 Lawrenceville Highway from residential (R-75) to commercial (C-1) to allow construction of a shopping center and a SLUP to allow a planned Arby’s restaurant there to have a drive-thru. A second read, public hearing and final vote is expected to be taken at the City Council meeting on August 26, 2019.

The council also heard the first read of an ordinance to amend the City of Tucker Comprehensive Plan to include the Tucker Transportation Master Plan. At the public hearing, several residents of Cooledge and Brockett Roads objected to parts of the master plan that called for widening Cooledge and adding bike lanes and pedestrian paths on Brockett.

Correction: An earlier version of this story incorrectly identified Anne Lerner as the council member from District 2 instead of District 3. This story has been updated with the correct information.