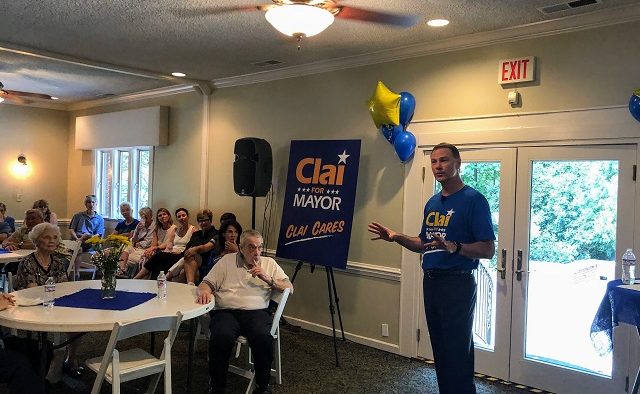 A reporter for Decaturish arrived early at the Lake House on Saturday, Aug. 24, to attend Clai Brown’s kick off party for his mayoral campaign in Avondale Estates.

After the reporter identified herself and the publication she was writing for, she was asked to leave. Brown, the former city manager of Avondale, and his supporters said they did not like the recent story published in Decaturish concerning his employment contract and his departure from the city. To read the full story, click here.

But before the kick off event started, Brown decided to let the reporter stay and cover it.

There were about 100 attendees there and most were longtime residents of Avondale Estates. A few of them made a point of speaking to Decaturish to defend Brown, his character and history with the city.

“I know Clai Brown as an upstanding person who has done wonderful things in his life and in this city,” Lindsey Hunt-Phillips said. “I have known him for years and I just want you to know how much respect and admiration we have.”

Brown himself started his speech recounting his life as a young athlete at Avondale High School and then his history working at Home Depot.

Brown spent 22 years at Home Depot, retiring in 2002 to start a real estate business. In 2005, he took a job with a company that provided services to 368 Home Depot stores in the Southeast Division and Puerto Rico.

He was the city manager of Avondale Estates for 10 years prior to his departure from the city in 2018.

In his campaign announcement, Brown said he left the city in 2018 because the City Commission meddled with the operations of government.

“Not adhering to the city charter made it difficult for me to do my job to the standard that I believe best served the interests of the residents and business owners,” he said in his campaign announcement. “I care about the future of Avondale Estates and the quality of life it offers.  My focus is always on the betterment of our city, making Avondale Estates a safe place to live, work and raise a family – making sure every resident and business thrives.”

It was obvious that the story surrounding Brown’s contract was top of mind at the kick off party.

Brown addressed the “noise,” as he called it, stating that the “noise is unfortunately my contract.” He went on to say, “everything was done as to the law. I did not hide [any] contract. It was always in the city clerk’s office, by law, where it was supposed to be.”

As the crowd reveled, Brown said that signals — not noise —  were what he would focus on as mayor. Signals are “listening to and showing respect to the residents, public works and the police,” he explained. Brown continued his address saying that government is about serving the people and that he would respect everybody’s voice.

Brown spoke for about 25 minutes.

Here is an audio recording of Brown’s remarks during his campaign kickoff event:

While he was well regarded during his time at the city, his departure was a messy one. In December 2017, Brown announced his resignation but changed his mind when the city informed him it wouldn’t pay him a severance. The city threatened to fire Brown after he announced and then rescinded his resignation, records provided by the city show.

If the City Commission had honored an amendment to Brown’s contract that included the severance, it would’ve owed Brown about $300,000. The severance would’ve been a year’s salary – Brown made about $180,000 per year – plus all the accrued vacation and sick leave. Eventually the city and Brown settled the dispute for around $100,000. The city contends that contract amendment wasn’t properly approved in a public meeting.

Brown’s opponent, incumbent Mayor Jonathan Elmore, has previously told the AJC he didn’t know about the contract amendment with the severance agreement until Brown resigned.

Other commissioners agreed with Elmore’s version of events.

In an interview with Decaturish on Aug. 27, commissioners Brian Fisher and Adela Yelton said they were unaware of the severance in Brown’s contract and didn’t learn about it until he resigned.

“It was [City Attorney Bob Wilson] who made us aware of the contract at that point and time,” Fisher said. “We had no clue until after he quit.”

Fisher said Decaturish.com’s recent story about the severance in Brown’s contract was “absolutely spot on.”

“We learned of the amendment when it was provided to us after he resigned,” she said.

Martha Perego, ethics director for the International City/County Management Association, said she’s never heard of a severance agreement like the one Brown received.

“The severance provision exists to provide financial compensation when the governing body determines they no longer want that individual to serve as their manager,” Perego said. “Because in this business, managers are at-will employees. They know there could be a new election. A change in goals of the council at any moment could trigger their termination. The severance exists to provide a safeguard for when that happens. It’s not triggered when somebody voluntarily leaves the position to take another position or they no longer want to work for that organization.”

When asked if there were any examples that are comparable to Brown’s severance, she said, “I’ve never seen a situation where somebody voluntarily left a job and got a severance.”

Editor and Publisher Dan Whisenhunt contributed reporting to this story.