At its regular meeting Tuesday night, the Decatur Planning Commission voted to recommend denial of a eight-home subdivision planned for the property at 258 Forkner Drive.

The developer, Footprint Properties, LLC wants to build a mix of attached and detached houses as well as add a new street on the one-acre lot currently occupied by a single 10-unit apartment building. To do so, it must get permission from the City Commission for a new subdivision, as well as a special exception to the city’s building standards to reduce the required rear setbacks from four of the houses and reduce the width of the sidewalk along Forkner from six feet to five feet in width.

Attorney Laurel David, who is representing Footprint, told the commission the developer has made significant changes to the site plan at the request of neighboring residents, including reducing the plan from 13 townhomes to the current eight-unit configuration and agreeing to build a solid wall instead of a privacy fence along the western edge. 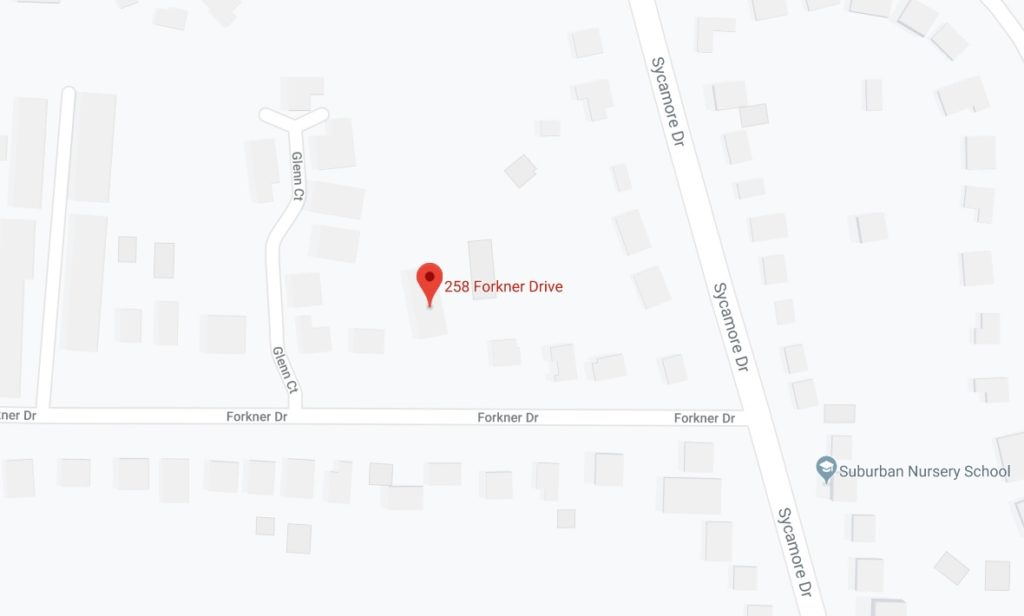 To see the site plan for the project and the city’s map showing where the lot is located, click here.

“We have been working on this for almost two years now,” she said. “We have had several meetings with the other property owners. There are some issues left to be addressed, but we are confident that we can get those done by the time it goes to the City Commission. We request that it move forward tonight.”

But in a packed meeting room, several nearby residents still expressed vehement opposition to the development.

“We just got the letter [from the developer] agreeing to the wall today at 3 p.m.,” he said. “We would request that the commission defer this one more time to give us time to go back to the owners and get their feedback. We agree that they have been willing to work with us, and we think we can get to a point where we could support this request, but we are not there, yet.”

He pointed out that the proposed subdivision would contain the same number of homes as the Glenn Court subdivision but on a site half the size. He said that the developer needs significant exceptions for the rear-yard setbacks, and some for front and side yards where it does not meet code, in order to build it out. He also noted the developer was including the landscape buffer to meet the zoning ordinance’s required “amenity space” for residents.

“There’s a lot of things that are being shoved in here and – to use an old expression – you have 10 pounds of flour in a five-pound sack,” Daughdrill said. “I don’t know that all of the conditions that we would try to negotiate would address all of the site issues, but it would at least make it more amenable to the adjacent property owners.”

But other property owners outside Glenn Court said they had not been approached by the developer at all, and had no input into a site plan that would significantly affect their property.

“The fence they want to put at our property line would kill all of my trees on that side,” said Catherine Fox, who owns the house on the east side of the planned development.

If the exception for the rear-yard setback is granted, the development would place 40-foot tall houses five feet from her property line, instead of the normal 30 feet, which would shade her yard and affect her family’s privacy. She presented the commission with a petition signed by 120 nearby property owners objecting to the subdivision development.

Some other speakers questioned why a developer would be granted several special exceptions to the city’s development ordinance when individual homeowners had been denied similar requests in the past, also noting that Footprint’s owner, Erik Pawloski, is the chair of the Decatur Zoning Board of Appeals (ZBA).

“The requirements that are outlined in the Unified Development Ordinance were put in place with the knowledge that [city leaders] could not foresee every possible situation and there might be some instances where the requirements would place an undue hardship on a particular property owner – or where an exception might be in the best interest of the community,” Buckley said. “It is not bad or improper that he is here asking for the exceptions. That is what this process is for.”

In addition to the request for exceptions for sidewalk width and the rear-yard setbacks, City Planning Director Angela Threadgill told the commission that there were still some discrepancies between the city’s measurement of the individual lots in the plan and those provided by the developer’s engineer.

“I have had two of our other city planners look at it and they have both come up with different numbers, but that also don’t correspond to the ones provided by their engineer,” she said. “The solution – depending on how things proceed tonight – would be for their [consultant] to provide the CAD files for an analysis by an outside engineer.”

The planning department also believes the proposed buffer wall would encroach on what should be the city’s right-of-way for maintenance of the new road, Threadgill added. And, the use of the landscape buffer to meet the amenity space requirements does not really meet the spirit of the ordinance.

“An amenity space is usually something that residents can go into and use – like a sports court or a pool,” Threadgill said. “The landscape buffer does not really meet that standard.”

During discussion, Planning Commission members debated whether the matter should be deferred – even against the request of the developer – in order to resolve the questions about the lot sizes and setbacks and to get input on the impact to property owners other than those along Glenn Court. They ultimately decided to vote as requested.

With commission member Gregory Chilik abstaining due to a possible conflict of interest, and commission members Todd Ohlandt and Mike Travis absent, the remaining members all voted in favor of a recommendation to deny the application.

“I am generally in support of people being able to be to exercise their property rights, and am also in support of the granting of exceptions and variances, particularly when they result in some sort of benefit to the wider community or at least a benign impact on the larger community,” commission member Scott Doyon said. “That being said, there are just a lot of externalities – a lot of impact – that are being pushed onto the neighbors and that tips it into the negative column for me.”

Buckley, the commission chair, agreed, saying that he felt the site’s shape and size made it “problematic” in that it would require numerous exceptions to be able to develop to that extent.

“Even though it seems you are going to less density – moving from 10 units to 8 – in reality you are going from one small apartment building to a development that would consume the entire site,” he said.

Member Lori Leland-Kirk said she was also concerned about the impact of adding another street that would feed onto Forkner there. Recent increases in street parking have constricted the traffic lanes, making it difficult for two lanes of travel or for larger vehicles like school buses to get through.

“Forkner is not just a ‘cut-through’ street, it is also one of the few that connect east to west in that area,” she said. Noting that there had not been a traffic study or an study of the tree canopy, she said she could not support the application.

The commission’s recommendation will be forwarded to the City Commission, which will make the final decision on the developer’s application at its meeting on Monday, August 19.