Deportation Bus candidate says, ‘I should not have run for governor’

Deportation Bus candidate says, ‘I should not have run for governor’ 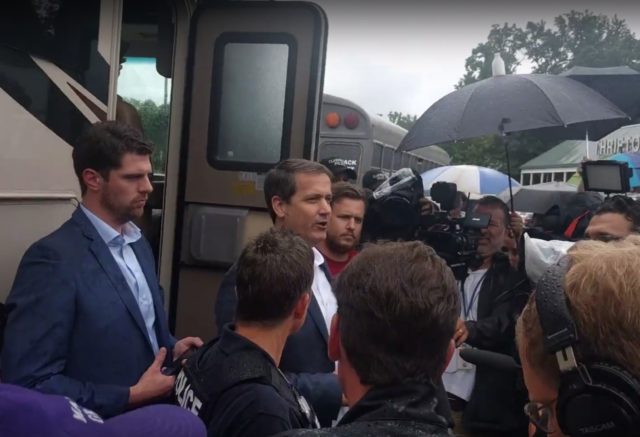 That didn’t pan out and he came in dead last in that election. But Williams, whose deportation bus purported to carry “murderers, rapists, kidnappers, child molestors and other criminals” is now saying he shouldn’t have run for governor.

“I should not have run for Governor or allowed my public persona to be so drastically changed to something it wasn’t,” he said in a letter to his supporters. “Don’t get me wrong, I believe unequivocally that we need a fearless conservative who supports life, our 2nd Amendment, immigration laws and enforcement and all the other issues I ran on during my campaign. I shall continue to vigorously defend and support these issues and our constitutional rights. I should have found a gubernatorial candidate whom I could support. I should have done what each of you did.”

He isn’t, however, making an explicit apology for the deportation bus though he made a veiled reference to it in his letter.

‘While supporting the issues I believed in, I allowed my campaign to do it in a way that was not representative of who I am,” he said. “… My campaign became solely about doing whatever needed to be done in order to create headlines to build name ID.”

He also said reports that he accepted a plea deal to resolve charges of filing a false report are not “fake news.”

According to the AJC, in May of 2018 Williams said someone burglarized his office in Gainsville and made off with computer servers worth $300,000.

“Williams was charged with lying to a Georgia Bureau of Investigation agent when he said he was at home in Forsyth County, not in the Gainesville area at the time of the purported burglary,” the AJC reports. “The indictment also accuses him of making a false insurance claim related to the servers.”

Williams told his supporters, “The truth is, much of what is being reported is correct; I did accept a plea deal, and I am guilty, but not for what I was charged.”