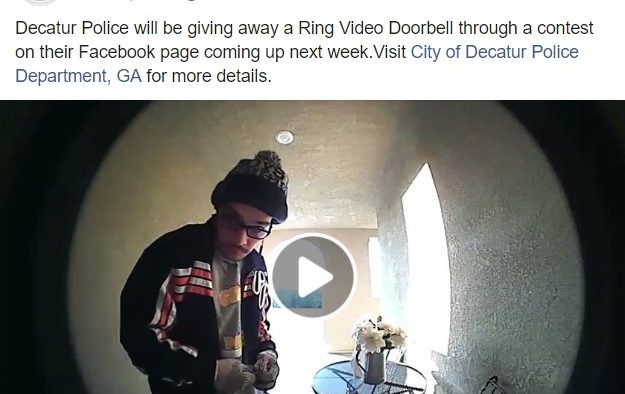 An alert reader passed along an article from Vice about an agreement between Amazon – the owner of the Ring security camera system – and the Lakeland, Fla. Police Department.

“Amazon’s home security company Ring has enlisted local police departments around the country to advertise its surveillance cameras in exchange for free Ring products and a ‘portal’ that allows police to request footage from these cameras, a secret agreement obtained by [Vice] Motherboard shows,” the story says. “The agreement also requires police to ‘keep the terms of this program confidential.’ Dozens of police departments around the country have partnered with Ring, but until now, the exact terms of these partnerships have remained unknown.”

The article discusses the concerns that arise from this arrangement, saying it allows police officers to gather digital evidence without a warrant.

Decatur Police have advertised giveaways of Ring cameras via its Facebook page, but Lt. Jennifer Ross said the department doesn’t have an agreement with Ring like the one described in the Vice article. Ross notes that the police department often obtains evidence voluntarily provided to them by people with security cameras, which doesn’t require a warrant.

“We have given away Ring products through social media contests,” Ross said. “I reached out to [security camera companies] Ring, Nest and Arlo in early 2017 and asked if they would donate products to be given away through social media contests. Ring was the only company that contacted me back. A representative then asked if we wanted to host an informational session about Ring and we did so on April 30, 2017.

“During that presentation the law enforcement program was mentioned, but it was not yet operational. As I understood it then, the plan was to allow a police department access to the videos that were being shared by Ring product owners through the Ring Neighbor’s App where Ring product owners can opt in to share their videos to other Ring owners in a certain geographical area around their location. I told the representative I worked with to set up the presentation to contact me with more information about the law enforcement program when it was operational. Ring was then sold by its creator to Amazon in 2018 and the representative I had worked with no longer worked with the company.”

Ross acknowledges that home security camera footage is useful for investigators, but said the department wouldn’t agree to promote a specific company.

“We do find home surveillance cameras to be very helpful when we are investigating cases,” she said. “We regularly canvas around locations where incidents have occurred to ask if homeowners have cameras. We are often provided with video footage from these types of systems. We also see the footage being shared on neighborhood social media platforms and see residents asking neighbors to check their cameras after something has happened. We see footage from Ring, Arlo, Nest and cameras installed by the homeowners or their alarm companies. We would not enter into any agreements requiring endorsement of a particular company. We may however, join programs allowing law enforcement access to video that is already being shared with neighbors.”

Ross said the cameras the department has been giving away in its Facebook promotions were the same ones Ring provided in 2017.

“The Ring representative told me to continue to give them away until I ran out because he did not want to ship them back,” she said. “I only have a handful left. Ring has since developed new products and I plan to contact them and ask for something new to give away at some point.”

She noted that the department gives away other products via Facebook promotions, like headphones. The goal of these giveaways, she said, is to grow the department’s Facebook presence and educate the public.

“Giveaways are fun for the followers, informational and can be tied in to target education around something specific,” she said. “The giveaways receive a lot of engagement, likes, shares and comments, which reaches more people. Depending on the item, the giveaway can serve as a way to educate or raise awareness. We used giveaways of bluetooth and car mount devices leading up to the new Hands Free law taking effect. Most recently we had a student in our Women’s Self-Defense course introduce the Aftershokz bone conduction headphones when the class was talking about how vulnerable you can be when exercising and wearing earbuds or headphones.”

She added, “We have also given away a $50 gift card to Uber for New Year’s Eve to promote NOT driving after drinking.”

Here are some of the promotions for Ring products that have appeared on Decatur Police Department’s Facebook page: 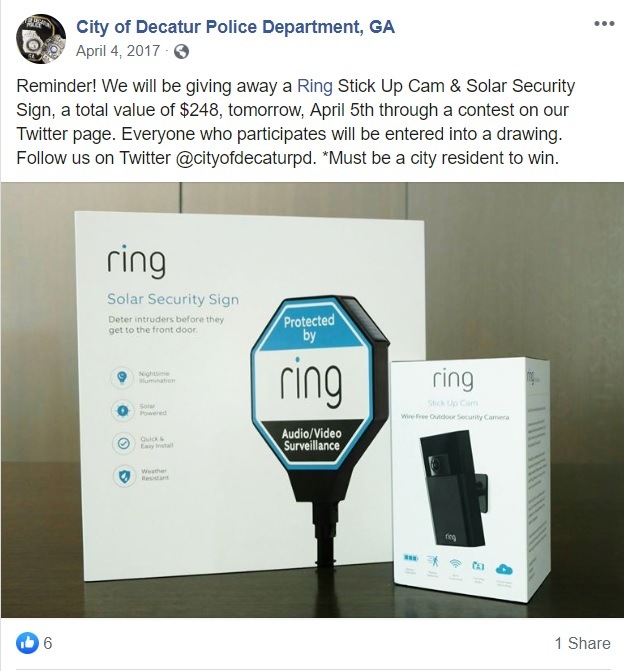 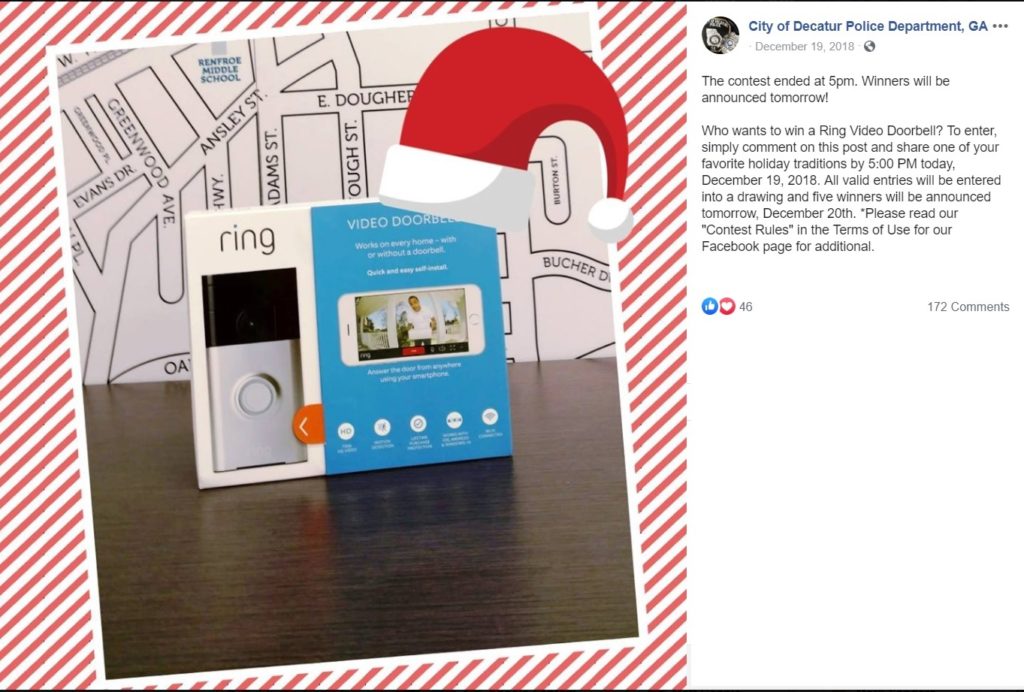 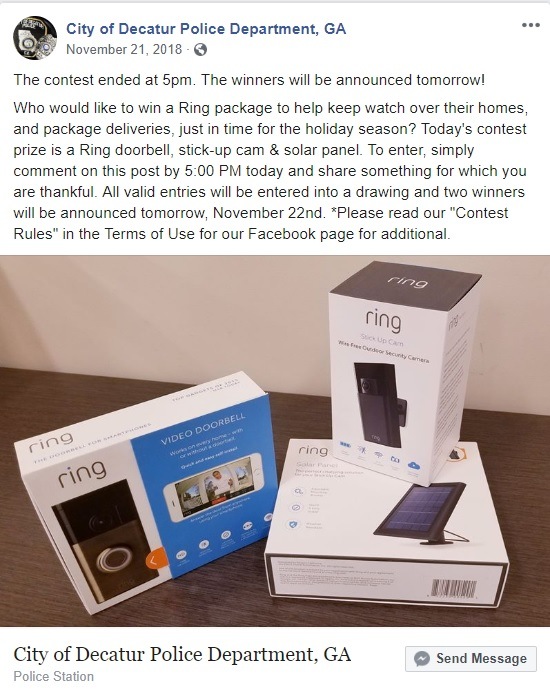 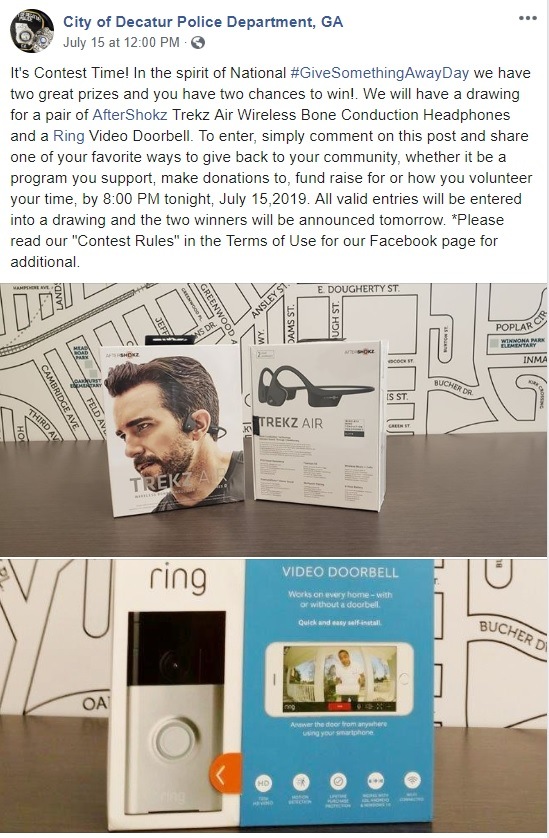