Mending race relations in Decatur, one dinner at a time

Mending race relations in Decatur, one dinner at a time 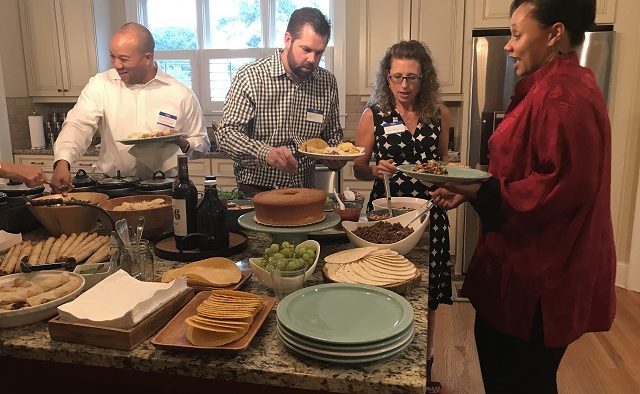 Sunday evening began with pleasantries, as black and white strangers greeted each other with potluck dishes and smiles – and a dash of trepidation.

From large social halls to intimate homes, on Aug. 25 Decatur Dinners brought together 1,200 people to eat, drink and discuss race. The idea to host 100 dinners grew, resulting in last-minute additions to accommodate a long wait list. Even Revival restaurant closed for the evening to host five tables of participants, said organizer Clare Schexnyder.

At the home of Dr. Michelle “Kanika” and Jason Sims, 10 Decatur residents (six black and four white) wrestled with topics including segregation in the Deep South, passing as white, the school to prison pipeline, police brutality, untold history, and socioeconomics.

Playwright Minka Wiltz was on hand to perform her one-woman play, “A Few Honest Moments with Sam,” a thought-provoking reading of one black woman’s journal. Wiltz’s play was performed by other actors at each of the 100 dinners. 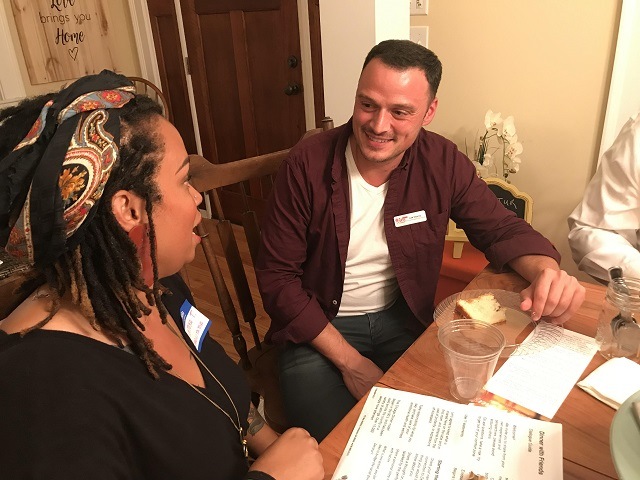 LaToya Tucciarone, facilitator, and Lee Osorio, actor and playwright from Out of Hand Theater. Photo by Logan C. Ritchie

After the performance, diners piled plates high and gathered in the Sims’ dining room. Facilitator LaToya Tucciarone opened with introductions around the table. First topic: Decatur’s reputation as a progressive community with liberal-minded families and excellent schools.

Yet, Dr. Sims noted, “I have to seek out blackness for my kids. My son is on an all-black basketball team in south DeKalb. We go to a predominantly black church. When we looked at Decatur, we wanted to live in a place with black professionals and somehow, we ended up in a white town. Did we make the right decision?”

Runako Godfrey, father of two girls, asked, “When will you know what the right decision is?”

Tucciarone, a black local business owner and mother of four, led the conversation to deeper subjects.

Louis McLeod shared his experience growing up in lower Alabama in the 1950s.

“I wasn’t in school with people of color until I attended Emory University,” McLeod said. “I have been influenced by my religious education where every person is valued. If I love God, I have to love everyone. I’m here tonight partly because I hang around people who look like me.”

As the group cleared the table for dessert, casual conversation turned to Chick-Fil-A, Christianity, Alabama politics, and white privilege.

The evening ran long, and a couple of participants departed early. The group resolved to host neighborhood porch parties, recruit non-white friends to move to Decatur, and share the New York Times’ 1619 project with children.

A proposal for the group to meet again next month was met with applause.

At other dinners, participants vowed to engage with neighbors about race, read books on race relations, and encourage others to attend the next Decatur Dinner.

After the event, Schexnyder wrote on her blog, “We talked about hard things, we showed up, we shared a meal, we welcomed strangers into our homes – and we left as friends. We are committed to work together to change our city in radical ways.”

To accommodate the wait list for last night’s event, Decatur Dinners is planning to meet again in September. For more information, visit www.decaturdinners.com.

Correction: An earlier version of this story misquoted someone. This story has been updated to remove the incorrect quote.